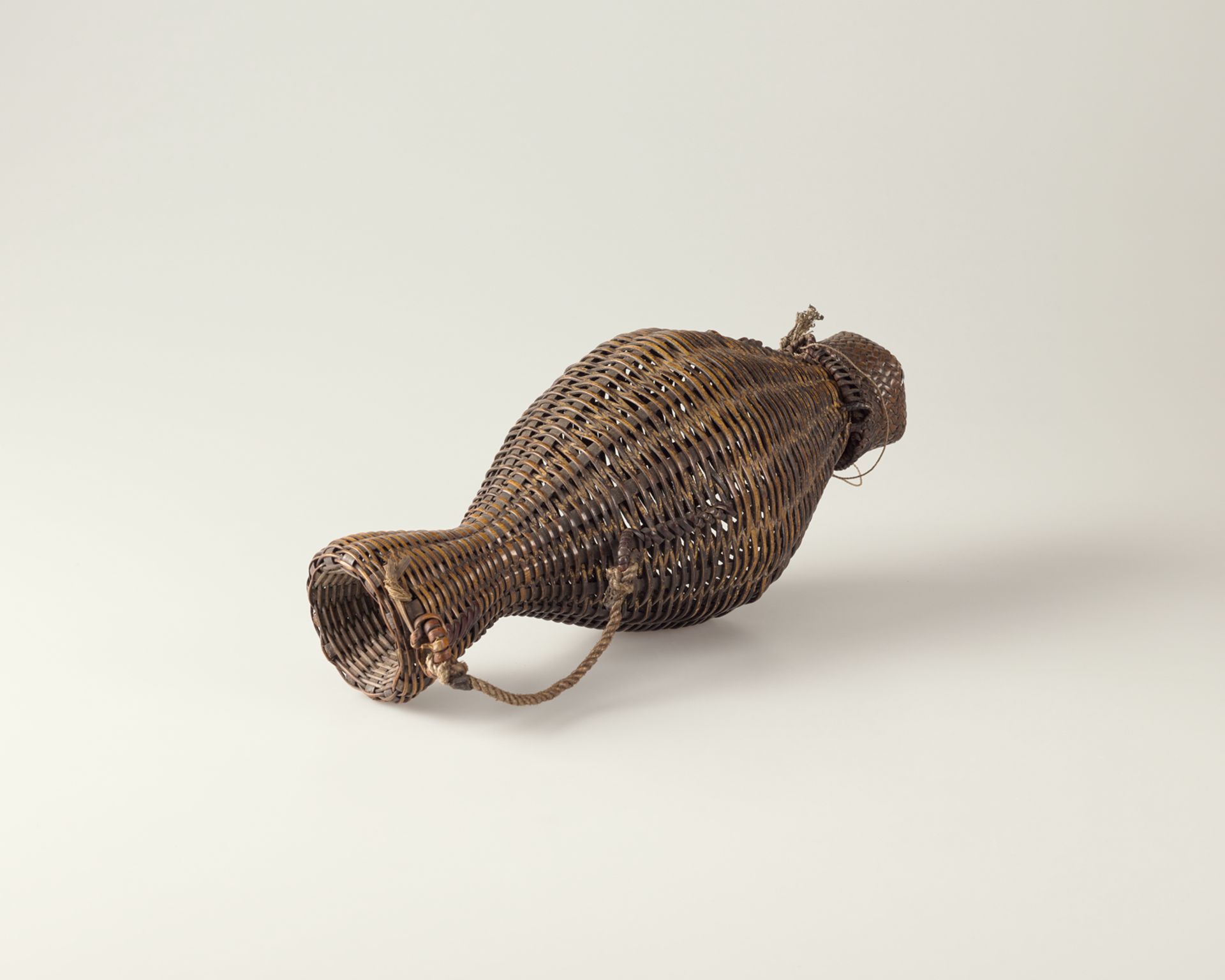 The Linden Museum in Stuttgart has a total of 316 Philippine objects cataloged in its internal database - with only 99 objects published in its online collection. A majority of the 99 cataloged objects now online on the MPMC site are from the Philippine Cordilleras.

In 2016, the Museum produced a virtual exhibition of the Linden-Museum’s Philippine Cordilleran collections as the result of a three-month residency of Prof. Dr. Leah Enkiwe Abayao at the Linden-Museum. Being herself a member of the Ifugao people and having grown up in a traditional Cordilleran village, Prof. Dr. Abayao developed the concept of this exhibition in dialogue with the Linden-Museum’s South and Southeast Asia Curator, Dr. Georg Noack. Together they have chosen to call most objects by their indigenous names and to place each object in a category named after a traditional cultural context rather than after analytical categories alien to Cordilleran traditions. All texts about landscapes, cultural contexts, and all descriptions and interpretations of the objects are Prof. Dr. Abayao’s. The virtual exhibit can still be accessed online here. http://www.cordilleran-collection.de/index.php/en/

From both Dr Abayao's and Dr Noack's research, the Cordilleran collections at the Linden-Museum Stuttgart can be traced to three collectors with only twelve objects coming from different sources. The largest group of 87 objects, mainly ritual objects and a few pieces of dress and adornment of the body, comes from the German journalist and amateur collector Christian Roll who traveled and worked in the Philippines during the 1970s, at a time when many Cordillerans were urged by Evangelical missionaries to part with such "pagan" objects.

Another group of about 20 objects was given to the Linden-Museum by Gustav Niederlein and William P. Wilson, the curators of the Philippine Exposition at the 1904 World Exposition in St. Louis. These objects, predominantly weapons and other objects that could be linked to “headhunting”, had been exhibited in St. Louis to demonstrate the necessity of American “civilizing missions” in the Philippines. They thus show the entanglement of the Linden-Museum into colonial projects, even if - in this case - it was American rather than German projects. 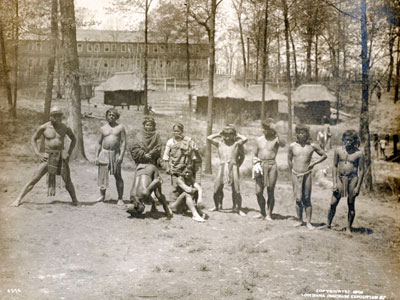 Philippine exposition for the 1904 World Fair in St Louis
Gustav Niederlein grew up in Germany, but later emigrated to Argentina and was a strong proponent of colonialism: he advocated German settlement in Argentina, participated in the “Conquest of the Desert“campaign (1870-1884) that destroyed indigenous cultures in Patagonia to make their land available for white settlers, and advertised Argentina’s suitability for settlement as a curator of the Argentinean expositions in the World Fairs of 1889 and 1993. This made him a sought after expert who was hired as an advisor and contributor, among others by William P. Wilson’s Commercial Museum in Philadelphia and the French colonial museum in Paris. From 1894 onward he was in contact with Count von Linden, the founder of the Linden-Museum, who was interested in acquiring objects from Niederlein. After the American conquest of the Philippines, the US government commissioned Niederlein and Wilson to create a Philippine exposition for the 1904 World Fair that would provide a justification for the American “civilizing mission” there. Niederlein did this by displaying members of indigenous groups in a human zoo. Among them were also Cordillerans who had to perform “headhunting” dances and “savage rituals” for the visitors. Later, Niederlein sent some of their objects to Count von Linden, hoping that von Linden would recommend him for an order of merit from the King of Württemberg. 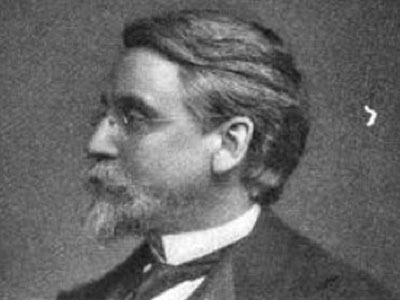 In 1893 William P. Wilson, a professor at the University of Pennsylvania, attended the World Fair in Chicago and suggested the development of a permanent World Fair museum about the merits of international trade. He purchased much of the fair's exhibits as a basis for the Philadelphia Commercial Museum that opened four years later. The purpose of the museum paralleled Count von Linden’s museum in Stuttgart, first conceived in 1889 and funded by the Württemberg association for commercial geography. Wilson therefore soon entered into an exchange relationship with the Linden-Museum. After the American conquest of the Philippines, the US government appointed Wilson together with Gustav Niederlein to a curatorial board that was to create a Philippine exposition for the 1904 World Fair, where it was to provide public justification for the American “civilizing mission” there. They displayed Cordillerans and members of other indigenous groups in a human zoo and had them perform rituals and dances for the visitors of the world fair. Wilson was first appointed to chair the board, but later discharged because the government was not satisfied with his work. He could, however, secure some of the objects on display for his museum and some as of his exchange partners including count von Linden.

Another major collector and more contemporary, was Christian Roll, a German journalist. He reported from wartime Vietnam, Laos and Cambodia, from the Philippines and many other places in Asia. His autobiography “Straße des Glücks” (“Street of luck”) portrays him as an adventurer who was not afraid to report from even the most dangerous places. However, it also shows him as a heavy drinker and playboy who had many “girlfriends” and frequented red-light districts. Due to his lifestyle, he was permanently in need of money, a problem which he sought to solve by buying antiques from Asian markets and reselling them to German collectors. Over time, he developed expertise and contributed a few articles to international collectors’ magazines. The Linden-Museum’s Asia curator (1955-71) and later director (1971-1986) Dr. Friedrich Kußmaul, was a frequent customer of Roll’s and purchased several hundred objects from him. Roll’s correspondence with Kußmaul indicates that he bought the Cordilleran objects in the 1970s from Philippine markets and dealers. He also traveled together with William Beyer, the son of Henry Otley Beyer, an American anthropologist and scholar of Cordilleran indigenous culture. Due to intense Evangelical mission campaigns in the Cordilleras, many old ritual objects were either destroyed or sold for little money on the markets during that period, as their original owners were told to make a radical break with their past beliefs.

Aside from these three major collectors, small groups of very early objects are from German collectors Heinrich Spitz and Gustav Möricke respectively, about whom little is known so far.

*Extracted from research and notes from Georg Noack, head of the South and Southeast Asia department at the Linden-Museum.

Browse 98 Items in this collection.