Axe-adze from Mindanao, from Pitt-Rivers’ founding collection that was displayed at the Bethnal Green Museum.
Philippine Objects at the Pitt Rivers
by Samantha Chen*

The Pitt Rivers Museum is a museum displaying the archaeological and anthropological collections of the University of Oxford in England.  Since its establishment in 1884, the Pitt Rivers Museum has become famous for its characteristic arrangement of artefacts arranged by type into a ‘democracy of things’, rather than by time or region.
The Founding Collection 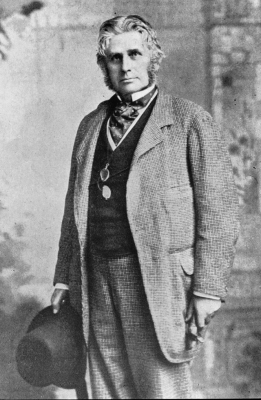 General Augustus Henry Lane Fox Pitt-Rivers
The Philippine collection begins with the founding collection of the Museum’s founder and namesake, Augustus Henry Lane Fox Pitt Rivers. Pitt Rivers had built up an extensive collection of approximately 20,000 to 25,000 objects through a network of art dealers, ethnography and auction houses, and antiquarians. 10,000 items of Pitt Rivers’ collection were exhibited at the Bethnal Green branch of the South Kensington Museum in 1874. The founding collection was subsequently gifted to the University of Oxford, where it was housed in the purpose-built Pitt Rivers Museum. [1] The collections were arranged by function and type, and notably featured quotidian objects as well as ‘works of art’. Underwriting Pitt-Rivers’ display of his collections was a desire to show, through ‘various products of human industry’, the evolution and ‘succession of ideas’ of man from his ‘primitive condition of culture’ [2]. This notion of the hierarchy of cultures, so typical of the colonial era [3], has since shown itself problematic.

The Philippine Objects
Among the founding collection were five items from the Philippines – an axe-adze (seen at the top of this page), three keris, and an animal harness. These objects were listed in the delivery catalogue as having been transferred to Pitt Rivers from the South Kensington Museum in 1884, although it is not known how they were exhibited at either Bethnal Green or Pitt Rivers. Since then, the Museum has become home to a surprising diversity of material objects from the Philippines through both donation and acquisition. A number of the Philippine objects were transferred to Pitt Rivers from other museums, such as Ipswich Museum and the Royal Botanic Gardens at Kew, which once displayed an extensive economic botany collection [4]. Other items were purchased, notably from Stevens Auctions Rooms which dealt prolifically in ethnographic objects. However, only a handful of the approximately three hundred objects have ever gone on display.
Notable Contributors 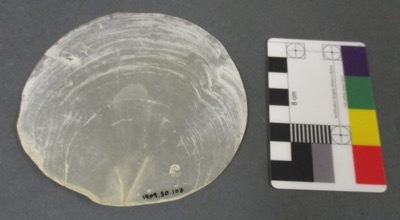 Pearl shells from Manila, collected by John Maclear in 1885.
A notable source of materials was the Challenger Expedition, the voyage of scientific discovery undertaken by the HMS Challenger (1872-1876) under the command of John Fiot Lee Pearse Maclear. It was from this expedition that items came into the collections of Henry Nottidge Moseley and Henry Balfour, both of whom were prominently involved in the creation of Pitt Rivers. Balfour was particularly prolific, having donated the second highest number of objects to the Museum next to Pitt Rivers himself [5], as well as authoring numerous scientific and ethnographic articles. Maclear himself also collected Philippine materials, though this was mainly during his surveying work on the HMS Flying Fish from 1883 to 1887. His contributions to the Museum’s Philippine collections mainly comprise pearl shell for windowpanes and pottery, which were donated by his wife Julia Maclear [6]. 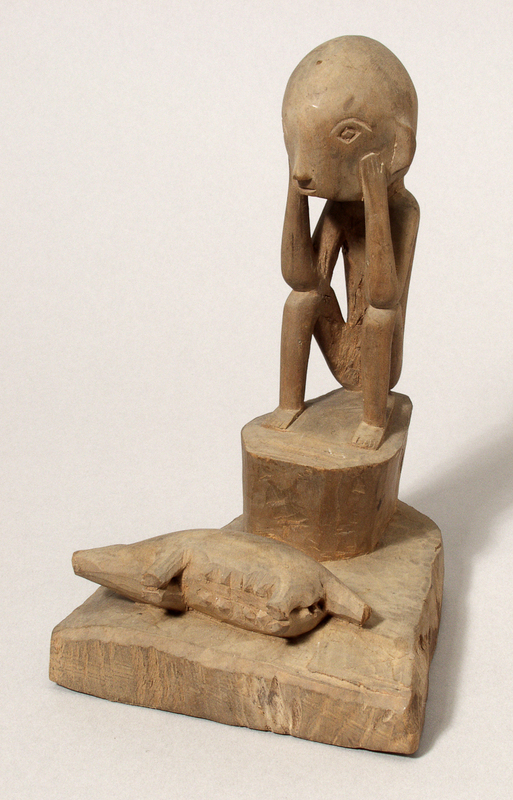 Carved wooden seated figure from Nueva Viscaya (Northern Luzon) donated by Mrs Turnbull in 1913.
In 1913 the collection featured donations from one Mrs Turnbull, an enigmatic figure who has seemingly also donated to other institutions including the British Museum and the Horniman Museum [7]. It is thought that the field collector – actually her son – was one William Arthur Wilfred (Wilfrid) Turnbull, an American lieutenant in the Philippine Constabulary in the first decade of the 1900s, and who spent time among the Ilongot people especially from 1909-1910, during the William Jones affair. [8] He died in 1944 [9], possibly from myocarditis while interned in a Japanese camp. [10] The Turnbull donations include wooden spoons, bowls, wooden figures, musical instruments, ornaments, and many more. 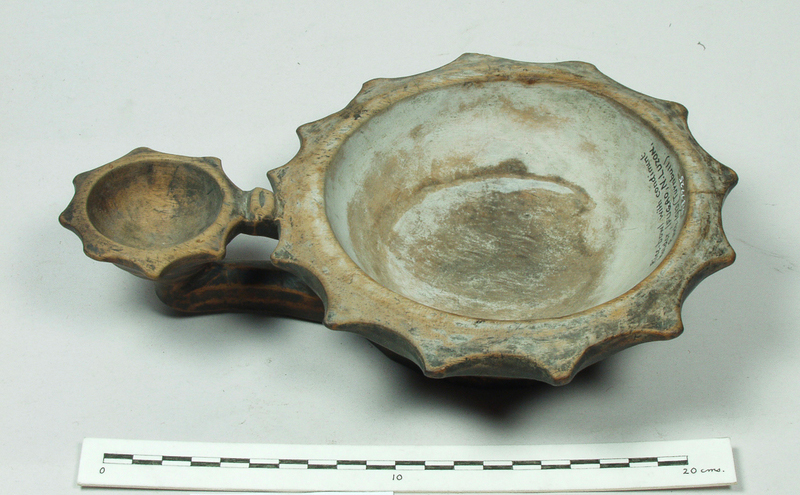 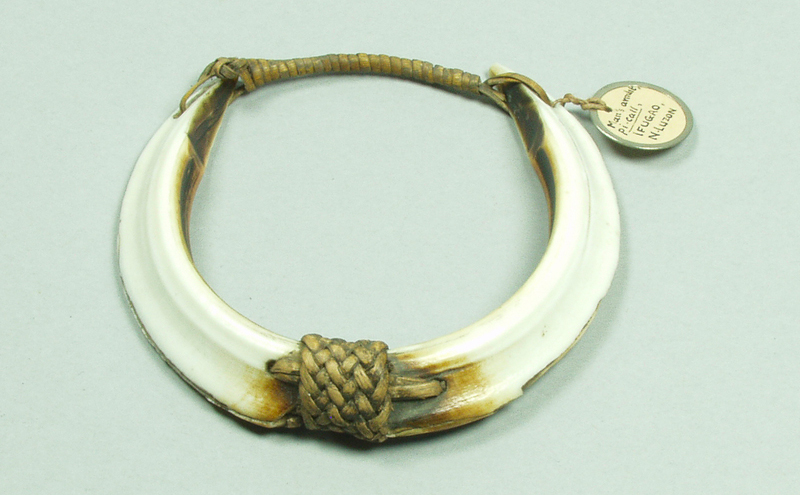 Boar tusk arm ornament from Nueva Viscaya (Northern Luzon) donated by Mrs Turnbull in 1913.
Photographic Collection
A particularly interesting aspect of the Philippine collection is the sizable number of photographs of various subjects.**The collection features the works of renowned photographers such as George Dixon Aked, the British artist and photographer [11] who also photographed parts of Southeast Asia (including Laos, Cambodia, Thailand, Indonesia, and the Philippines) in the 1930s [12]; Lady Vera Broughton, one of the earliest female ethnographic photographers [13] whose oeuvre in Southeast Asia (including the Philippines) and the Pacific Islands was subsequently used to illustrate the book Walkabout by Lord Walter Guiness Moyne [14]; and Carl Dammann, the ethnographic photographer behind the famous 1875 publication, the Ethnological Photographic Gallery of the Various Races of Mankind [15], and whose work likely entered the hands of Pitt Rivers after it bought the remains of his work from the Frederick Dammann estate in 1901, which included many loose prints and copy negatives. 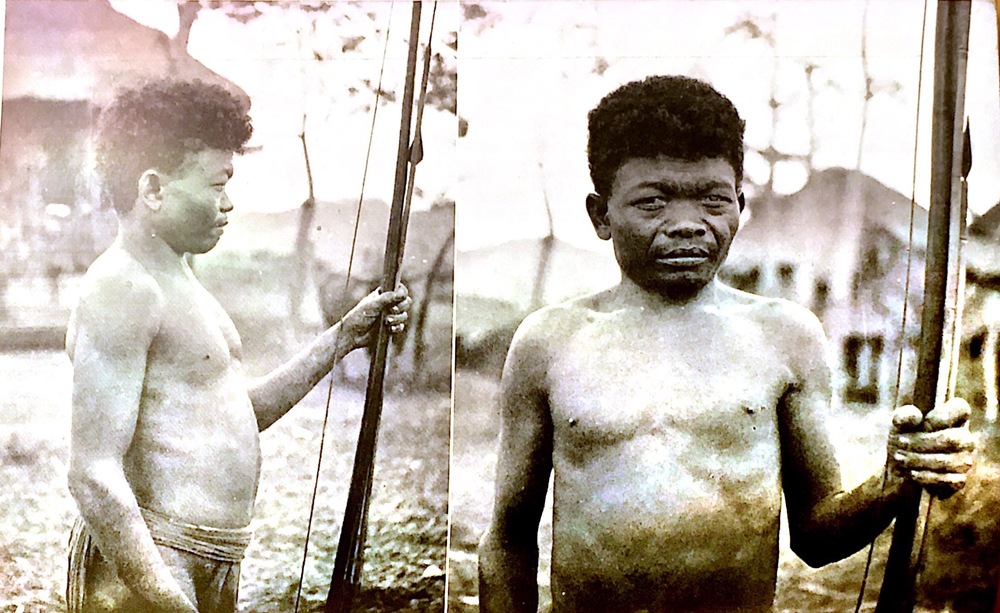 We include this photo of an Aeta man for reference and possible recognition by his descendants. Here, he is not named and is posing for one of Vera Broughton’s ethnographic photographs that was published in Walkabout. The book refers to the Aeta as “pygmies”. (Broughton, V. 1936. PLATE 61: Aeta Pygmies, Luzon, Philippines. [photograph] London and Toronto: W. Heinemann Ltd.)
Highlights from the Philippine Collection

Pat-ik (tapping stick) used in body art from Northern Luzon.
Only a handful of items from the Philippine collection have ever been exhibited. Their latest prominent feature was as part of Pitt Rivers’ What’s Upstairs (2004-2006) cataloguing project [16], which indexed and researched objects displayed in the Upper Gallery of the Museum, a great deal of which were armour and weapons. These included an assortment of Filipino objects including spoons and items made from shell [17].
A selection of tattoo-making objects – including gisi, pat-ik, and bao, [18] were acquired from anthropologist Analyn Salvador-Amores. Tattooing, or body art, was the subject of Salvador-Amores 2011 documentary Kakau and Batok Talk: Tattoos from Hawaii and the Philippines [19], which was featured on Pitt Rivers’ Body Arts microsite. Her article Batok (Traditional Tattoos) in Diaspora: The Reinvention of a Globally Mediated Kalinga Identity was also published in the journal South East Asia Research by the School of Oriental and African Studies (SOAS). [20]
Moving on
The last items to enter the Philippine collection did so in 2018. A broad view of the Philippine collection shows a wide variety of objects despite the collection’s small size, suggesting a broad impulse to collecting rather than a specific or methodological focus. At least half of the collection has yet to be photographed. With the exception of the Kalinga body art feature, the Philippine objects have likely been displayed (when they have been displayed) alongside objects of similar type from other cultures to facilitate productive comparison [21] – in line with Pitt Rivers’ philosophy of a “democracy of things”. What the items express about the various Philippine cultures themselves is therefore a field of great potential.


*Samantha is a BA Global Liberal Arts student at SOAS, University of London. Through the SOAS Co-creator student internship, she worked on adding the data for  the Philippine Collection at the Pitt Rivers to the Mapping Project.

** Although this Mapping Project does not include photogrpahic collections in its baseline inventory, we include some particular photos from the Pitt Rivers for reference.

Browse 179 Items in this collection.