Philippine items in the collections of the Horniman Museum

The Horniman Museum in London, founded in the last years of the 19th century, contains a small but significant collection of material from the Philippines, assembled over more than a century from a variety of sources. Since the Museum was founded, the collections have developed through purchases from auction houses and dealers, through donation and bequests from travellers and ex-patriates, and through collection in the field by anthropologists and other scholars.

For much of the Museum’s existence, during which exhibitions were initially changed very rarely, objects were integrated into displays which addressed broad themes, reflecting anthropological theories of the day. Rarely were objects used to express ideas about the originating culture itself. In more recent years attitudes to and interest in overseas cultures have developed, along with increasing opportunities to make connections. 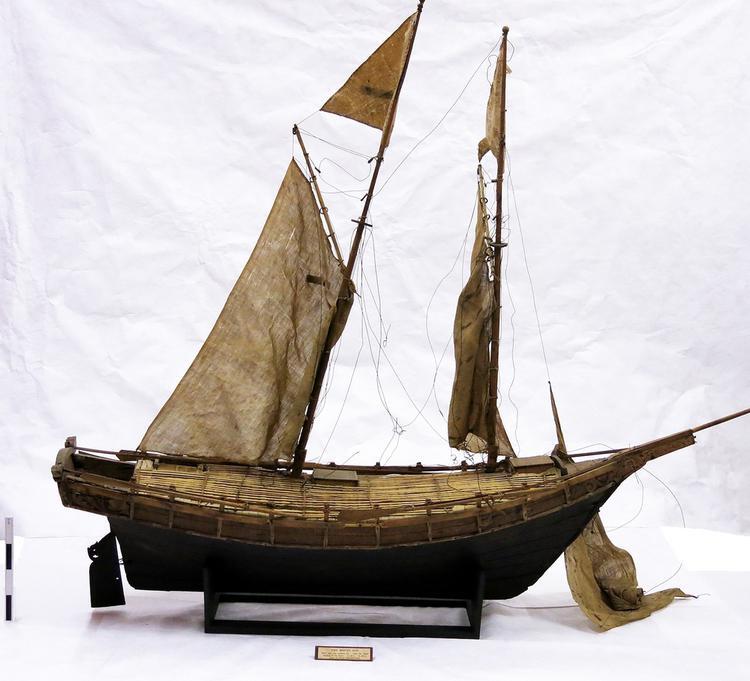 
The first register of items in the Museum was made in 1898. It lists several models of boats from the Sulu archipelago, the first mention of items from the area of the Philippines. These would have been displayed with boat models from other parts of the world, where boat technologies could be compared. It is likely that they came from the Indian and Colonial Exhibition of 1886, in which such material appeared. The Museum’s founder, Frederick Horniman, donated the Museum to the people of London in 1901. Under the guidance of Alfred Cort Haddon, the Museum began to focus on anthropological material, though the Philippines were barely represented. The 1910 handbook included a photograph showing a comparative image of various methods of making fire around the world.

Depicted at the top is a fire saw from the Philippines, which is not mentioned in the Museum’s register, but which has been discovered on the shelves. The first item listed in the accessions register as coming from the Philippines, apart from the model boats which were almost certainly made elsewhere, is a basket acquired in 1909 from the dealer William Ockleford Oldman. This would have been placed immediately on display in the cases illustrating ‘the stages in the evolution of the domestic arts’, which included displays of basketry, pottery, spinning and weaving and so on, ranging from very simple structures to more complex ones. Again these displays would have juxtaposed material from all over the world.

The following year, 1910, Alfred Haddon himself donated a pipe from the Philippines, together with ‘three specimens illustrating the cire perdue, or lost wax, process’. This donation was Illustrative of the Museum’s focus on techniques and materials. The pipe was classified as ‘Igorrote, of the Philippines’. Two years after this donation, the Museum purchased an ‘Igorrote’ axe, though this has not yet been identified in the collections. These acquisitions were followed by the purchase of two carrying baskets from a Mrs Turnbull. Sadly, we have not yet been able to identify what her connection was with the Philippines. The baskets may have been displayed in the section on ‘land transport’, since objects were partly classified by function, and these would have been used for carrying heavy loads. Mrs Turnbull also donated a beautiful Bontoc blanket, and a rice container. After Mrs Turnbull’s donation in 1914 no more material from the Philippines was added to the collection for nearly 40 years.

The first Philippine material to be acquired after 1914 came in 1950, when the widow of William Ockleford Oldman donated items left unsold from his collections. Although he never travelled to the Pacific Oldman’s substantial personal collection focussed on Oceania. The Philippine material all relates to peoples whose material culture was relatively unaffected by western influence. It includes, for example, a set of Bagobo costume consisting of a headcloth, trousers and a jacket. Interest in Bagobo clothing was probably enhanced by the western fascination with headhunting cultures. Mrs Oldman’s donation also included five shields, again relating to warfare and a way of life seen as very different from that of Europe. One is catalogued as Bagobo, the others from Cagayan island and Igorot. There are other items, including a backstrap loom. Not everything in the collections has been photographed yet. Collecting has continued since 1950, the types of material collected changing as attitudes changed, and there has been increasing engagement with source communities both in collecting and in interpretation and exhibition of items in the Museum’s collections.


Dr Fiona Kerlogue is a Research Associate at the Centre of Southeast Asian Studies at SOAS. She was for many years Deputy Keeper of Anthropology at the Horniman Museum in London and has published widely on the material culture of Southeast Asia.

For a lecture given on the Philippine Collection at the Horniman, given at the SOAS 2018 Philippine Cordillera Conference, follow this link.

Browse 212 Items in this collection.