The following notes are drawn from research compiled by Andy Mills as part of the DCF Cutting Edge project in 2006-2007. This metallic armour has quite a different cultural ancestry from the everyday armour of the Moro of Mindanao island which is much the same as that form Borneo and the Naga Hills (conical caps and barkcloth or leather jackets). This armour bears much similarity to the Islamic mail-and-plates armour around it, and it has its antecedents in armour imported by Muslims, who have been doing business, and conducting missionary work, in the Philippines since the 10th century AD. Usually, Moro armours of this kind are of brass mail and brass plates (as here), or brass mail and plates of the horn of the Carabao – a Filipino subspecies of the Water Buffalo (Bubalus bubalus). The armour opens shirt-like down the front, as with most Islamic armours, but has the added beautification of particularly ornate swivelling hook-and-eye clasps. The scrollwork on these clasps reflects some influence of Indonesian or Bornean origin. This armour was collected in 1893, in Sabah (North Borneo), and reflects a close relationship between the southern Philippines and northern Borneo – facilitated by the voyaging corridor along the islands of Basilan, Sulu and Tawi-Tawi. [SM 07/05/2008]. Field Collector: R. Hugh Chapman When Collected: 1893 Other Owners: R. Hugh Chapman Mabel How PRM Source: Mabel How Acquired: Donated August 19

Donated by: Mabel How 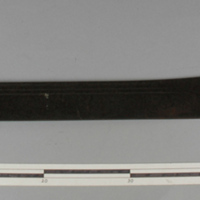 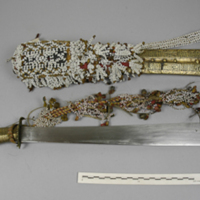 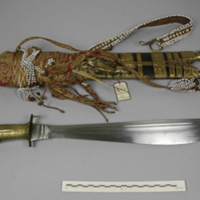