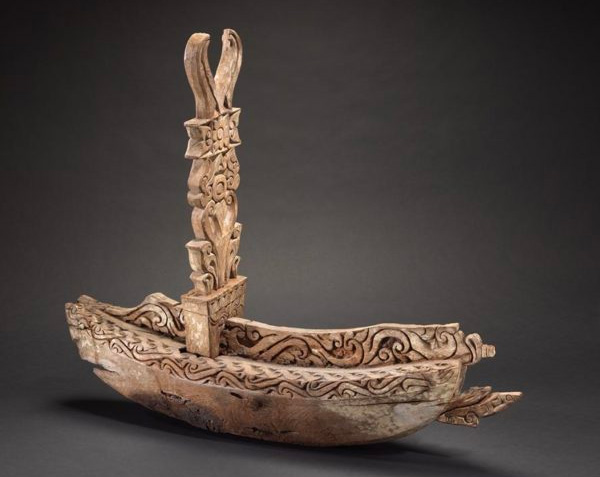 It is possible, from one point of view, for one kind of burial ground to be the most beautiful on earth. That one perspective detects and keens to delicacy, and to the nearly imperceptible breezes lifting leaves and sand.

Wind, swells, and sand compose the grave sites of the Sama or Sama-Bajau — particularly the often-denigrated Sama Dilaut—on the shores of small islands, indeed islets, outlining (Indonesian) Kalimantan and (Malaysian) Sarawak, and speckling the seas from Borneo through the Philippines’ Tawi Tawi and Sulu Archipelagos up to the tip of the Zamboanga Peninsula. 1

Their grave markers, sundúk, surmount sand and coral mounds the scale of one human interred in the soil beneath. Anthropologists write similarly about these riveting, always-gendered emblems of the Sama departed. 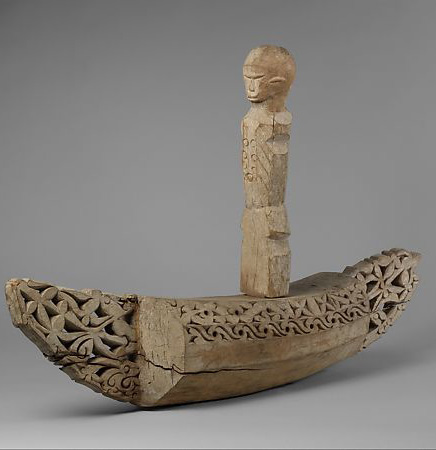 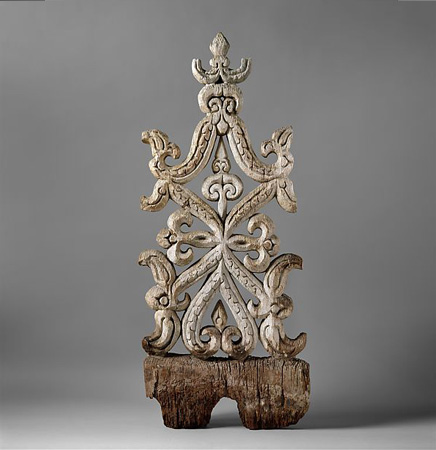 Woman's Grave Marker. Late 19th–early 20th century. Wood. 118.1 × 49.5 × 8.3 cm. Metropolitan Museum of Art
A phallic upright, often with a slightly pointed tip, is held erect from a boat-shaped base, to mark the tomb of a male deceased. The female departed lie beneath markers with rounded silhouettes, typically with floriate versions of ukkil.

The uprights and their boats rest on rectangular frames thought to be a kuból — a word familiar to the rest of the Philippines as, slightly variously: shed, hut, shelter, emplacement, lean-to, awning, place of presentation. Sometimes, kuból is the entire assemblage, including a white cloth canopy during actual ceremonies and left behind.

Ukkil in the languages Sama and Tausug (okir to the Mranaw, who do not have seaside burials, and ukit to the Tagalog and Cebuano, who mean “to incise”, “to etch into”) typically refines both the boat base and the upright.

This curvilinear iconography is an aesthetic response to the arrival of Islam in the 13th century in this string of islands and central Mindanao; but also to fragments of Hindu symbology, apparently dispersed thinly through an archipelago too north of the zone of impact of Indianization. 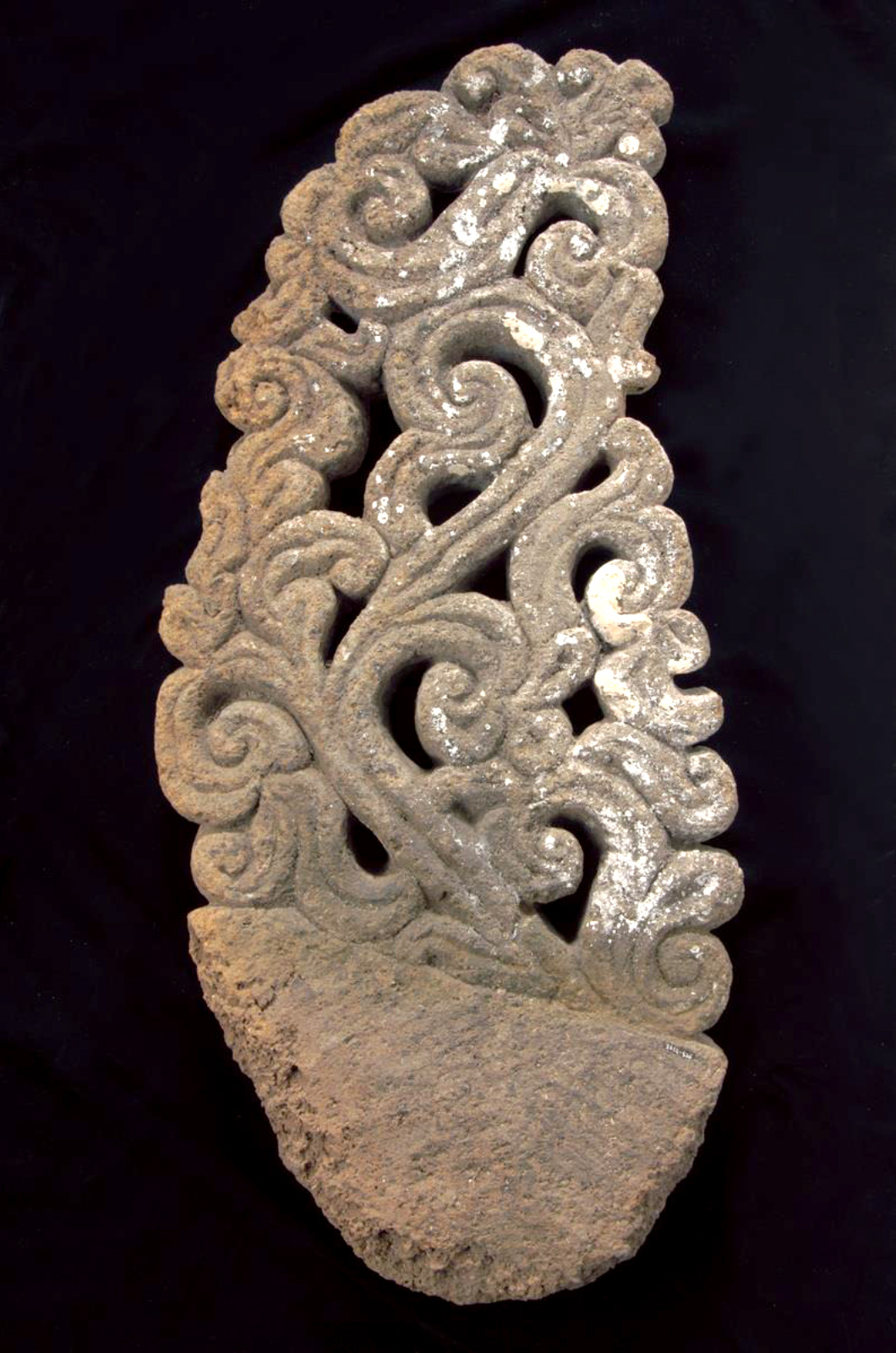 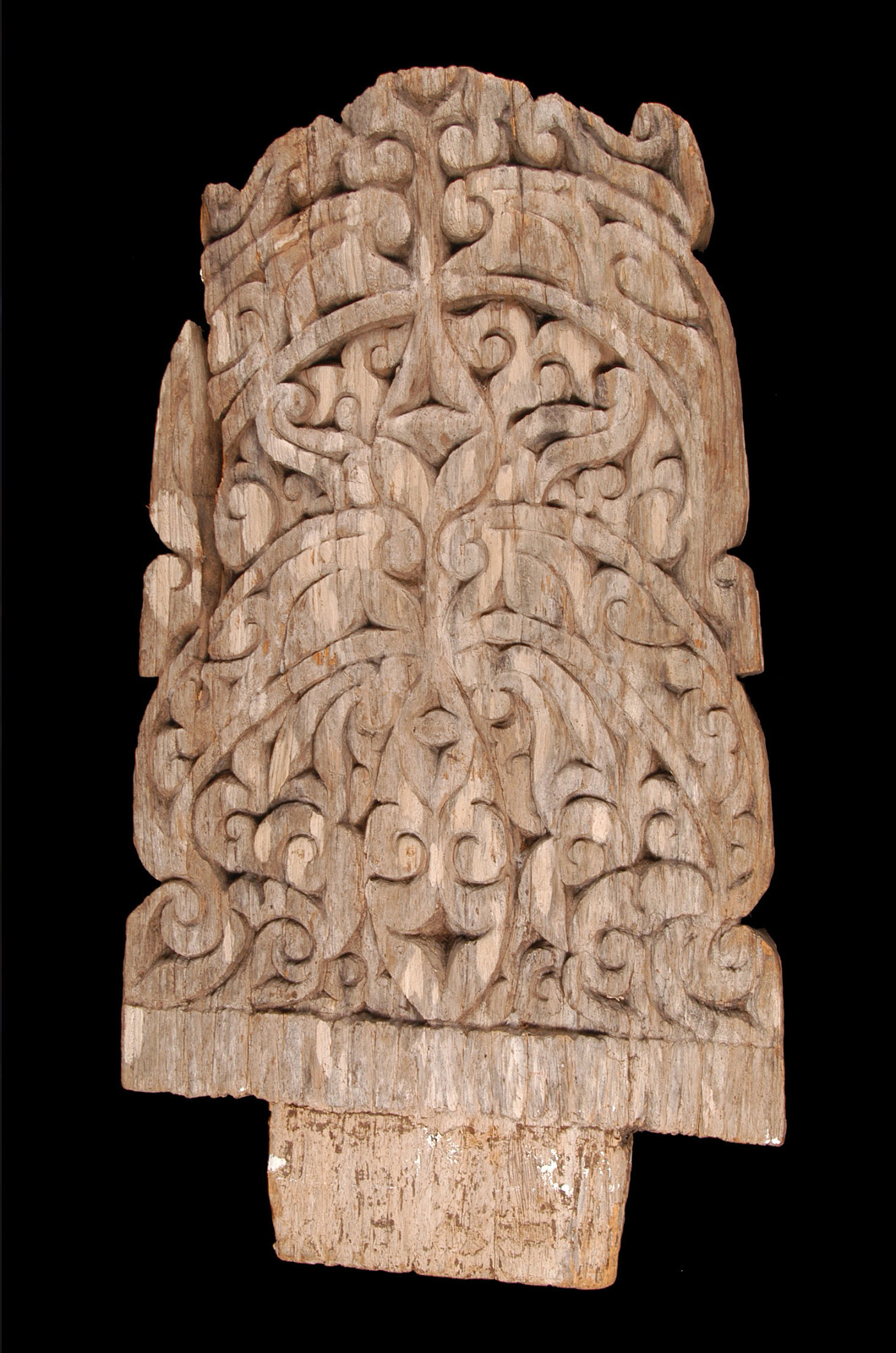 Funerary sculpture. 20th century. Wood. 73 x 40 x 6 cm, 7535 g. The Quai Branly Museum
In any case, Hindu concepts and Islam, the first monotheistic religion to be accepted by locals —who have been living for thousands of years in the archipelago that eventually became the Philippines — were absorbed into and reshaped by an ancient and likely archaic spirituality.

As in the case of the next Abrahamic religion that came around, the Austronesian ancients worked the foreign into local knowledge. The sculptural intonation of male and female energies belongs to the enduring animism of the Philippines and Indonesia, notwithstanding the overt embrace of monotheism.

The Sama grave markers and their burial sites are like the Sama themselves: their bodies are immersed in the waters of littoral zones and open seas. One of the Sama groups — the Sama Dilaut (specifically the Badjao to many) — live entire lives at sea. Their remains are also bathed by the brine that seep beneath the mini-dune burials. 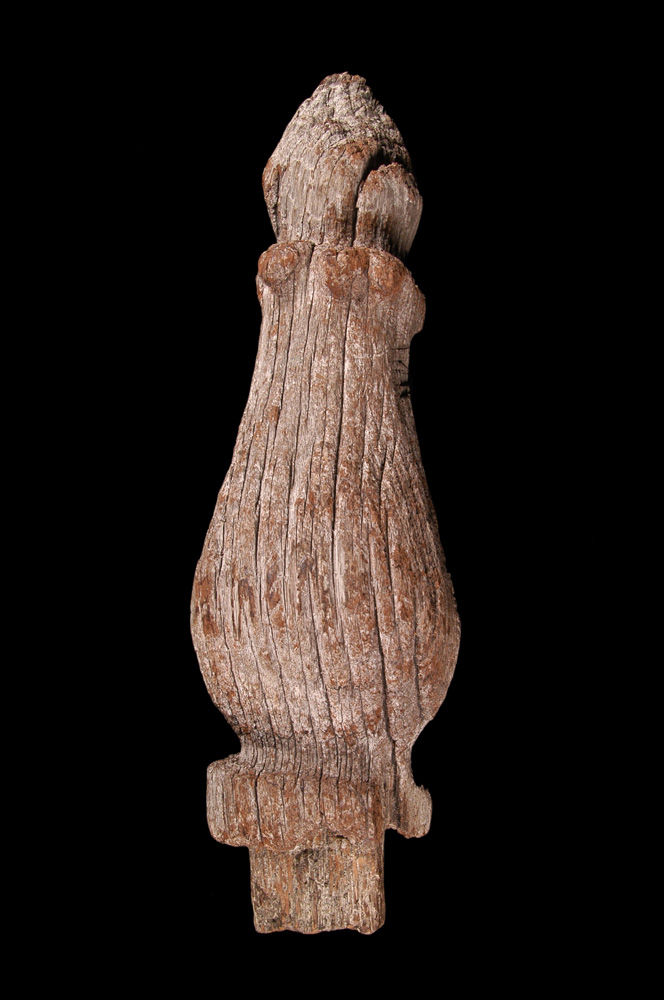 Funerary stele. 20th century. Dense wood washed away by bad weather. 58.2 x 18 x 17.4 cm, 6554 g. The Quai Branly Museum
The grave markers are in truth only one aspect of their mortuary aesthetic.

The gentle convexity of the mounds are variously patterned, daily, by leaves departing the mangrove and ficus umbrellas of coral atolls. The dryness of the leaves has a crispness at variance with the glassiness of wet, crushed coral.
The aspects change through the day. The graves are an education in discernment. Of subtle, fugitive detail.

And a few details literally fly and elude capture in single meanings: birds keep aerial watch over the departed, who may very well take flight over the sea as well. This orientation to water, stars, and bird life — this culture that includes heartbreaking songs sung from boat to boat 2— glides through seascape instead of ambitioning to alter its contours.

Perched on outriggers or haunched over the smoke of a boat-borne hearth, the Sama Dilaut sing love songs, silly songs, grave songs, songs of good will and of reconciliation, songs for babies born at sea. In other words the full range of human experience floats as melodies perched on waves.

Their lives are among the roughest on the planet, impossible to romanticise. Their songs, like their graves, are delicately articulated. That delicacy with which a tough life is lived: exactly the qualities of Sama burials.

The Water Homeland of the Sama-speaking People

Their maritime range is breathtaking: the entire Coral Triangle from Timor Oeste to Sulawesi to Borneo, and well into Central Philippines. In fact, a Samalan language—Inabaknun—is spoken on Capul Island off Samar in the Visayas, by long-ago Christianized communities who are unaware of their close linguistic kinship with the Islamicized peoples of the Sulu-Tawi Tawi chain. Except for the land-oriented Sama — the Yakan of Basilan Island and the Abaknun speakers of Capul Island — the sea is verily the earth. The boat-shaped mortuary form conveys their souls, through an ethereal water world, to eternal rest. Perhaps eternal navigation. And in fact the markers have traveled on their own. 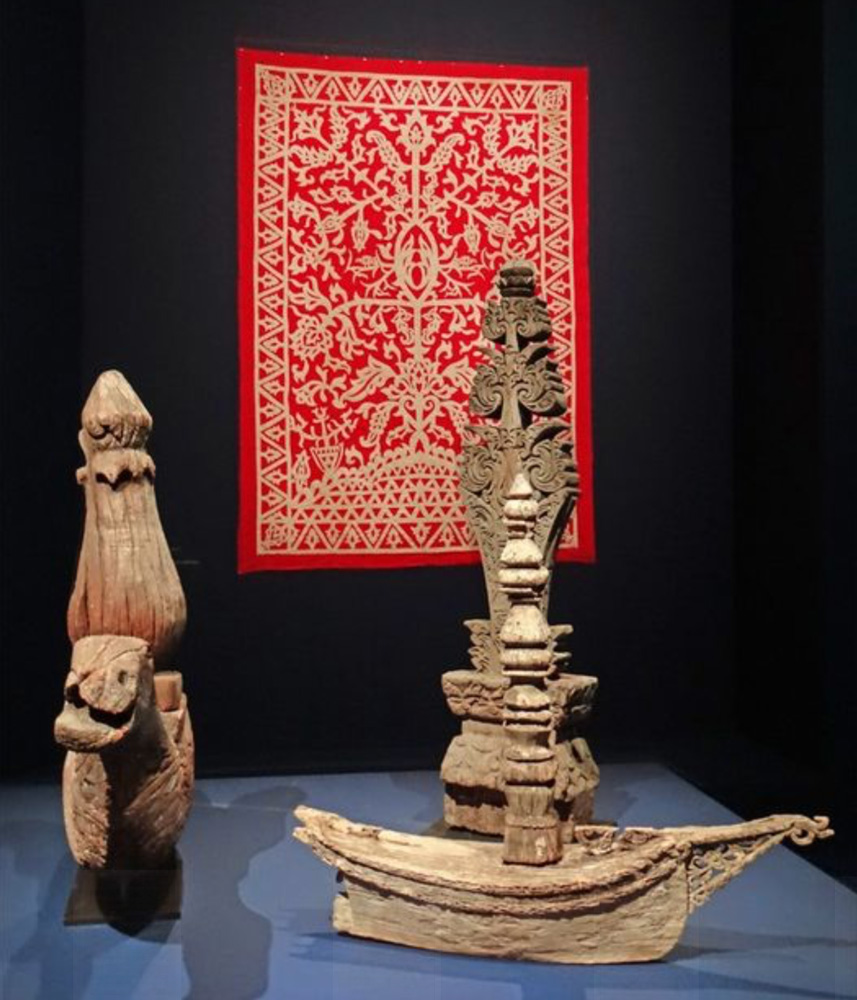 Tomb marker (Sunduk) Sulu archipelago, Tawi-Tawi islands Sama dilaut population Wood 19th century Quai Branly museum (former collection of the Barbier-Mueller museum, Geneva) Objects presented in the exhibition: "Philippines, archipelago of exchanges" from Tuesday, April 9 to Sunday, July 14, 2013 at the Quai Branly Museum
In just one island that may be too small to be called the Great Sta. Cruz, just off Zamboanga City, the sand is pink, the red coral is ground by the sea into brittle bits, the sand is white, and the quiet is textured by barely audible marine and air currents. About 30 years ago, the boat grave markers were a fleet.

Whether kuból or boat, the grave assembly were as though momentary moorage from travel that is eternally poised to continue.

Today, Greater Sta. Cruz Island is bereft of the elaborate markers, although presumably the remains of the departed have stayed underneath the still visible mounds. The island of pink sand is too near Zamboanga City to have escaped the antiquities trade, which, since the war of the 1970’s that did not quite abate until the last half decade, has had an aggressive run on Mindanao and the Cordilleras.

In contrast, the island of Simunul in Tawi Tawi, close to Semporna, Sabah, eluded the antiquities scouts, and have retained a good number of its grave markers —many made of coral.

Elsewhere in Mindanao in the last half century, gongs, textiles and clothing, relief carvings, brassware of inlaid silver and gold, and house parts vanished and turned up in global capitals. Why there exist collectors of grave markers (and indeed burial urns), on top of the entire range of prizes, is something of a repulsive affair. But this trade would have it thus: the boat-shaped funerary sculpture are now at sea, as it were. 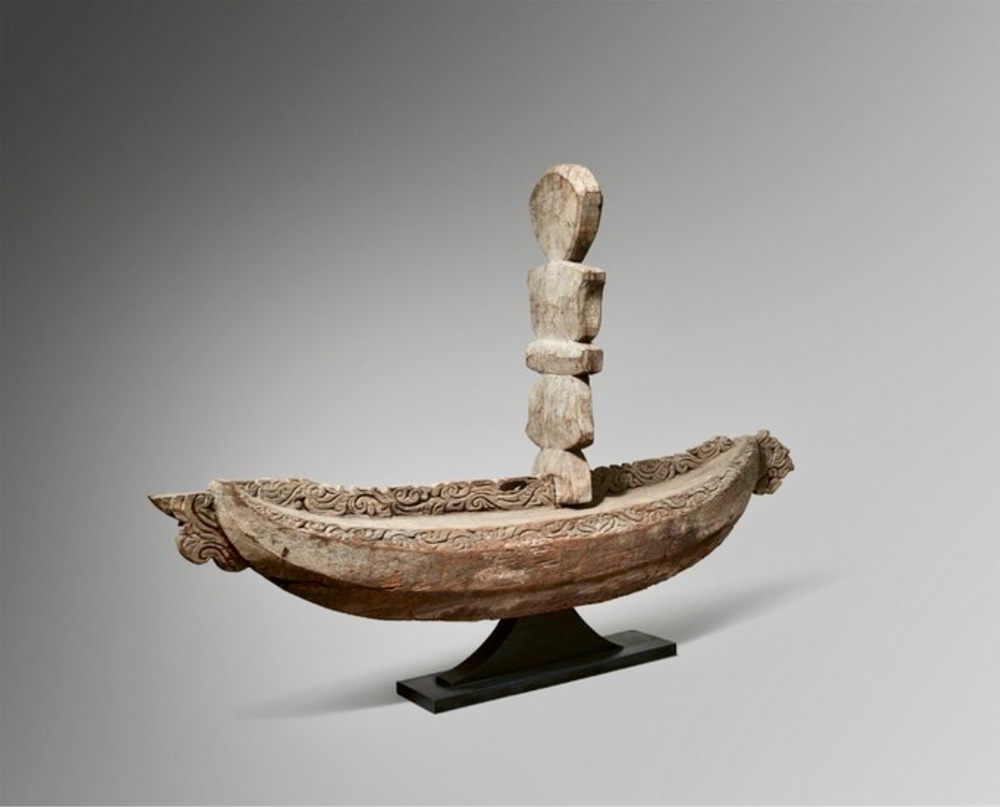 Sold in the international art and antiquities market

Sold in the international art and antiquities market

Art and prayers for a new burial

The Sama Dilaut grave markers at the Metropolitan Museum of Art (New York City), the Fowler Museum of UCLA (Los Angeles), the Musee du quay Branly – Jacques Chirac (Paris), and other museums and private collections, traveled to a kind of ether, vastly different from the cosmologies these were meant to transit.

These are parallel universes: the Sulu Seas and the art and antiquities world and its imperatives and responsibilities. But objects are exited from the one to the other—from universes comprehended and communicated orally, to others shaped by writing, is one way to put it— as these are metamorphosed into the textually-driven and awesome thing called art.

In museum catalogues and exhibitions, the grave markers are denoted as ‘funerary sculpture’ and thus remade (or, to use a courser term, repurposed) into art. Their beauty is given over to the admiration of aesthetes who find the diffusion of the Middle Eastern arabesque a confirmation of civilisational discourses; who enjoy the separation of the splendid form from the sandiness and corrosiveness of tropical islands.

That sand is also very far from Manila; not just Paris or Los Angeles. Likewise, it was the case, for instance, that corrosion was different from that which salt water produces, when three Sama grave markers were acquired by the Cultural Center of the Philippines in 1987. 3

The markers—purchased to be part of a volte face by an institution turning to tradition and region from the ambitions to globalize of its early decades as instrument of dictatorship — had a corroded context, like all (even legally) trafficked material.

Like, in fact, grave artifacts taken from archaeological sites by disturbing the ground, there is no restoration possible of any sense of the lives lived around the interment.

In any case, when these three sundúk and other articles were to be de-mounted from exhibit to storage, prayers were suggested as appropriate. An imam presided. It was understood that a dimension of these proceedings involved more than residual animism.

That similar prayers will be permanently part of Collections Management for the CCP do not do more than sound a hope that the savagery of art market-driven dislocation will be assuaged by thoughtful custodianship.

Still, the prayers could not but evoke the beachside burials. Quite unknown now, the beauty of these sites encompass the ephemeral; did not try to stay the waves and breezes. It is a beauty museums will do well to understand: as that which is impossible to acquire and present. 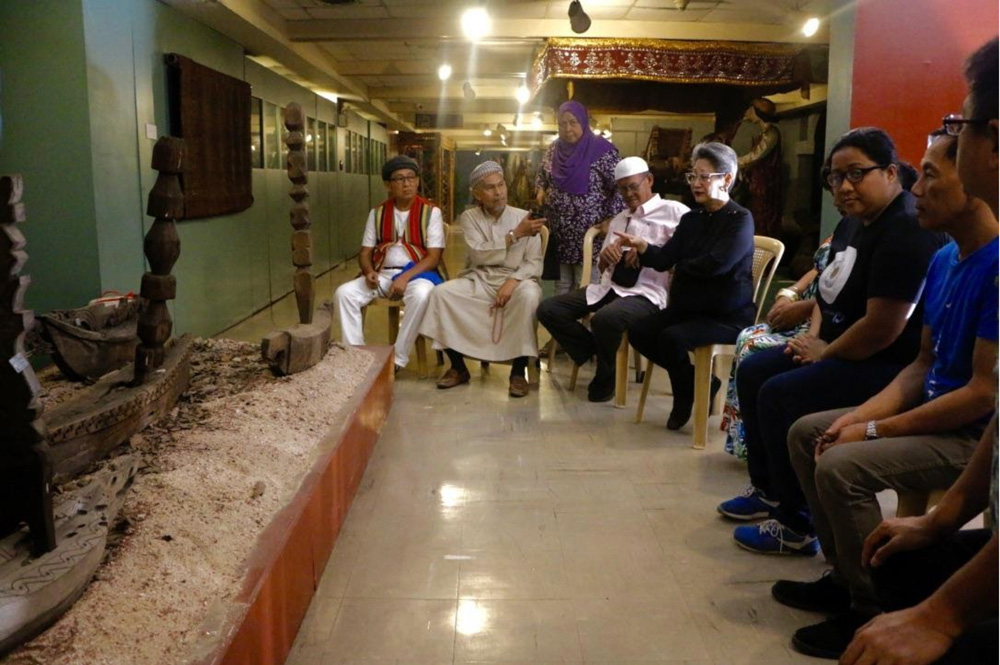 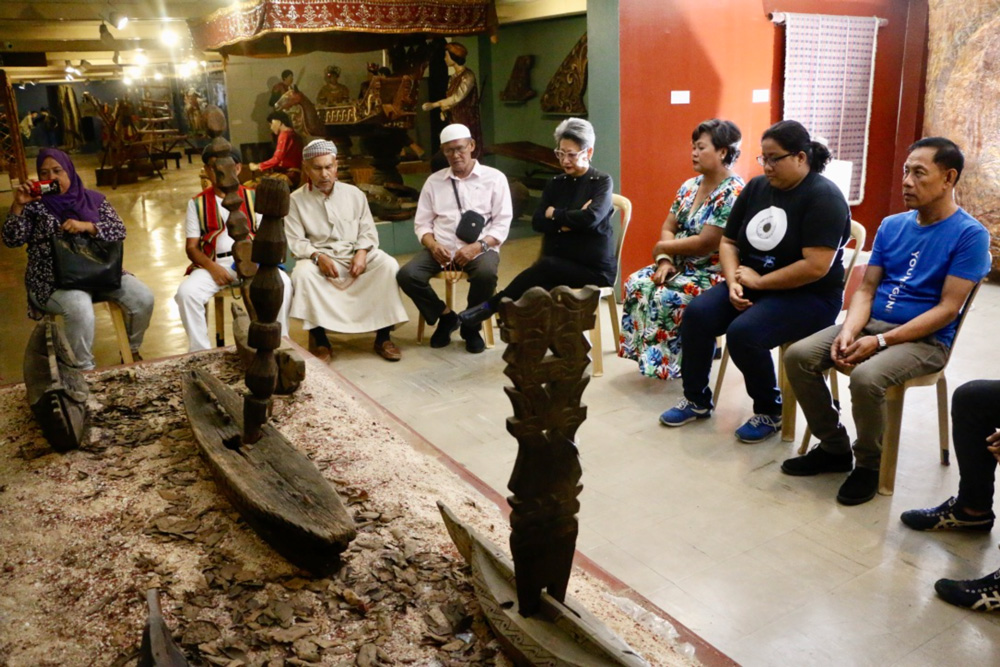 Prayers presided over by an imam, prior to the de-mounting of the exhibit on Sama-Dilaut grave markers in preparation for storage, September 12, 2019. The brief ritual marked the permanent closure of the Museo ng Kalinangang Pilipino, to be replaced by a new museum for the Cultural Center of the Philippines. The imam was invited by Mr. Ibno Hajar Turabin (extreme left) of Basilan, a Sama. Some of his forebears were buried on Sta. Cruz Island.

2. There exists a substantial body of literature about Sama song traditions. Read, among others, Nimmo, H. 1994. Songs of Salanda and other Stories of Sulu. University of Washington Press.

3. The author, Marian Pastor Roces, collected ethnographic material of reliable antiquity on behalf of the Cultural Center of the Philippines, which commissioned her to curate the establishment of the Museo ng Kalinangáng Pilipino in 1986 - 1987.

Lying along the ancient sea trade route between the southern Philippines and Borneo, the islands of the Sulu Archipelago have long been a crossroads of cultures and artistic traditions. Although the Bajau are Muslims, their art often reflects the…
3

Wooden stele carved with decorative motifs on both sides. Base wider than the top carrying a lower part in the form of a tenon having probably fitted into a wooden frame or having been placed in the ground. Wear traces of wear. One side is…
6

Islamic-influenced post that plugs into the horse's back. Usage:The male stelae are different from the female stelae in order to facilitate the entry of the deceased into the other world. "According to Thomas Kiefer and Clifford Sather, to reach the…