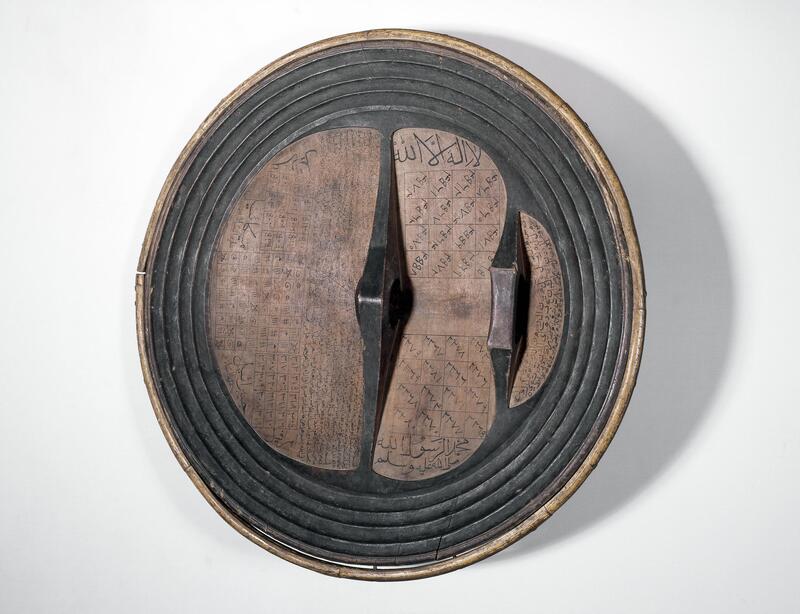 A shield and its inscriptions. .British Museum; Acquired: 19th c

This round, wooden shield — in the photograph, the inner face is shown, where the wielder's handle is affixed — has a form that appears in late nineteenth and early twentieth century photographs of Tausug, Iranun, Maranaw, and Maguindanao men.

As shown in those photographs, the front is an unmarked, low convexity with no finial at the highest point — exactly as is the front of this shield. However, this British Museum shield compels attention because of the inscriptions incised on the wood itself of the deep parts of the inner face, where the shield is near the owner's body.

The museum records only give the Philippines as provenance, hence its specific ethnolinguistic origin will remain uncertain. It is however definitely from a nineteenth century Muslim community in a part of Mindanao that may or may not have been part of the political entity las Islas Filipinas (but now is part of the Philippines).

The British Museum cataloguers of the late 19th century would for sure have accessioned it "Malaya" or "Indonesia" if acquired in either of these geographies that were clearly demarcated from the British Empire perspective.

The inscriptions are only preliminarily read. Comparing this specimen with several others in different European museums, it is clear that it is prayer. And supplications to the divine on a shield is a powerful trace of a kind of warrior-hood that was, as it were, shielded by an intensely spiritual order of things. Prayerful inscriptions on weapons and shields may be seen in many collections of Philippine material — especially those, like this specimen, that are more than a century old. This is one nearly 200 years old.

Like the swords of Muslim Filipinos, the blades of Panay, Bicol, Cebuano, Tagalog, and other Philippine communities have prayers incised into the metal and/or pommel. In all these communities, these prayers are understood as talismanic. And in the case of Kalinga shields, it may be argued that the tattoo-like patterning on the surface are in fact divinely protective.

Abdulhamid Alawi Jr, the Chief Administrative Officer of the Office of the Regional Governor Cotabato in the Autonomous Region in Muslim Mindanao in Cotabato City, read the inscriptions and shares his reading. 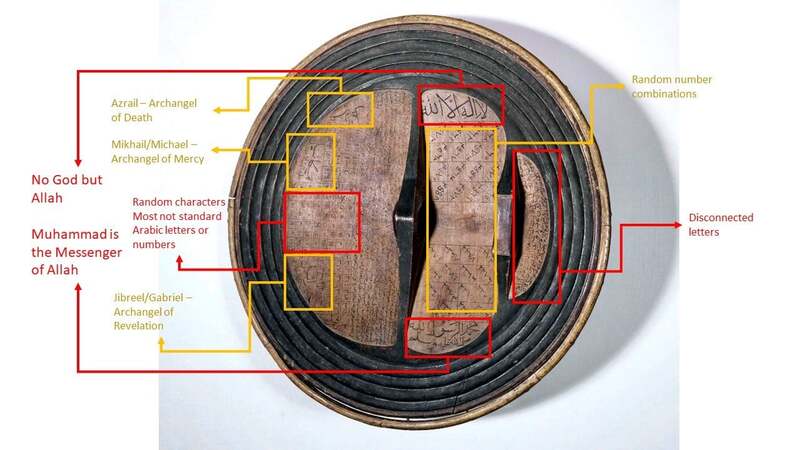 
In my initial posting of this object on a social media site, the deluge of comments and suggestions on how the intriguing texts could be interpreted kept on coming. Momo Miguel suggested that the numbers on the shield were most probably from the Gurmukhi system of writing, "particularly, ੯ is no. 9" After a series of exchanges, further annotations were made on the posted image: 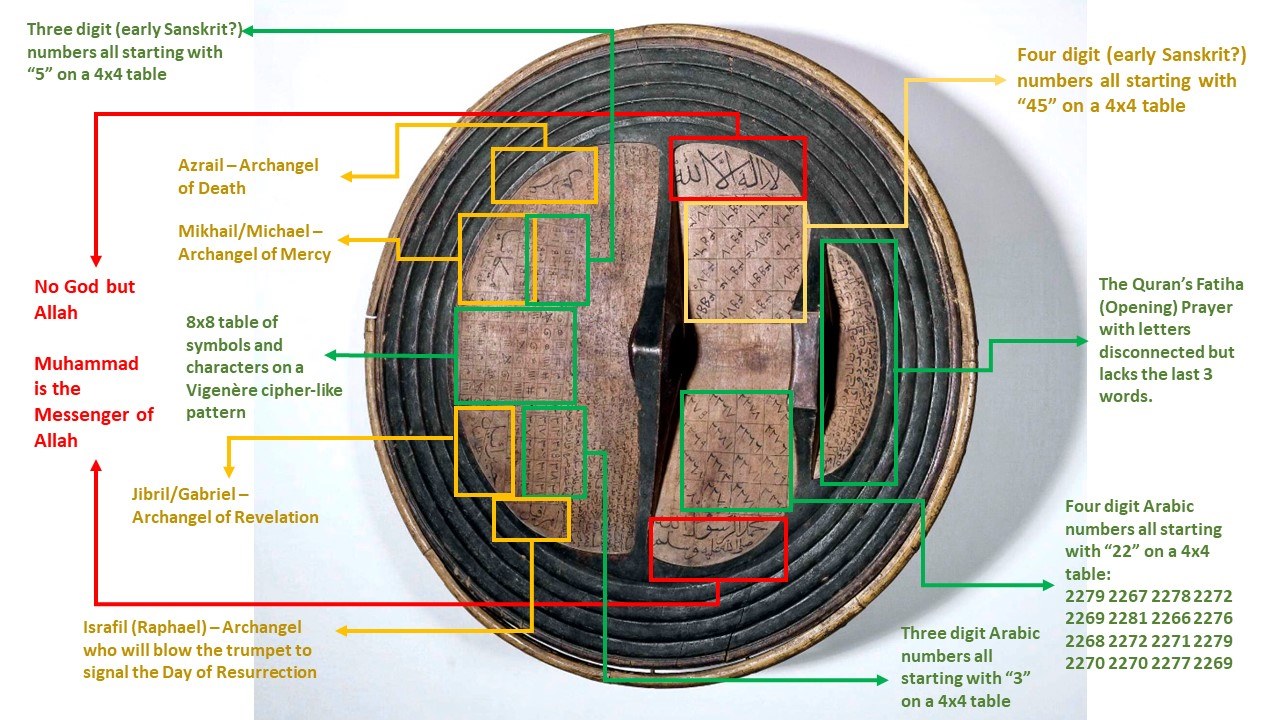 
Other suggestions came through Jason Muhammad Cristobal who conjectured that the text might be a "Taweez formula following a tradition practiced by a certain Sufi Tariqah (order)." He further suggests that the "intricate science of letters and numbers known as Hurufi in the Islamic tradition, that dwells much on the esoteric realities of the Holy Qu’ran and Hadiths," could be used to help interpret the text. He pointed to extant "codexes allegedly produced by the Tuan Awliya (Saintly figures) Guru Alim (Scholars) and Habaib (Hadrami Figures) from Lanao del Sur and del Norte that documents the whole science and tradition of the divination of letters and numbers known as the “Rimaran” that might help scholars of the humanities and arts gain information about the ancient and lost practice from the Muslim societies of Mindanao and Sulu." He suggests that the originator of the inscriptions made a "formula to make the item susceptible for “Tabbaruk” (Divine Blessings) through the phenomena of “Tawwasul” (Intercession)."

In the end, it is not completely clear what the inscriptions mean. Certain sections may be from another syllabary — could be Tausug or Maguindanao Jawi. What is clear is that these were most likely structures of divination from local traditions.

Shield (with Arabic inscription) made of wood.Click here for an analysis of the arabic text.
2

Knife (Barong) with sheath (Knives). Dhū al-fiqār, or the Sword of 'Alī, is the key element of the decoration and symbolism of this barong, a single-edged short sword from Jolo Island in the Sulu Archipelago of the southern Philippines. A…