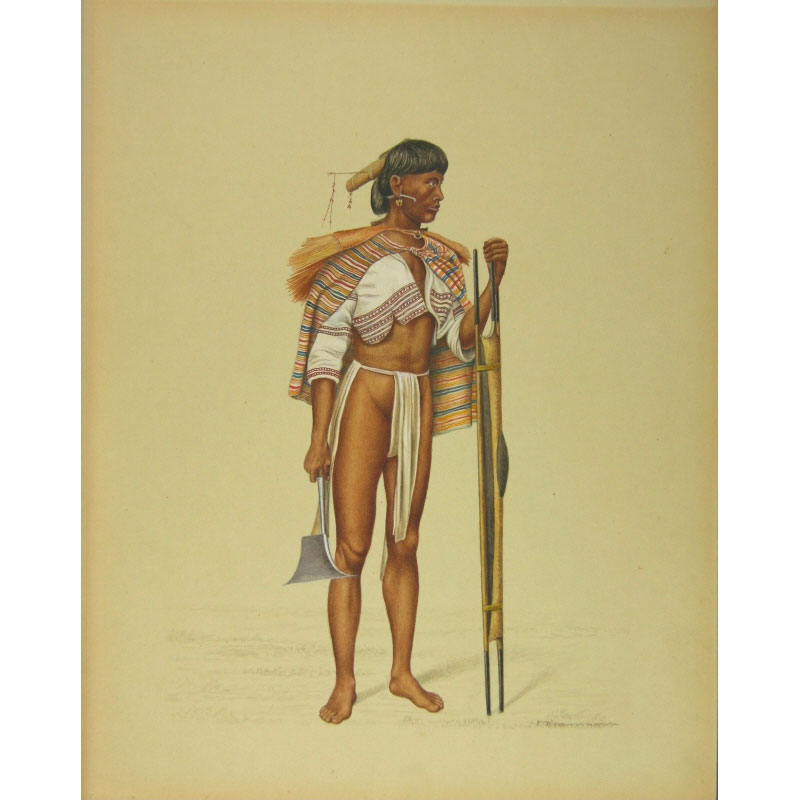 The watercolors were about people found or met in the place called las islas filipinas. But the image type called tipos del país is best understood to be Filipino from an outsider perspective. Recall that “Filipino” meant a person of Spanish descent born in the islands, an insulár. Until Filipino was repurposed to mean the citizen of the Republic proclaimed in 1898, the word was a racial and class category: someone of Spanish descent born in the colony to be become part of its cultural mélange. Filipinos floated above the native. This floating human who identified with the imperial center in Spain, joined other European and Asian (particularly Chinese) travelers, scientists, and consumers of exotic material, in their keenness to these make and acquire images of their other. 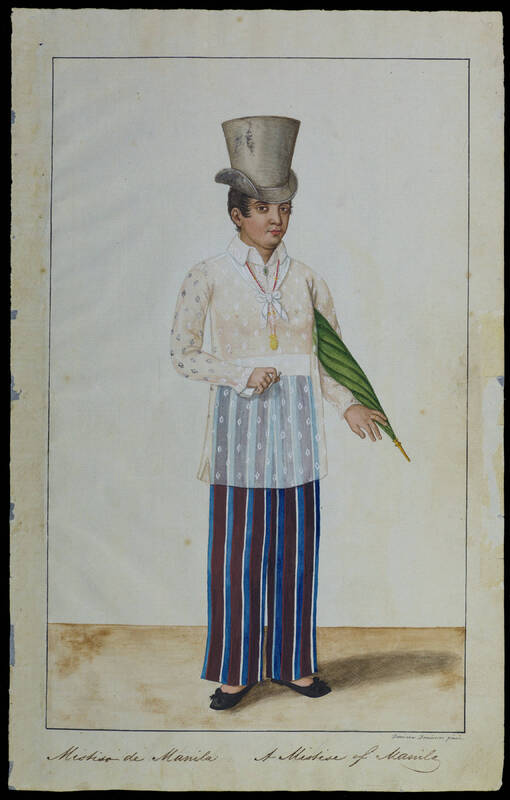 “Mistiso de Manila - A Mistiso of Manila “ (p 15 ) From an album of watercolour drawings by Damián Domingo. 1827/1838. Acquired 1911. Newberry Library
That Manila’s esteemed artist-teacher Damian Domingo (1796 to 1834), Chinese mestizo, applied himself to the tipos del país form in the first half of the 19th century is part of a geopolitical landscape larger than the colony. Domingo himself already belonged to cross-cultural streams. Cultural forms such as the tipos were popularized in the excitement in China and Europe about the modern speed of travel and the sheer breadth of what was suddenly possible to reach. Capital flow inevitably included trading and consuming images of the denizens of destinations already well known to imperial centers.

The tipos del país quickly charmed the objects of study as much as those who looked at them. By the time the term Filipino was incarnated as citizen—absorbing previous words such as native, indio, naturál, and variegated mestizos, all of whom henceforth thus differentiated from the transplanted, transient, or distant foreigner—the watercolors already represented an idealized, retroactive Filipino-ness. This ideal is the Filipino-as-classified by the eyes of the curious: by trade, race, class, region, place, and sometimes by certain art expressions. The classification was a visual operation, as those who looked took in the looked-upon, and set to paper the distinctive clothing, strangely enough always called “costume”; objects symbolic of work or stereotypical ethnic identity; and notations about place.

Heir to the worldview of the white or whitish Filipino, the 20th century Filipino would preserve the version of their collective self set by European classification. This was inevitable, because, in any case, the residents of the 400 year Spanish colony were recorded at birth as peninsular, insular (Filipino), mestizo sangley, mestizo español, indios naturáles (baptized natives), generic indios, and, outside the social order, infiéles (generally, the Muslim), remontados, and salvajes. The racialized hierarchy worked as legal categories, and as the basis of taxation for those beneath the apex of the pyramid.

This pyramid became the shape of Philippine culture and politics long after the tipos del país stopped being made. The images continued to circulate, in fact until the present, together with the terms which are somewhat like apples and oranges: Mestizo de luto or Cuadrillero (by José Honorato Lozano), La Yndia del Campo tiendera or Mercaderes Ilocanos indeed showing Ilocano cloth rolls (by Justiniano Asuncion), a lavandera here, a buyera there, sundry gobernadorcillos mixed with pescadores, and so forth. The racist structure is well hidden in the strike-anywhere curiosity of artists and buyers about these peoples classified by occupations, or relative savagery, or levels of nudity, or their affectations. Still, despite the differences carefully recorded by the artists, nearly all the images were painted as naifs, never with European academic massing; and the postures are of the 19th century European dandy.

To be sure, the Spanish punto de vista was only one of subtly different ways of taxonomizing the colonized, that is to say, as creatures who have to cohere somehow in an order. One set in this exhibit—in aquarelle but also described as “painted in pencil on cardboard” (mit Bleistiftvorzeichnung auf Karton gemalt) by one Ernst Krammann around the turn of the 20th century—should cue future scholars about a German perspective on the taxonomy of Spain’s salvajes for this period. Owned by Berlin’s Museum für Völkerkunde, the set belongs to the early period of this museum’s institutional history, in its association with the Berlin Anthropological Society (Berliner Anthropologische Gesellschaft), founded in 1869 by Adolf Bastian and Rudolf Virchow. The well-networked Philippine intellectual and subsequently secular martyr, José Rizal, and his friend the Prague-born scholar Ferdinand Blumentritt, fraternized with this society.

Blumentritt was to consolidate proto-ethnographic work done in various European imperia before and during his lifetime, to publish “Ethnography of the Philippines” in 1882. Blumentritt's ethnographic compendium and map were certainly available to German scientific circles. It is unsurprising that the Krammann set, confined to Philippine peoples still called salvajes at the turn of the 20th century, should echo classificatory words from the published German texts. And it is noteworthy that, unlike the Spanish tipos del país of the previous centuries, the Berlin set does not include the “Tagal”, “Bisayos”, and similar tipos wearing the full-dress assemblages and additional accoutrements of Philippine peoples who have clearly decided to identify with the visual appearance, work, and classifications of their colonizer from southern Europe. The Spanish and French tipos (this latter, fewer in number, but notable especially in the watercolors of the book of the medical doctor and explorer Jean Mallat in 1846) (2) saw Philippine inhabitants as broadly available to typologizing. 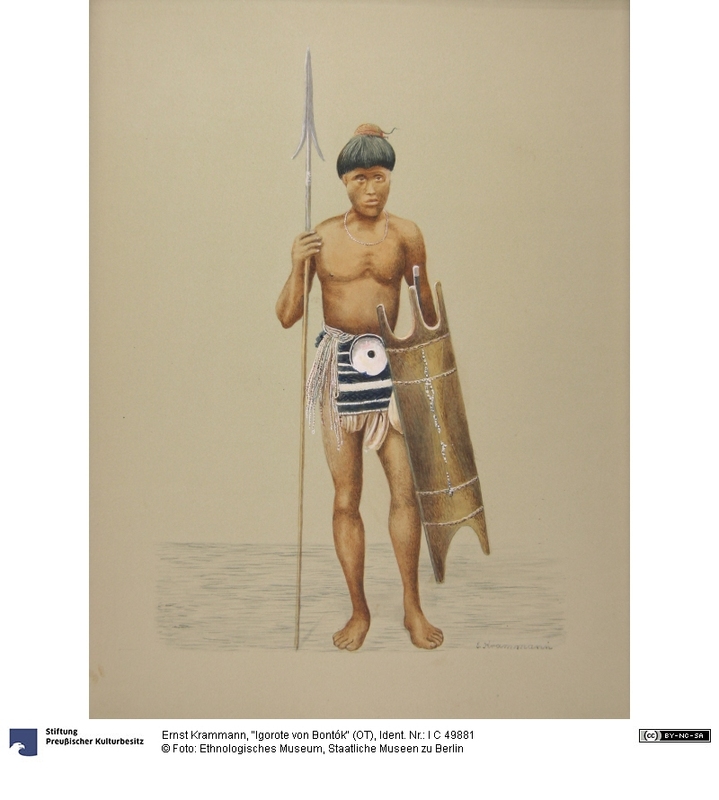 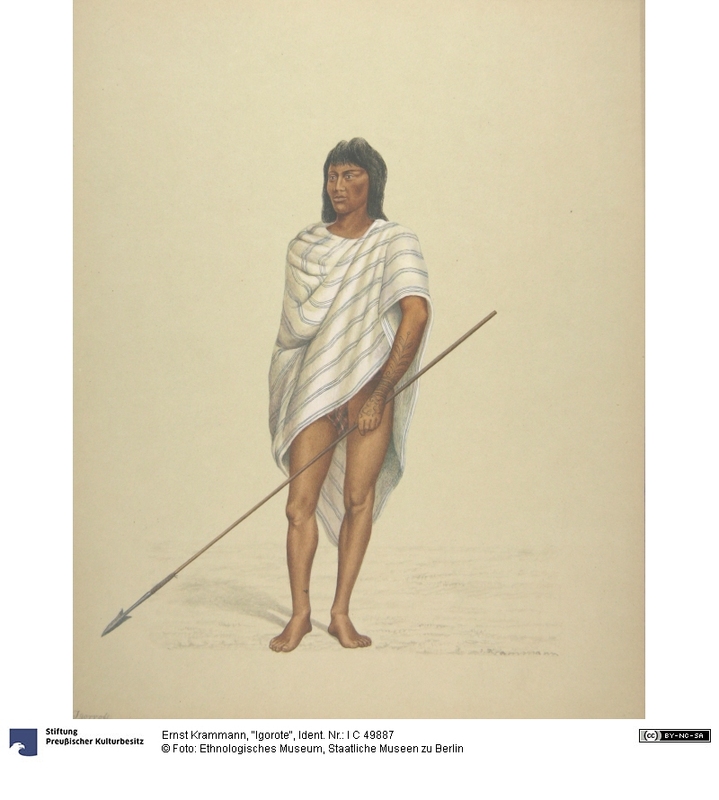 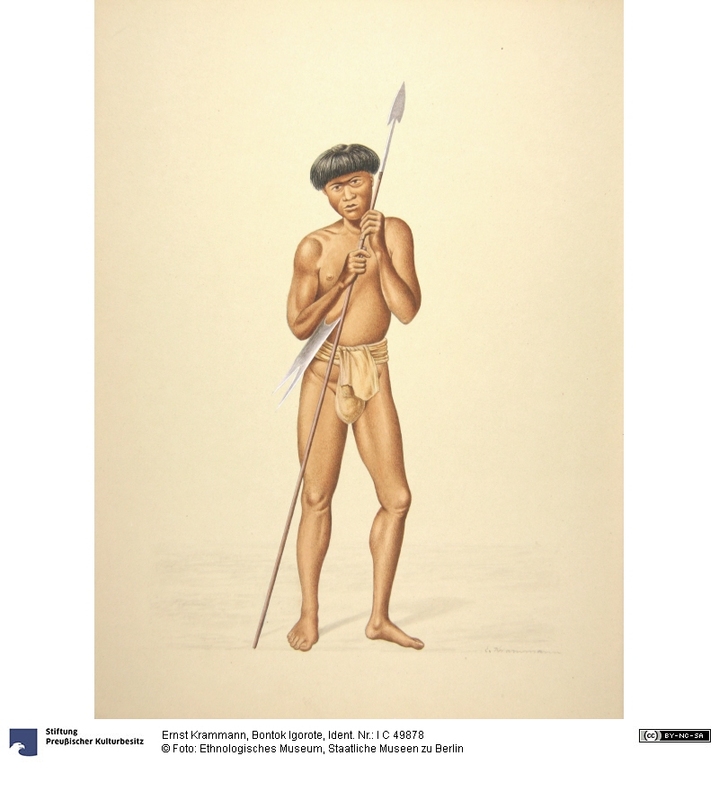 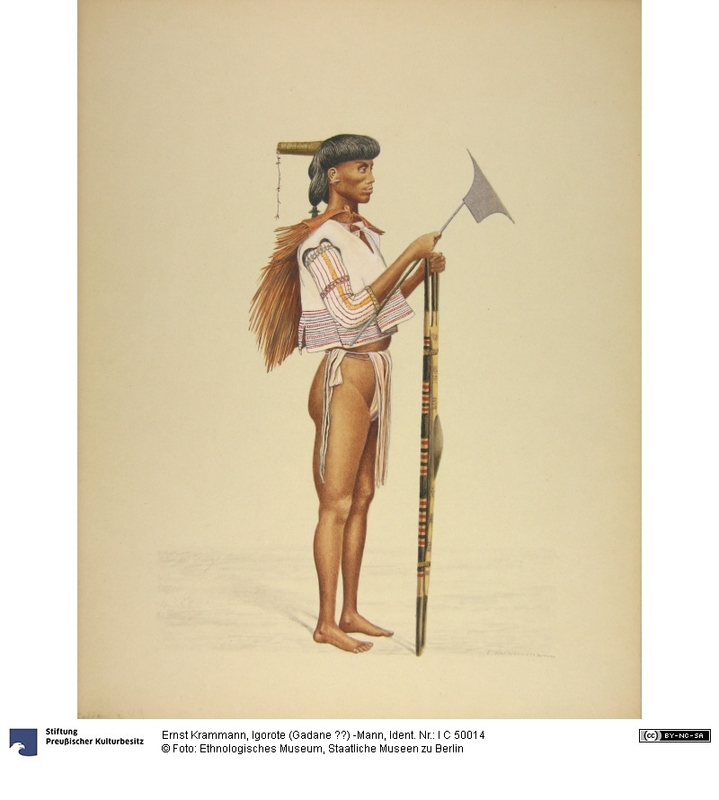 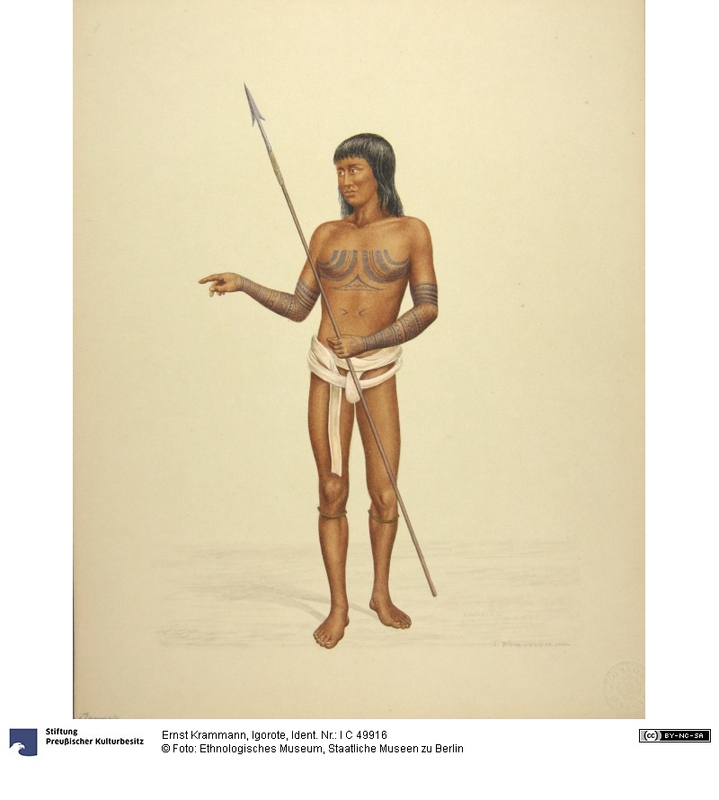 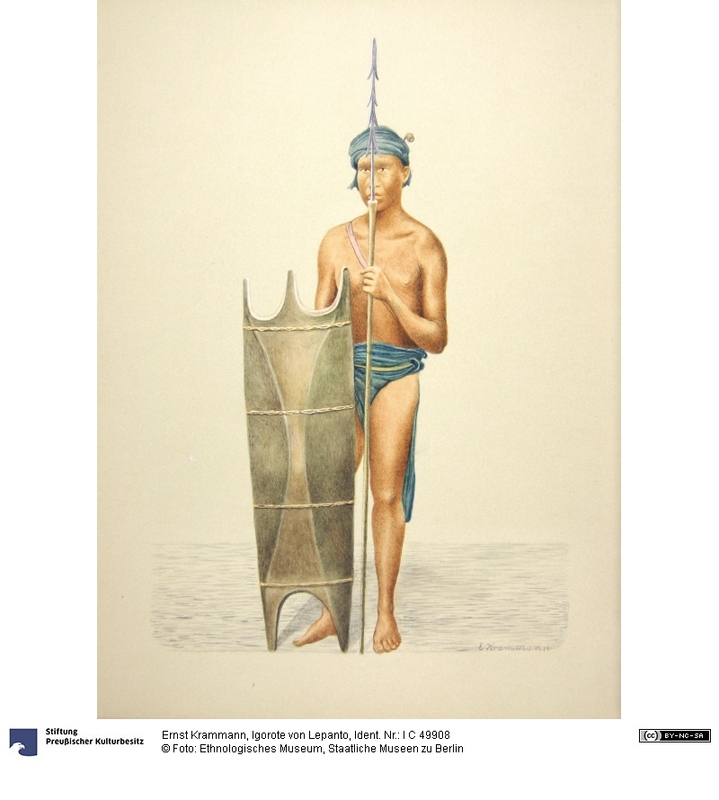 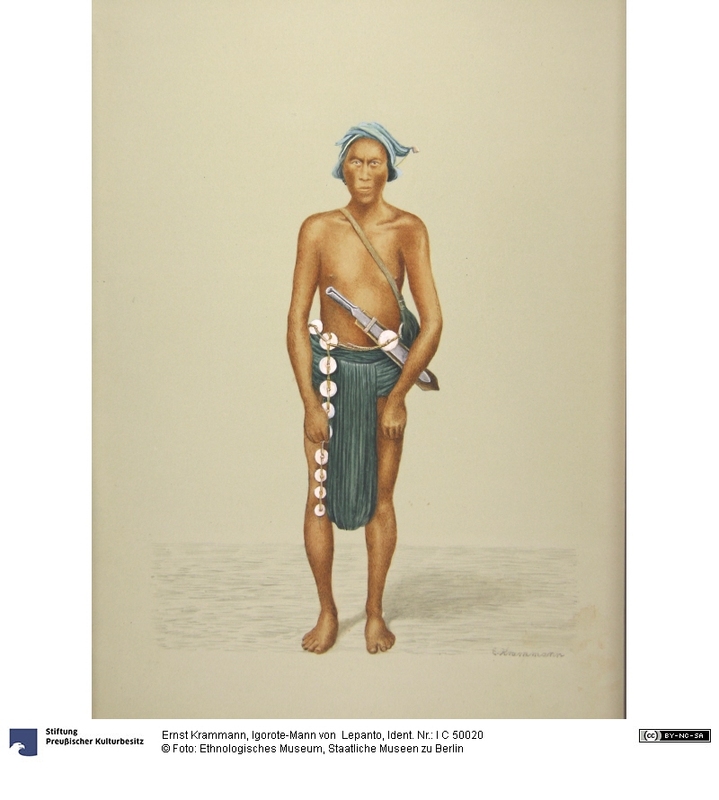 Krammann is far less knowledgeable than his contemporaries Adolf Meyer and Alexander Schadenberg, who produced the “Tipos Filipinos” of field photographs in the Cordilleras in 1891. It very much appears to be the case that Krammann worked from photographs (or vis a vis knowlege of the relevant photographs( that had already been made accessible to the museum by Meyer and Schadenberg. Particular detailing would not have been possible for anyone who has not done fieldwork in the Philippines to know. (3) And working from photographs changed the modeling of the bodies by Krammann. Noticeable are the disappearance of the dandy pose and the naif styling, and precision—if highly select—detail.

The shape of the head-axe and spear of the Mayaoyao (Ifugao) man, his haircut, and the inabnutan basketry backpack and what could very well be a deer leather backpack—examples of which still exist—is ethnographically precise. Similarly, the Kalinga shield exactly represents the silhouette, proportion-to-the-wielder, and details of the originals, which were filtering into European museums at this time. The Bontok man is shown wearing a mother-of-pearl disc, and the Mayaoyao man wears a ginut-tu, a belt of scallop-carved shell of the giant conus. This latter Ifugao also wears curved shell earrings whose only extant examples are in Euro-American collections dated to the decades when the 19th became the 20th century. And the Guinga-Kreiker is a most unusual portrait of a Jangan (or Guingan) Bagobo man sans upper garment, but wearing a pair of the large earplugs which is known from extant examples to be of ivory.

In being delimited to peoples called tribal, this tipos set circumscribes a field of study: people who are now called "indigenous" in Philippine law and popular culture. They have been separated from the mestizos and baptized natives as objects of ethnographic inquiry.

The proto-ethnographic eye seeking to know human variation did not begin in the 19th century. The Boxer Codex of 1590 is an early version if not prototype. Also relevant to the careful study of tipos del país of all sorts is the inclusion of exotic human beings within arrays of creatures of the imagination. In the Codex are possibly re-drawings of peoples who were known vassals of China (from the perspective of China, which is likely the source of original drawings), together with Chinese mythological beings. Hence it is the gaze of the superior being, as locus and exercise of power, that is established in the cultural form of the tipos. The power to survey and classify belongs to the makers and consumers of these classifications of humans and other creatures that, to the surveying eye, are perched between the known and unknown. 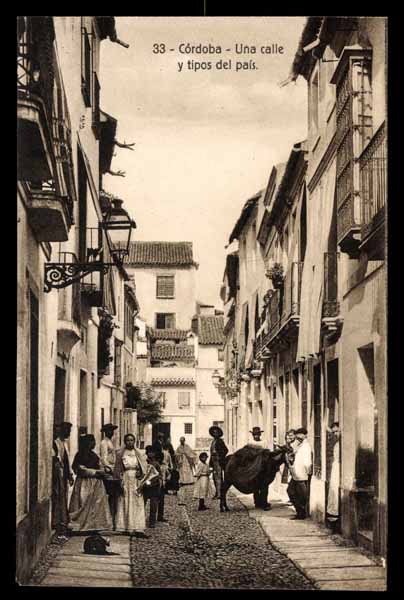 Postcard from Cordoba, Spain
Classifying the strange was not reserved for distant lands “discovered” by conquistadores, evangelists, and scientists in the service of empire building. Until the early 20th century, Spain and other European countries traded in painted and then photographic tipos of their own los países. Images circulated of Galician, Andalusian, and other peasantry in their exotic “costumes” and marks of poverty. To the cosmopolitan Madrileño or rich Catalan merchant of the late 19th and early 20th century, these paisanos could well be as far away as a “Tagal” in the islands halfway around the world. These others were regarded as feral and uncivilized, but insofar as “costumes”—good to keep in the line of sight. To the 21st century Filipino, the tipos del país are collectively a lesson in the power of the all-seeing eye.