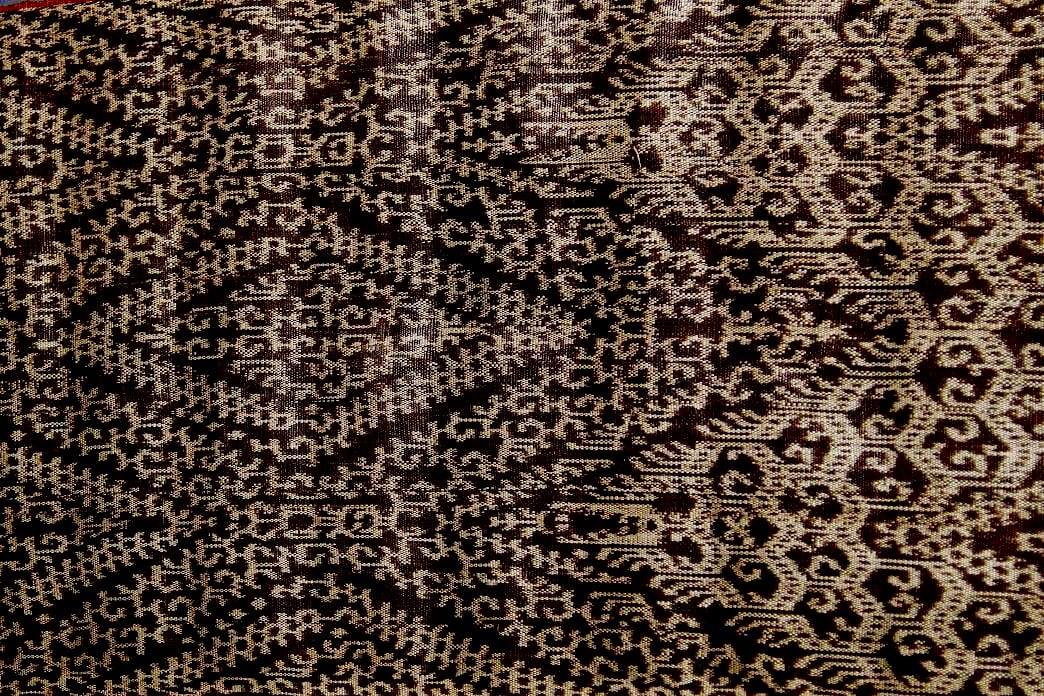 Warp ikat-dyed abaka, a panel generally referred to as tabih amlatu by the Blaan. Tabih is a widely dispersed Austronesian word for cloth that wraps the body; and amlatu is Blaan for one hundred, referring to the number of warp threads involved in this panel. Fu Yabing Dulo, Living National Treasure, Philippines, 2006, Collection of Arjho Cariño Turner, Photo by Cocoy Sexicon

24 January 2021. Gawad Manlilikha ng Bayan laureate Fu Yabing Masalon Dulo, passed just after midnight. She lived well into her 90's. She was a virtuoso of warp ikat dyeing in the traditional manner of the Blaan, her language group. 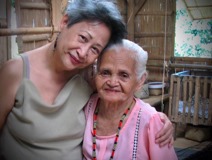 Fu Yabing Dulo and I — she with a rare smile. Fu Yabing has not been given to smiling, as she was a stern presence and stubborn, single-minded artist. Indeed she was not particularly inclined to mentoring, especially unworthy students.
Quite the Living National Treasure, she gifted all of us with compelling art — and, perhaps more importantly, also with a model of an artist's extraordinary focus, and aesthetic and technical control. In these, this was one powerful woman. In her 90's, she outlived the odds: singly staving off the extinction of the extraordinary art of warp ikat-dyeing at masterful levels among the Blaan, her language group. In addition to her 3 sons and daughter Lamina, and grandchildren and great-grandchildren, Fu Yabing's extended family includes the Philippines' culture and art official bureaucracy and its constituencies. The lamentation will be intoned variously.

Nevertheless only a handful know the full scale of what vanishes with Fu Yabing's vanishing; and what manner of a dirge really is necessary. Few know, alas, beyond curator and scholar circles. Except Fu Yabing herself. That full scale of Fu Yabing's departure might be limned with acts of imagination and scholarship that resurrects fragments of what her childhood most certainly was, among swidden agriculturists, before the Second World War. 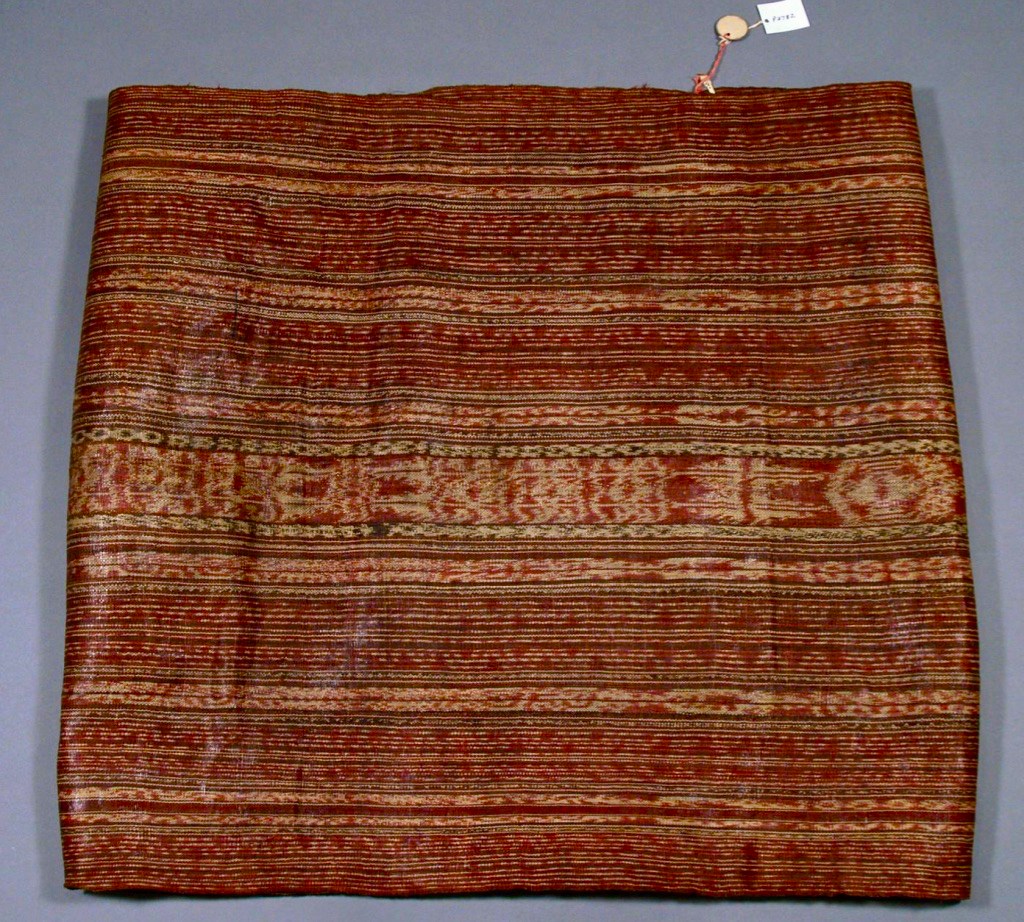 The small Blaan groups moved, through multi-generational time spans, from one to another clearing in the triple canopy rainforest of southern Mindanao of the early 20th century.

They wore abaka textiles with minute embroidery, so fine, the extant specimens in museums in Europe and United States verily require magnifying lenses to take full measure of.

Their large tabih, constructed into tubular garments, were warp ikat-dyed in individual compositions of a traditional iconography— compositions made possible by prior negotiations with divinities malefic, maladroit, munificent, during states for which the word "dream" is an inadequate equivalent. Fu Yabing's mother, whose mother before her, passed on more than the aesthetic and technical wherewithal to make these textiles — often, a tour de force — but more importantly the stoutness of heart to negotiate with unseen forces.

For a careless artist, a brusque weaver, would suffer consequences. The Blaan men (as did the neighboring Bagobo) took up headcloths of blood red (linumbos) after they had taken a life or more; as well as feather-festooned round hats.

The entire ensembles were constructed with the same zeal for tiny, expressive detail given to large pieces like upper garments, or to thin circles of vine and minuscule glass (trade) beads worn as kneelets just under the knee caps. These are only a few key pieces donned as expressions of concepts of body, society, and the big order of things. 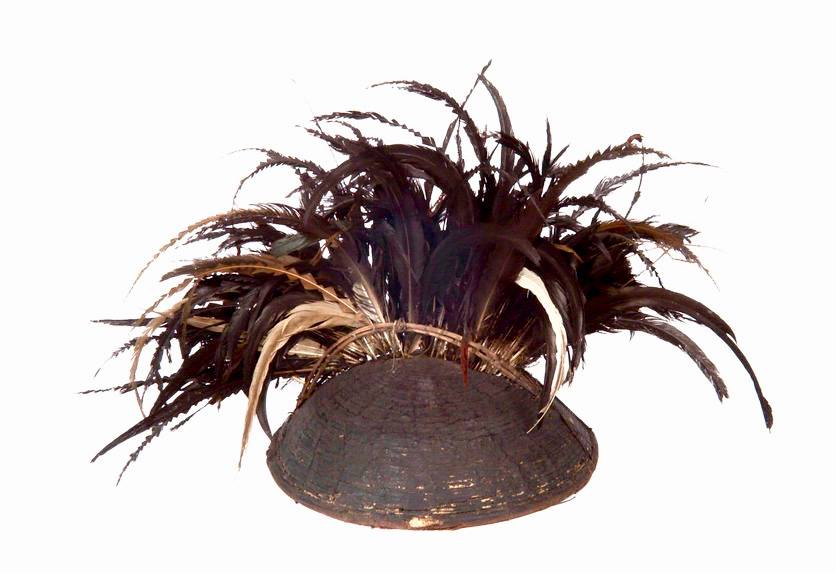 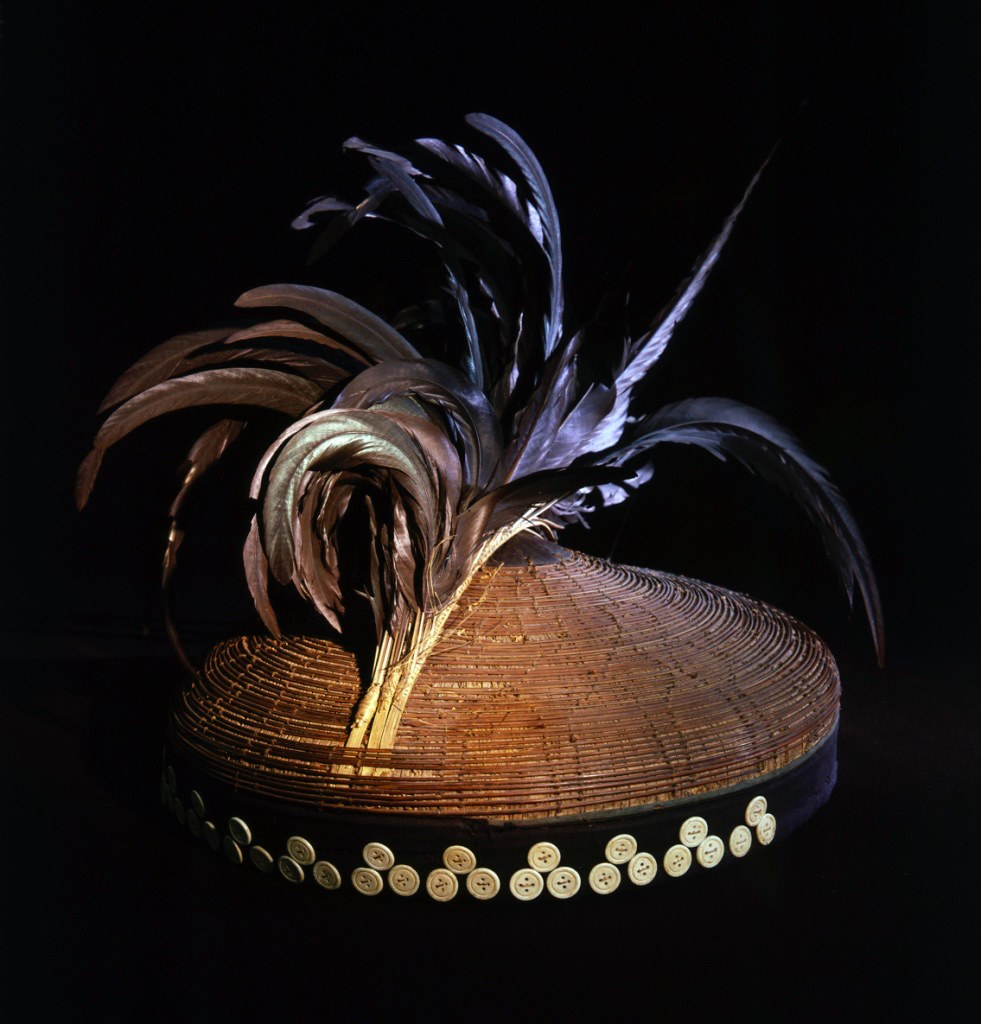 Male clothing ensemble, Blaan people, Davao provinces. Late 19th C - early 20th C. Field Museum of Natural History, Chicago, Illinois. Acquired 1911, Fifth R.F. Cummings Ethnological Expedition to Philippines Islands.
To assemble complete constellations of materials worn by the Blaan until the first half of the 20th century, specimens from the storages of some dozen or so museums in Europe and United States would have to be brought together. The selection assembled in this post is merely part of what would have been regarded as adequate for particularly important moments of "speaking" materially.

Fu Yabing as a child would have understood that these accoutrements on the body were materials worn by the worthy. And that worthiness concerned compelling embodiments of spiritual power.

This, of course, is an entirely different set of ideas from that holding up rigid caste systems that thrived beyond the archipelago that would be known as the Philippines. Island Southeast Asian animism pervaded Blaan life as it did, and does, all Austronesian speakers of the Philippines; and pervades these materials.

The contours of that animism is recognizable to most Filipinos still. But the highly articulate materializations sometime in the histories of different language groups, such as the Blaan, have been elusive, given the wholesale dispersal of Philippine material culture. 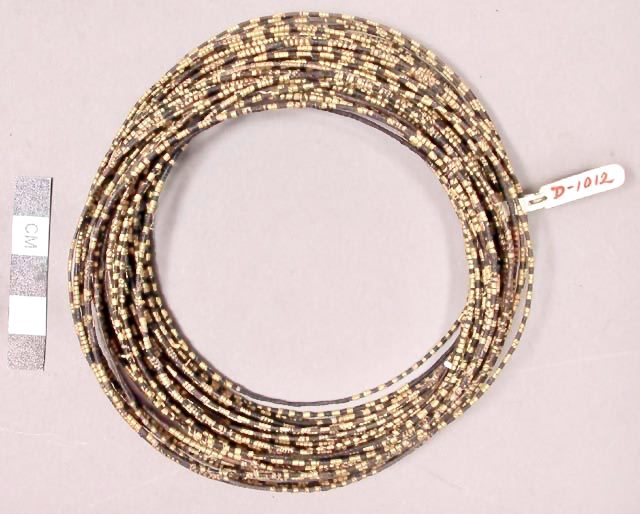 Kneelets worn by both sexes, Blaan people, Cotabato (spelled Bilaan in the record). Peabody Museum of Archaeology and Anthropology, Harvard University.
Fu Yabing lived her early life in this animism that structured the making of materials of breathtaking refinement. That world —with its own integrities, cruelties, and measures of the sublime— is in her mind.

And while she was able to pass on technique to her daughter, that memory of the interconnectedness of things and ideas among the Blaan will vanish with her soon. 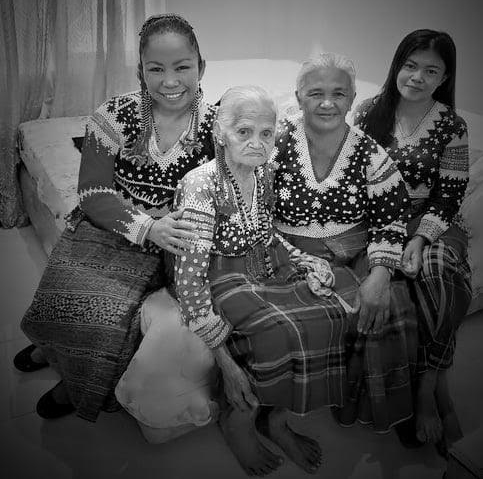 Fu Yabing with Arjho Cariño Turner, her grandniece (left) and (right) only daughter Lamina Dulo Gulili, whose daughter, Cristena Dulo Gulili is the young woman. Lamina has been mentored for years by her mother, and hope for the survival of expert warp ikat dyeing for the Blaan shifts to Lamina.

Child's tube skirt. Ine woven not stitched in. Blaan manner. (Note: all instances of either B'laan, Bilaan or Bila-an in the Mapping Database have been changed to Blaan after specific requests from the Blaan of Sarangani Province June 2022. This…