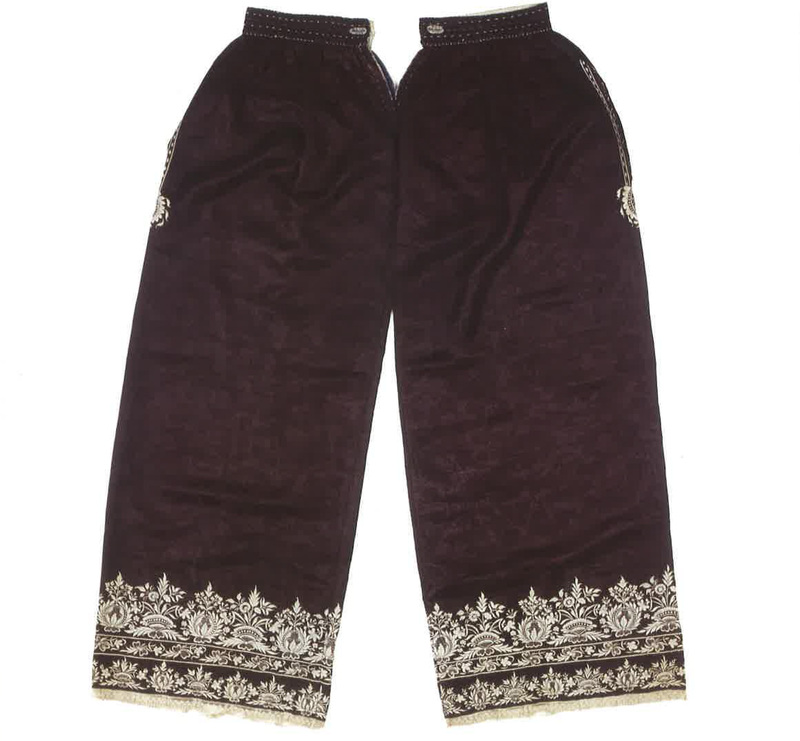 Fig 1 One of seven embroidered blue silk trousers in the collection of the Leiden Museum of Ethnology (Museum Volkenkunde). Accession No. RV-566-43.

In 1886 the French diplomat Mr. Bréjard, who served as Chancelier du Consulat de France in Manila from 1881-1886, offered 290 items of Philippine material culture to Dr. L. Serrurier, director of the Leiden Museum Volkenkunde: 52 from Manila and environs, 59 from Northern Luzon, and 179 from Mindanao. 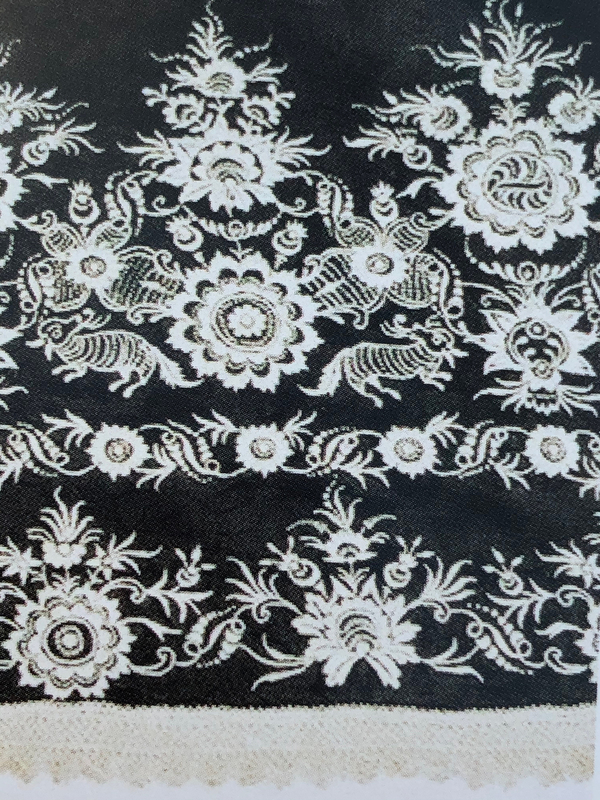 Fig 2. Embroidery detail along the hem Accession No. RV-566-42. Leiden Museum of Ethnology (Museum Volkenkunde)
Dr. Serrurier agreed to purchase the Bréjard collection–which entered the museum inventory with the serial number 566–initially with a possible publication in mind, which never materialized. Former Leiden museum curator Dr. Pieter ter Keurs notes that apart from the museum’s inventory and descriptions in a catalog by H. H. Juynboll in 1928, no other article, book, academic or museum discourse mentions the collection.

For 120 years, these objects and the culture from which they came were hardly noticed by museum curators and virtually excluded from professional discussions. It was only in 1991, while doing research for a doctoral dissertation, that I chanced upon the objects that were grouped under Bréjard's collection from “Manila and Environment” in series 566.

The museum’s inventory identifies the objects originating from Manila as Tagalog or mesties(mestizo). The most significant recovery among the 52 objects in the “Manila and Environment” section are seven rare silk trousers with embroidered hems and pockets (See Fig. 1).

These dark blue luxury garments incorporate woven geometric or foliate patterns on silk damask with overlays of white embroidery around the side pockets and at the bottom. The gracefully undulating relief embroidery features floral and vegetal forms, some with Chinese dragon and phoenix motifs, in symmetrical patterns arranged in one, two, or more registers. (See Fig 2)

Anchored at the waist with fabric ties, the generously wide legs provide cool comfort in the warm tropics. No two pair of trousers are exactly alike. The length and girth of each pair suggests the approximate height and weight of the owner: the shortest pair indicates a young wearer or, more likely, an adult of very short stature; a pair of unusually generous proportions suggests a particularly robust owner. The sizes suggest an average male height of about 5-1/2 feet if worn down to the ankles as portrayed in nineteenth-century watercolour paintings of the inhabitants of Manila (Fig. 3). 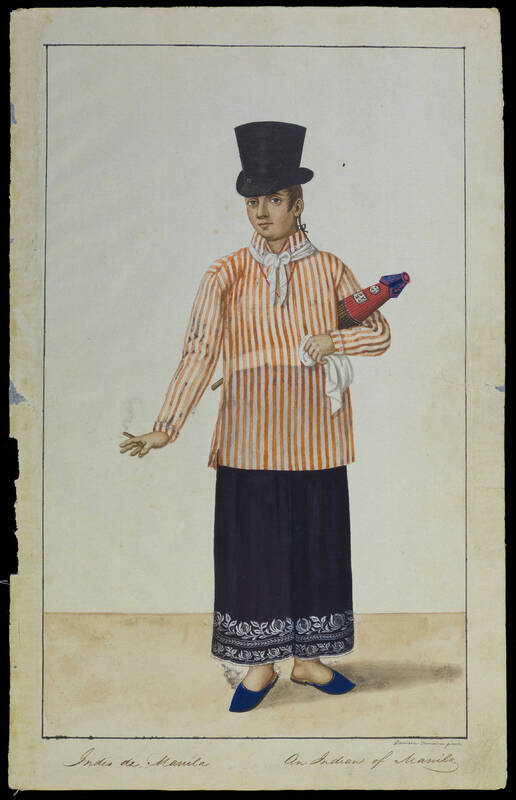 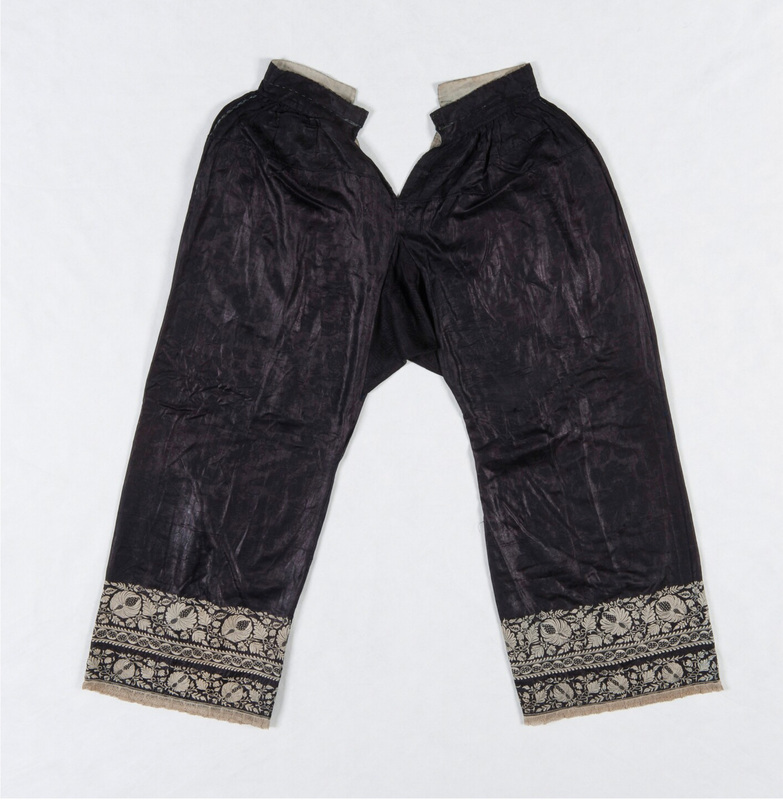 Much of what we know about colonial Philippine dress derives from nineteenth-century paintings of local inhabitants, their attire, and occupations that bring textual descriptions to life. The hybridity of sartorial ensembles are remarkable visual expressions of the wearer’s hybrid ethnicity and experience.

Various watercolour paintings portray the distinctive silk trousers worn by local “Indio” officials carrying the titles of aguacil del pueblo, capitan, principales, and gobernadorcillos (Fig. 5). It is noteworthy that, while luxury trousers prominently identified powerful men in the political hierarchy, no special dress appears to have been reserved for influential women, whose garments convey social, financial, and civil status, rather than political sway. Were women’s importance restricted to the home, but not political governance, even though early accounts note their contribution as income-earners and sometimes breadwinners? 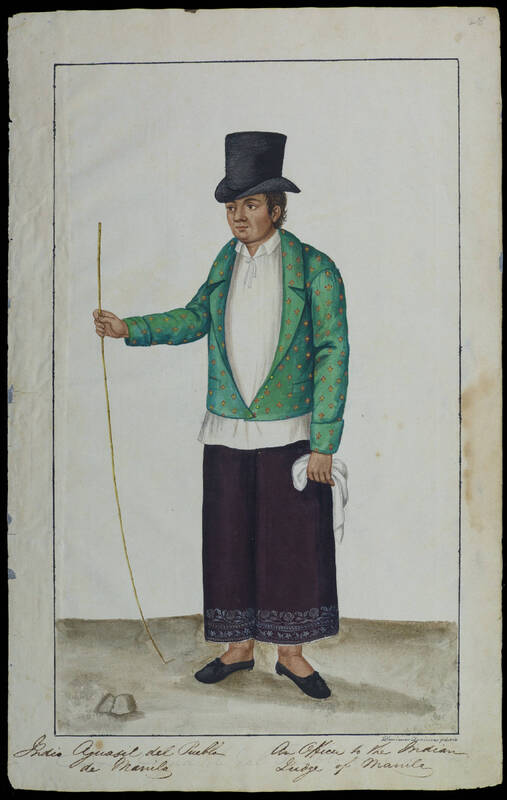 Since the publication of the seven silk trousers at the Leiden Museum Volkenkunde (2004, 2007), I have located an eighth example in the Alfred Marche collection at the Musée du quai Branly in Paris (Fig. 6). 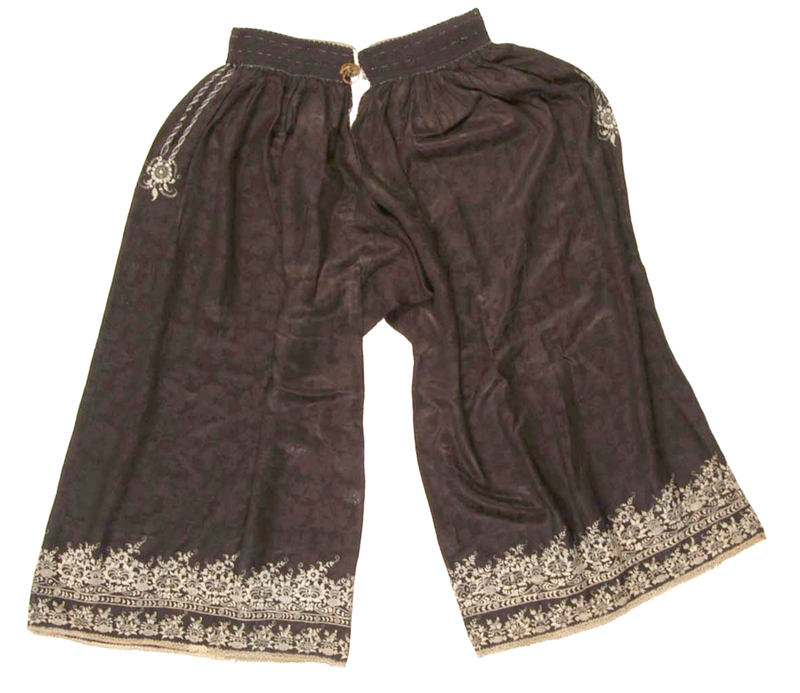 
More is known about the French naturalist, explorer, and collector Alfred Marche (1844-1898) than the French diplomat Mr. Bréjard who collected the trousers in Leiden. Marche voyaged to the Philippines twice, from 1879-1881 and from 1882-1884. It is most likely that the two Frenchmen encountered each other since the expatriate community in Manila was small and the dates of their visits overlapped. One is tempted to speculate whether the two men engaged with the same antique dealers in Manila.

These trousers were no longer widely used and were described as “antiguo” by the mid-nineteenth century. For example, a watercolor dated 1847 attributed to Filipino painter José Honorato Lozano (1821-1885) captions an image of a distinguished-looking man wearing the embroidered silk trousers as Capitan pasado con trage antiguo (“A Chief of the past with antique clothing,” translation by this author). The textual description provides more detail:
The costume worn by the figure shown in this drawing is that of an old
Filipino, as these days, very few can be seen in this attire with trousers
of wide silk (or some other cloth). Its lower part is embroidered.

This global mapping project may uncover more examples in diaspora to add to the virtual assemblage of dislocated spoils of colonialism, as scattered spolia remain trapped in metropolitan structures of appropriated cultures, excised from their original contexts.

Silk trousers with wide legs, decorated with white embroidery around the side pockets and the lower part. Bottom embroidery patterns feature top and bottom registers with alternating wreath-like forms and vegetal sprays that are larger on top and…
2

Silk trousers with wide legs, decorated with white embroidery around the side pockets and the lower part. Bottom embroidery patterns feature top and bottom registers with repeating floral medallions flanked by four-legged animal motifs that are…
3

Silk trousers with wide legs, decorated with white embroidery around the side pockets and the lower part. Bottom embroidery patterns feature top and bottom registers with alternating vegetal and diagonal double-wing forms that are larger on top and…
4

Short silk trousers with wide legs, decorated with white embroidery around the side pockets and the lower part. Bottom embroidery patterns feature top and bottom registers with undulating vegetal and floral motifs with textured petals that are larger…
5

Silk Trousers with Side Tie

Silk trousers with wide legs, decorated with white embroidery around the side pockets and the lower part. Bottom embroidery patterns feature top and bottom registers with diagonal foliate motifs that are larger on top, with alternating floral and…
6

Silk trousers with wide legs, decorated with white embroidery around the side pockets and the lower part. Bottom embroidery patterns feature top and bottom registers with floral medallions alternating with smaller hexagonal forms crowned with triple…
7

Embroidered blue trousers. Worn in the 19th century by the rich Tagalogs. (Translated from catalog entry)