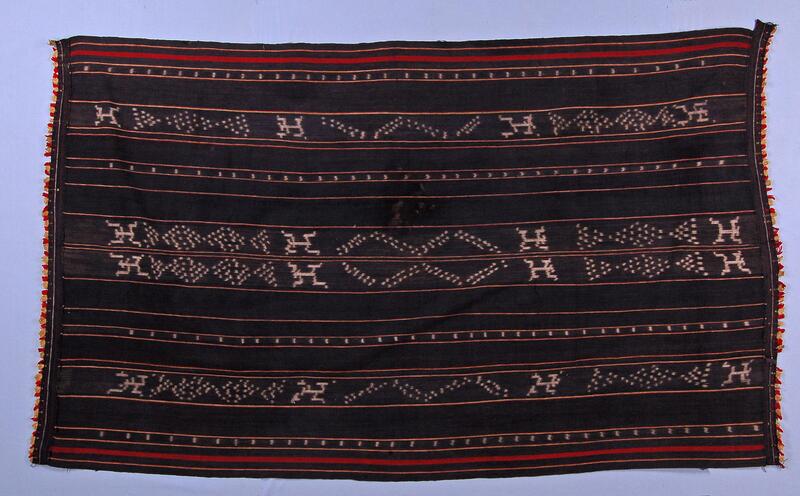 A textile and a photograph consist this exhibit. Created more or less simultaneously during the turn of the twentieth century, the pair, together, yield invaluable insight about the complexity of similarity and difference in island Southeast Asia.

The blanket is among the Philippine collection at the British Museum (BM) in London, United Kingdom; and photograph kept at the Museum of Anthropology and Ethnography of the Peoples of the World named after Peter the Great, in St. Petersburg, Russia. Called Kunstkammer in short, it bears mentioning that it is the oldest museum of this kind in the world, having been founded by Peter himself in the 1700's.

The blanket is warp ikat-dyed. It is identified as “Igorot” in the BM records, a word typically used pan-regionally for the peoples of the Philippine Cordillera, during the period of its collection and earlier. However the specimen is definitively identifiable as Ifugao.

The photograph is among a substantial number in the iconographic archive left to the Kunstkammer, in the collection of the American dentist and ethnographer Roy Franklin Barton. The American lived and studied among Cordillera peoples in the early twentieth century, in great part among the Ifugao and the Kalinga. Barton is regarded as an intriguing personality in the anthropological world pertinent to Philippine Studies, for having stayed in the Union of Soviet Socialist Republics in the 1930’s. 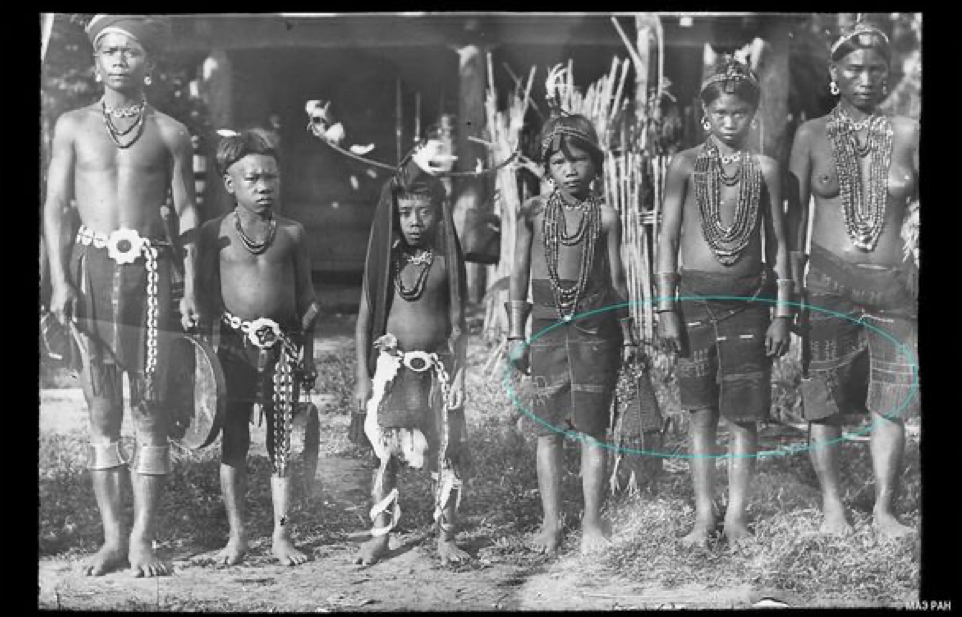 Barton worked as a scientist at the Kunstkammer from 1931 to 1940. He left artifacts, photographs, field notes in this St. Petersburg (Leningrad then) museum; as well as at the University of California, Berkeley, United States.

A warp-ikat dyed cotton textile that arrived in London in 1914 and a photograph taken in Ifugao in 1913 and collected in Leningrad, metaphorically came together for this Inventory. The pair essays a moment of repossession of memory. A re-collection, so to speak, of what was sundered, if only in the most fragile sense.

Ikat dyeing in Ifugao was an almost lost art in the twentieth century, but was happily revived before the century was over. The present state of the art is not robust but it is not lost. It is an important art tradition for Filipinos to remember, because a similar set of motifs was also ikat-dyed by the Isinai language group at the foothills of the Cordilleras (in the province of Nueva Viscaya).

It is known that the Isinai traded the ikat-dyed, indigo coloured burial shrouds with the Ifugao until the mid-twentieth century; and that Ifugao ikat was already on the wane in the early 20th century. (Footnote: The KIT Troppenmuseum in Amsterdam owns this kind of Isinai blanket referred to by both Isinai and Ifugao as kinuttiyan.)

The Barton photograph shows the girls and woman wearing ikat-dyed cloth during an important occasion. The loincloths worn by the man and child may also have a ikat-dyed band, but it is difficult to discern.

The depth of historical relationships between highland and lowland peoples of the Philippines is among the unfortunately ill-understood dimensions of life in the archipelago through millennia. The hard boundaries wrongly thought to exist between "pagans" and "lowland Christians" (and indeed "Muslims") have sundered cultural memory as much as the dispersal of Philippine archives and artifacts of collective self. 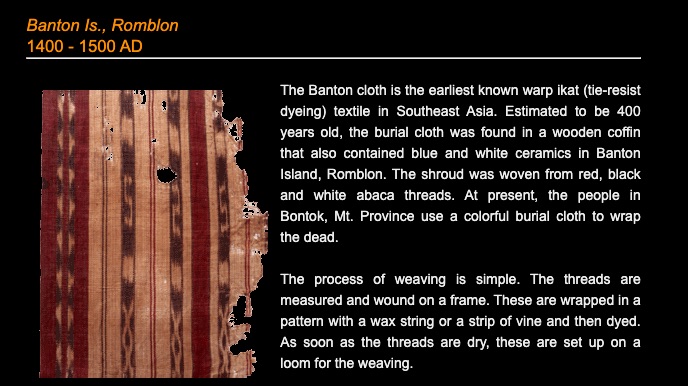 Screenshot of Banton Cloth from the National Museum of the Philippines. View original web site
As for warp ikat itself, it should be said that it represents a kind of Philippine map. It exists as a tradition as far north as Ifugao, and as far south as the Davao provinces. The oldest existing textiles in Southeast Asia are warp ikat dyed cloths found in a coffin burial on Banton Island, Romblon, Central Philippines. The four hundred year old cloths are with the National Museum of the Philippines, and are strikingly similar to both the Ifugao binudbudan and Maranao pieces called babalodan.

It should not surprise that variations of the same word for ikat (reserve or reverse dyeing) are found from north to south of the archipelago. It is binudbudan in Ifugao and bëdbëd to the Bagobo, Mandaya, Tboli, Blaan.

Oblong cloth-woven abaca textile with ikat pattern (warp threads reserve colored before weaving) in brown, white and red with turtle (?) Shapes inside a network of white rhombuses. Seams in the long sides, folded and sewn-in hems in the short sides.
3

Cloth woven from abaca fibre, with human and crocodile motifs in warp ikat in red and brown dyes against the natural colour of the abaca within warp stripes. A double set of narrow stripes along each selvedge. Across the middle of the cloth is a…
4