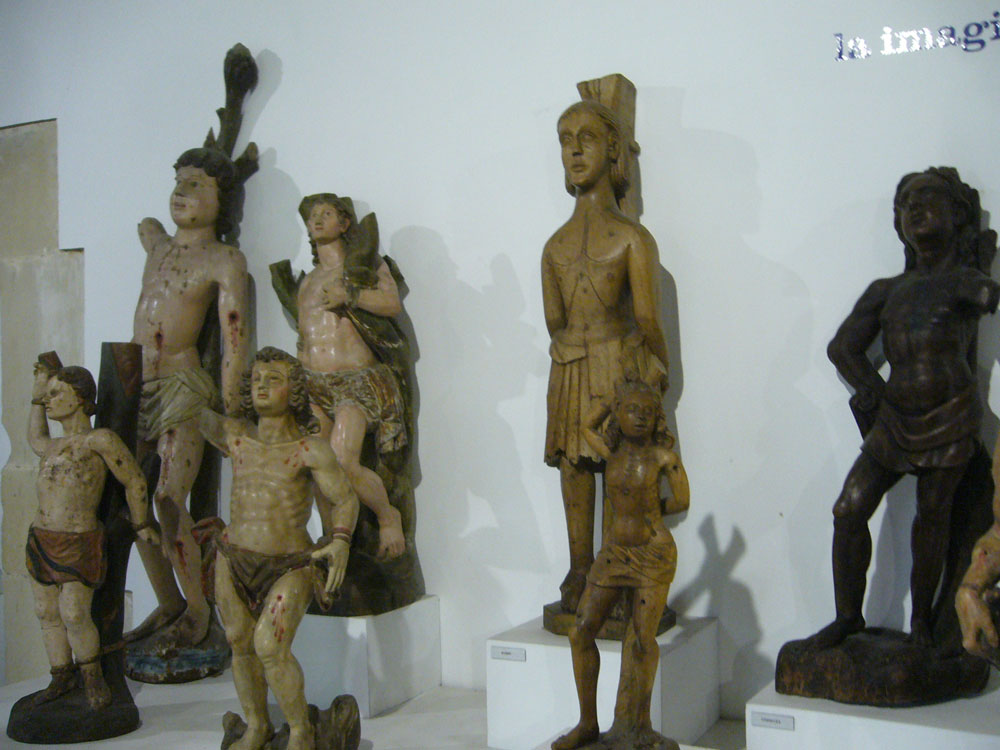 Detail on collection in Regina Coeli Museum (Photo by Alberto Vela Rodrigo)
Although Spain has an important Hispanic-Philippine legacy kept in its large museums, it also has a significant number of objects distributed in small parishes or provincial museums that are unknown and sometimes difficult to access. 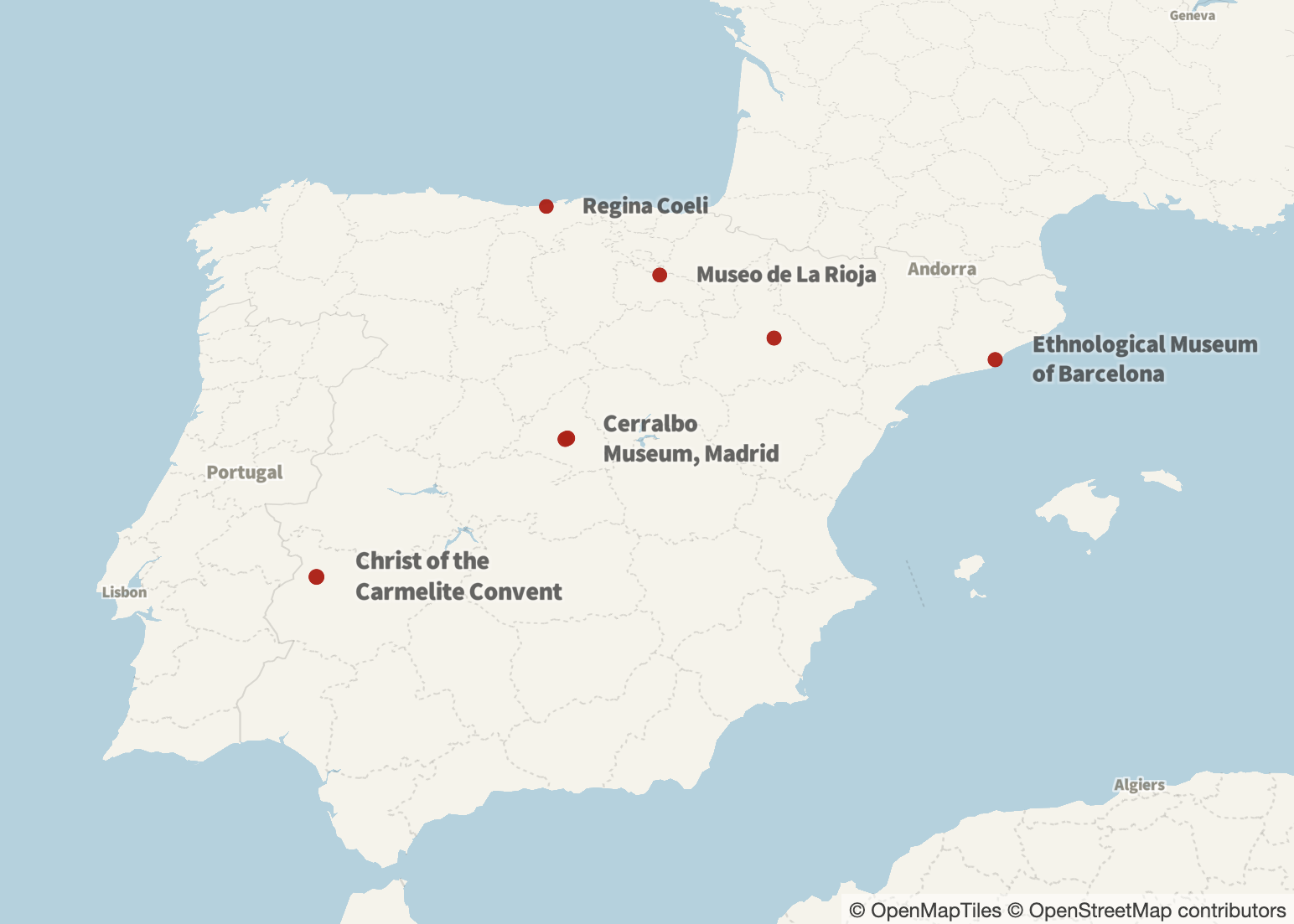 Unlikely places to visit in Spain for finding Philippine Material Culture See more
Locating the pieces has been a sometimes complicated task, but it has been very rewarding to find these Philippine-made objects of such quality and beauty. To approach my quest for Philippine objects in small museums and churches, I first made a list of those museums that I knew, first-hand, that had Hispanic-Philippine pieces.

First stop is Logroño. This is a cosy winery city in the North of Spain, where I used to live, and I still visit its museum every year. I was therefore familiar with the important Calvary in ivory that the museum owns. This sculptural group is composed of three figures by the Hispanic-Philippine School: a crucified Christ with polychrome carved hair, gaze to heaven, Virgin Mary and Saint John in a prayerful attitude, gaze at the sky and carved bodies following the curvature of the ivory tusk .

The Museo de La Rioja's collection has its origins in the 19th century as a direct consequence of the "Spanish Confiscation law " The law had a long historical, economic, and social process which began with the so-called "Confiscation of Godoy" in 1798—although there was an earlier precedent during the reign of Charles III of Spain—and ending on 16 December 1924. 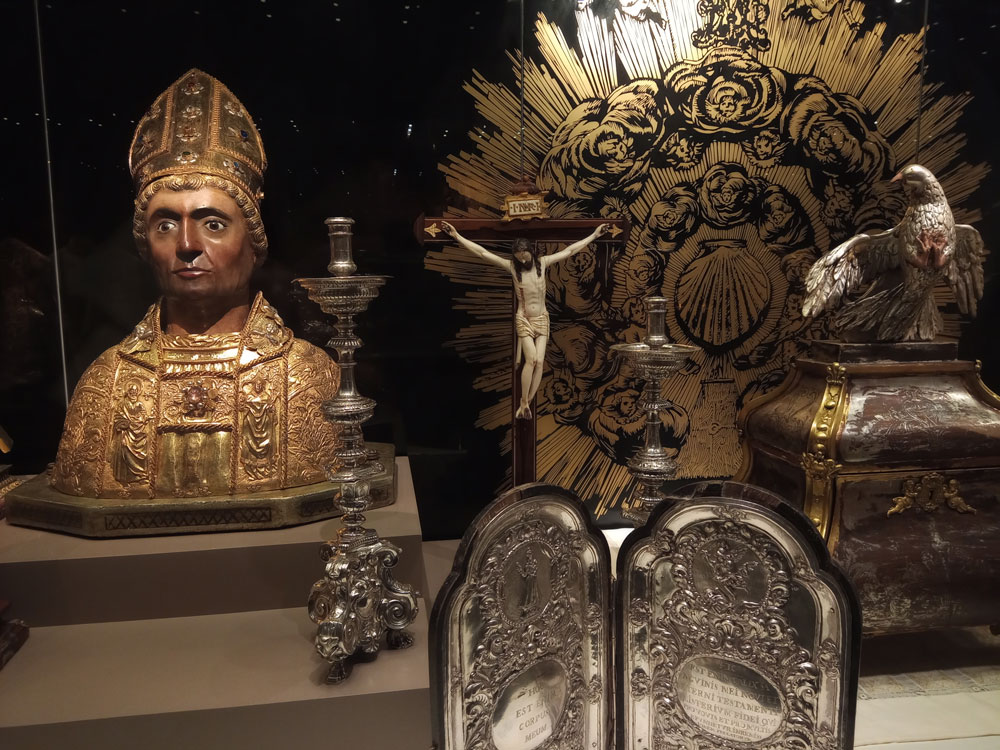 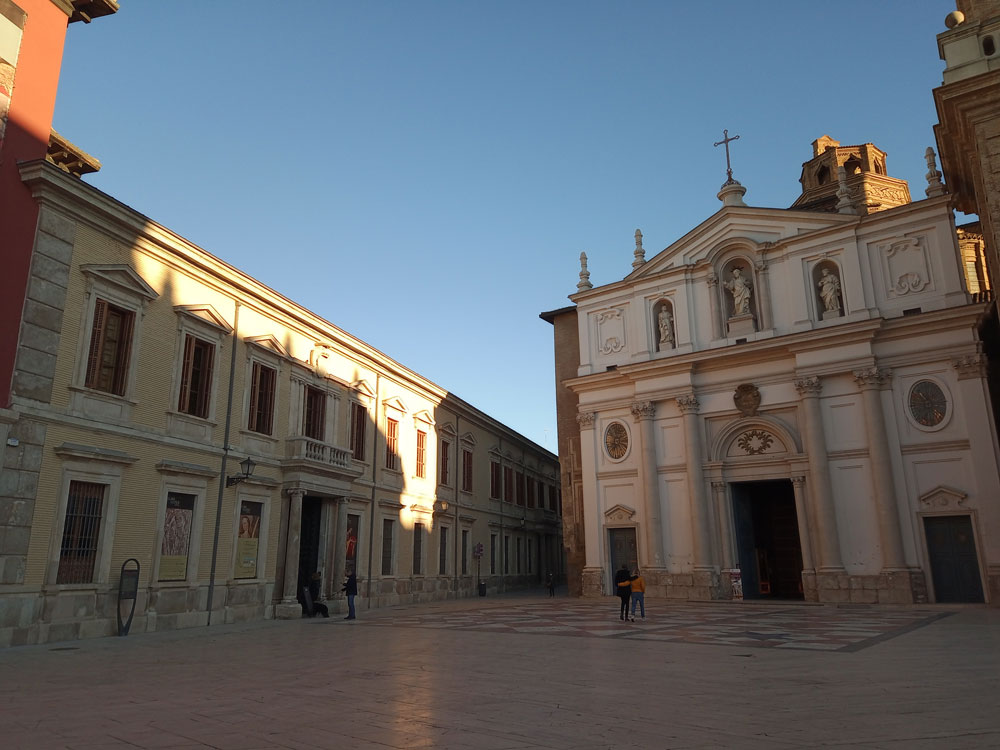 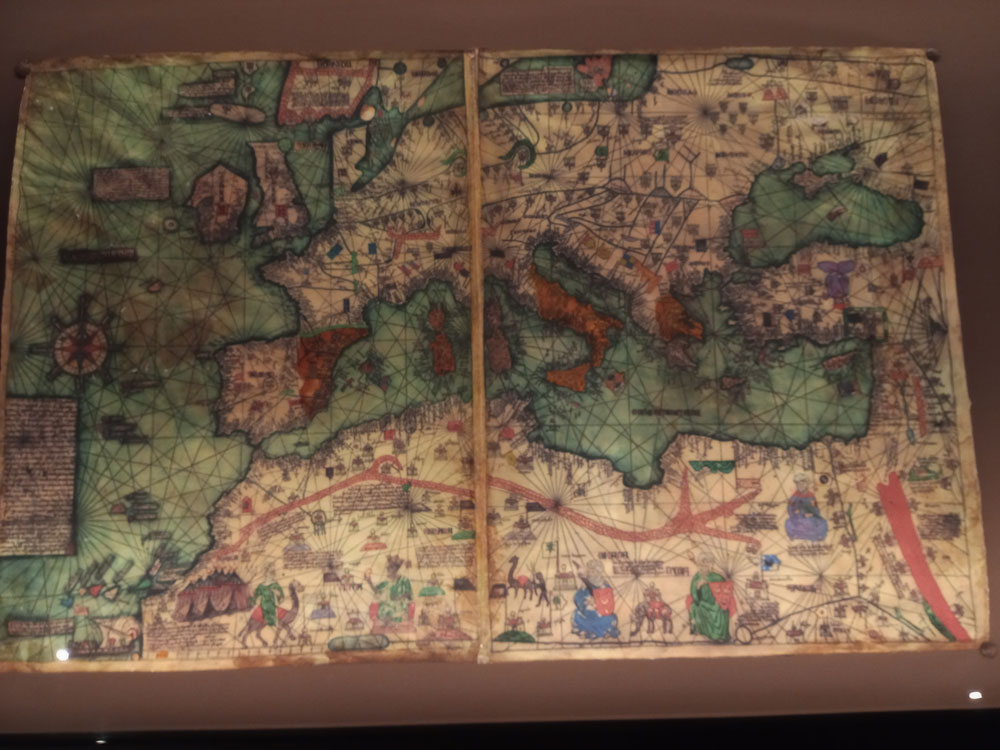 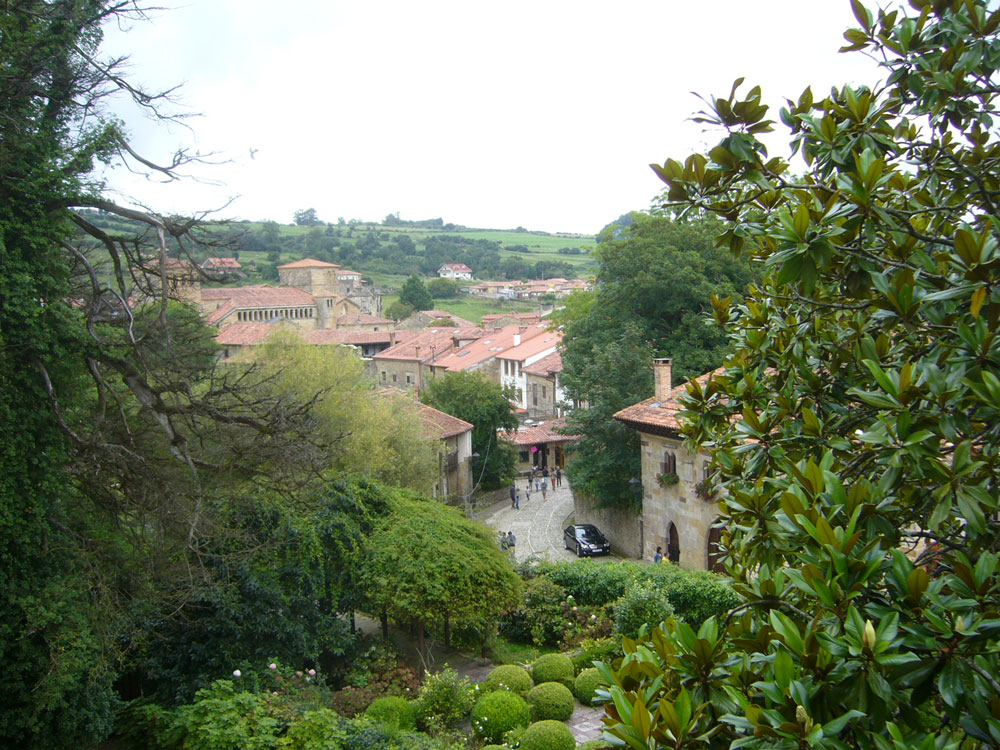 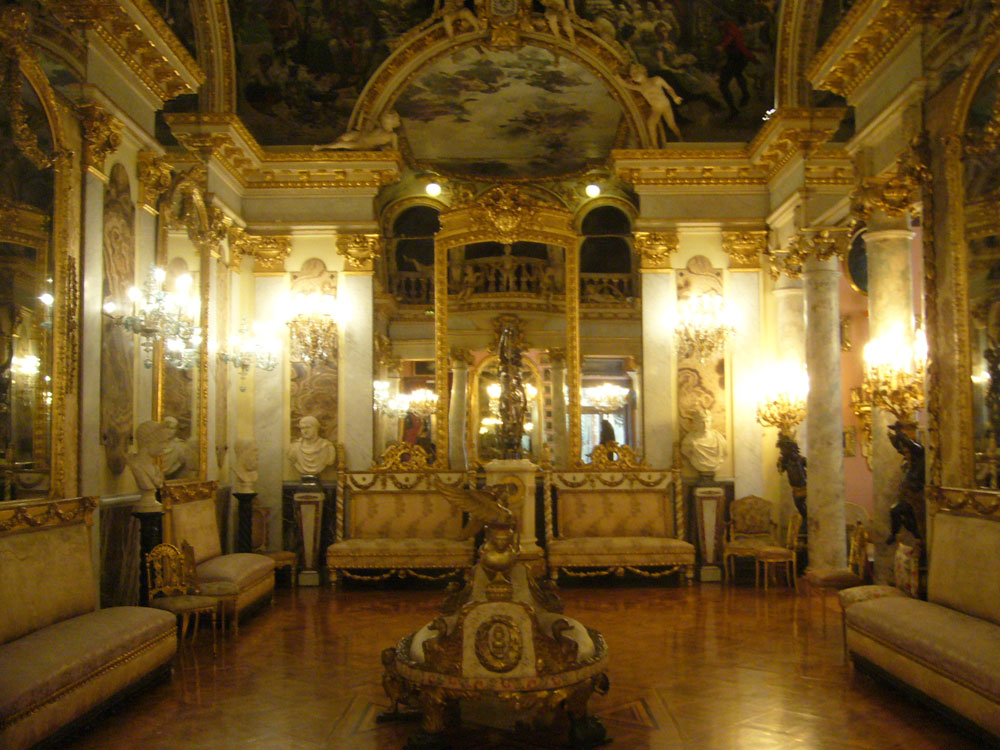 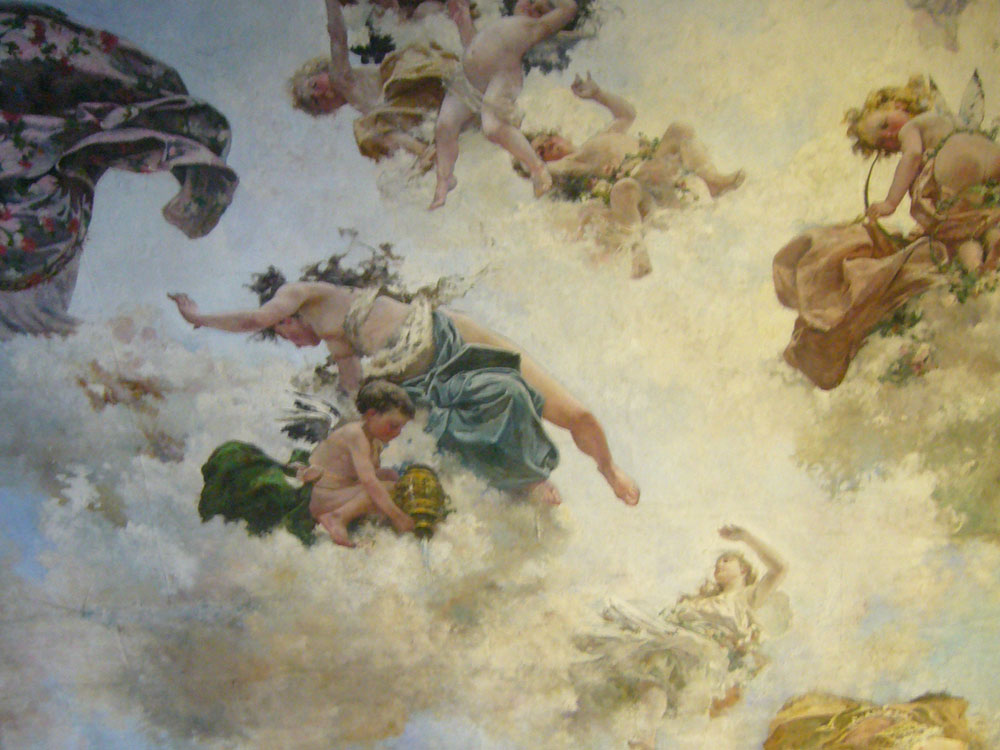 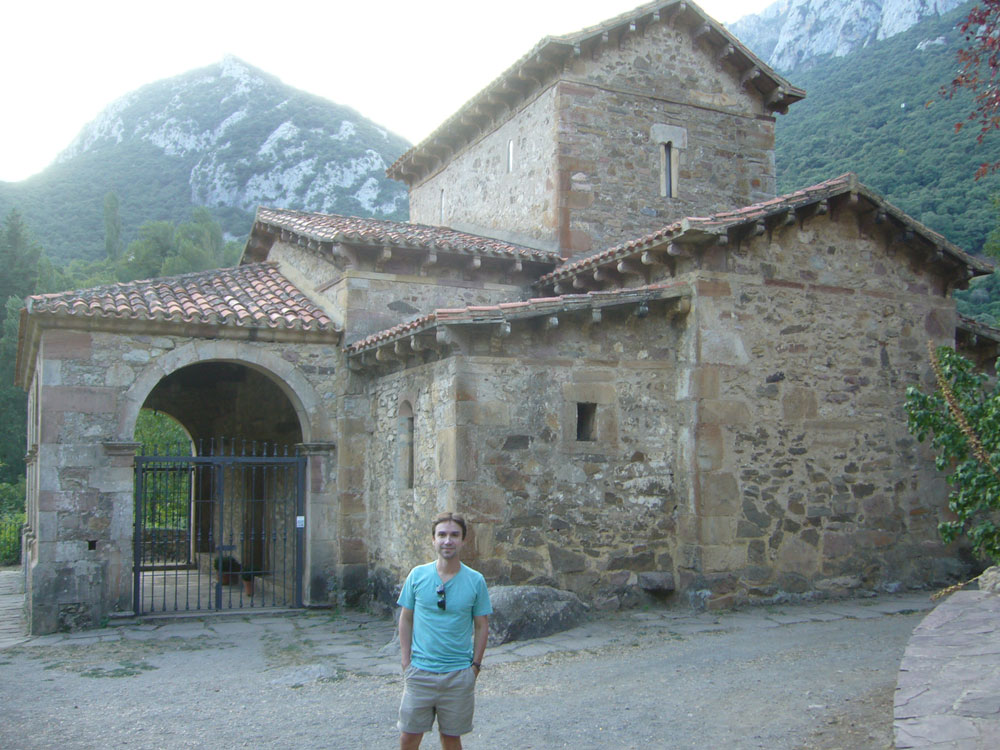 
In Logroño, the assets of the Church were declared national property through a decree. In 1844 the Provincial Monuments Commissions were created and objects of devotion were deposited in the provincial museum. As mentioned, one such example is the magnificent 18th ivory Calvary. Manufactured in the Philippines for the Convent of San Francisco de Calahorra, Spain, it was purchased by the Convento for its use but later on acquired by the Museo after the Confiscation Law was executed.

Aside from the more well-known repositories of Philippine objects in the Prado or the Anthropology Museum of Madrid, the Cerralbo Museum is a small State-owned museum also in Madrid. It houses the art and historical object collections of Enrique de Aguilera y Gamboa, Marquis of Cerralbo, who died in 1922. My BA thesis dealt with the Chinese section of the Marquis of Cerralbo collection, so I was also aware of the rest of the pieces, including the two extraordinary Philippine bitongs in bamboo on display. These pieces are elongated, hollow bamboo cylinders, decorated on the outside with horizontal stripes in high relief, separated with bands of floral motifs that frame scenes with characters between houses and trees. They were household trousseau utensils that were used to store or transport things. 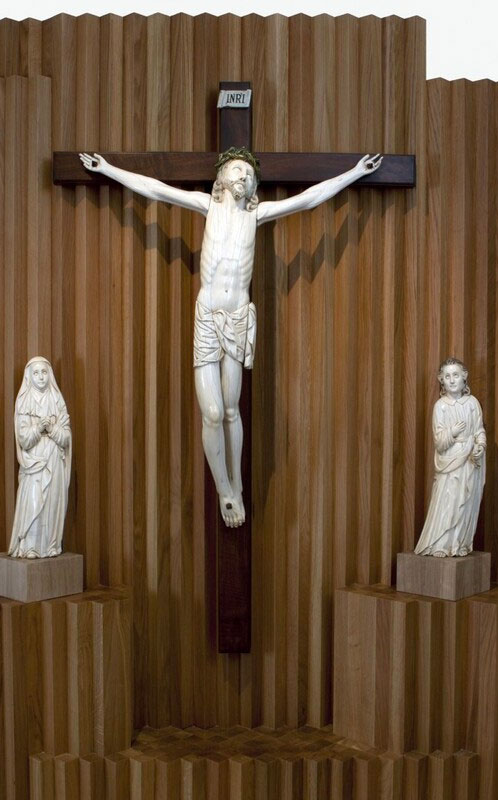 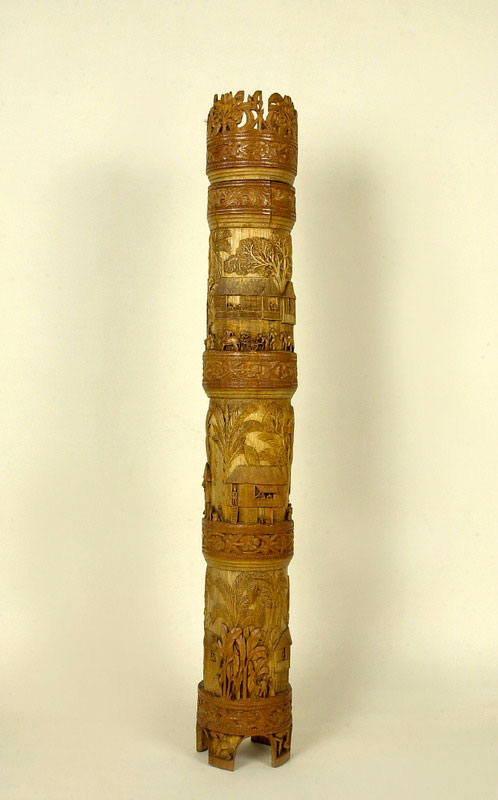 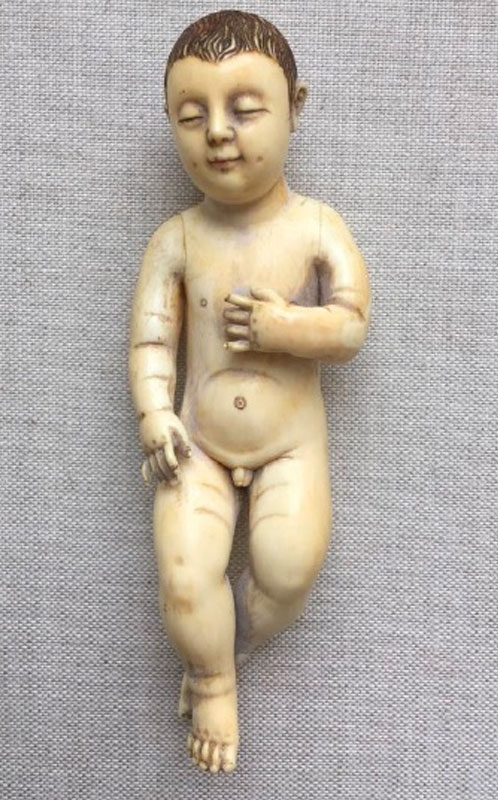 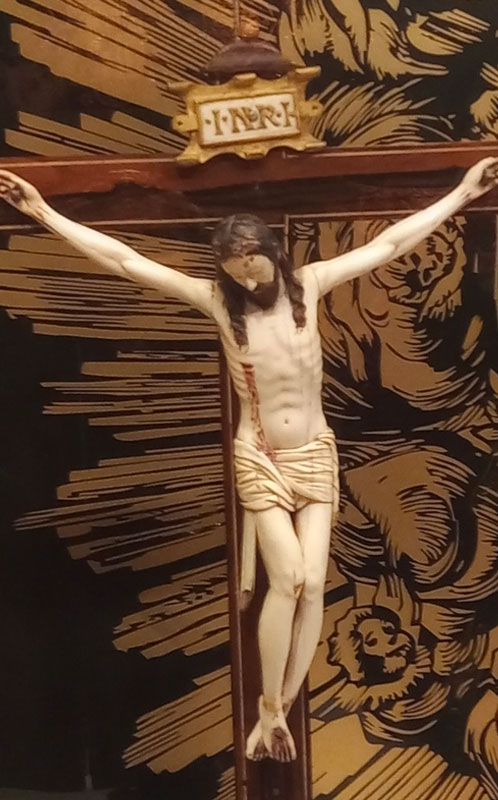 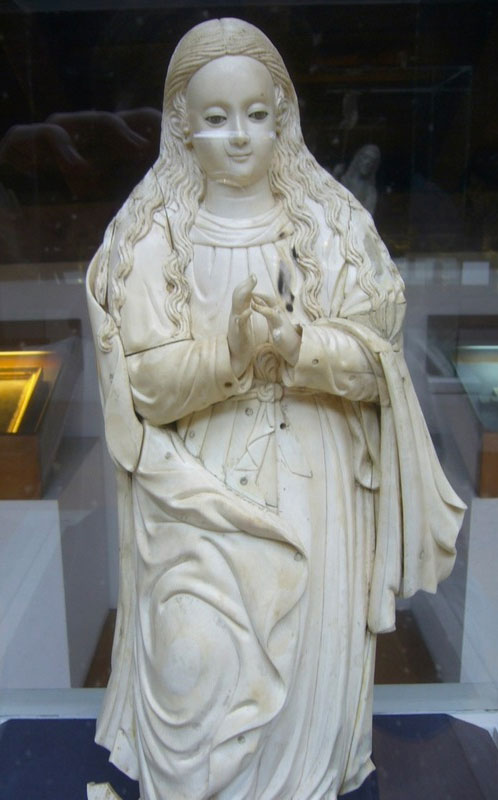 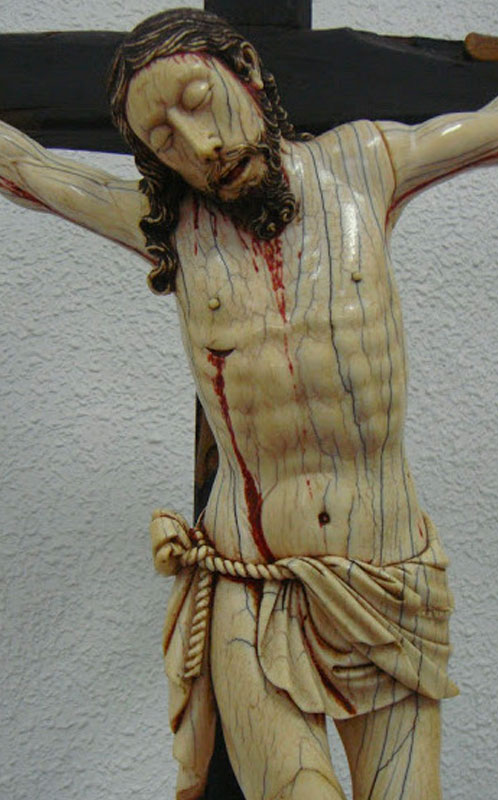 Also, near Madrid there is a small and interesting Baroque city built in the 18th century by the rationalist architect Juan de Goyeneche. This city is Nuevo Baztán, where it is possible to find an impressive processional sculptural group formed by four different pieces in carved ivory. This group contemplates a crucified Christ in a wooden cross with a radial silver crown, and an application of red paint on the body that simulates blood. The Virgin with the Child presents a serene attitude in contrapposto. Saint John the Baptist also presents a forward leg with an added raised arm made with an anchored piece .

Outside of these very well-known cities, I arranged a visit with the curator of the new Alma Mater Museum for religious art in Zaragoza. They allowed me to photograph the delicate ivory Christ from the Santa María del Pilar Monastery, which they had recently acquired. This Christ is the only Hispanic-Philippine piece of art they have and one of the few in the area. Zaragoza (also known in English as Saragossa) is formerly the site of the powerful kingdom of Aragon, who after its union with Castille would send many Recollects Augustinian Missionaries to the Philippines. Not finding any documentation of these object from C.E.R.E.S (a Digital catalogue of Collections of Museums in Spain), I asked to take personal photos.

I also visited Santillana del Mar last summer, a small and beautiful town on the Cantabrian coast that has an outstanding Diocesan Museum. After driving on winding roads on lush green mountains I arrived at the former Dominican convent of Regina Coeli. This museum displays an extraordinary collection of Christian art produced in the different regions where Dominican missionaries were established. Among all the devotional and liturgical Christian objects from Spain and the rest of the world, the Hispanic- Philippine pieces caught my attention for their quality and presence. Speaking with the director of the Museum, he recommended to read a specific bibliography about these pieces as some of these objects are difficult to find in large and well-known catalogues. One magnificent piece is a Hispanic-Philippine ivory Inmaculada. Represented according to the apocalyptic vision this figure has very fine facial features that denote seriousness and simplicity. It features glass eyes and pierced earlobes for placing earrings, this last feature inspired in the tradition of Buddhist statuary, what talks about a cultural hybridization process between Spanish and Philippine patterns. Virgin Mary appears in an attitude of prayer and wears a tunic with embossed drapery around the neck and is covered with a cloak .

Lastly, one needs to visit the Christ of the Carmelite Convent in Talavera La Real (Badajoz) to contemplate a magnificent ivory Dying Christ. The general anatomy of the figure breaks with the rigidity of the typical Filipino models, inspired by the Spanish. The general profile of the Crucified is defined by the stylization of the torso and the lower extremities, it adapts to the curvature of the elephant’s tusk used as a sculptural support, which is more pronounced in the larger Christs. The Filipino Hispanic Christ is a gift from the former archbishop of Manila and later of Guadalajara, doctor Don Diego Camacho y Ávila (1695-1712) to his brother Don Francisco Camacho y Ávila, alderman of the Cathedral of Badajoz. He would assign it along with other pieces sent: "an ivory Christ with its base and other pieces that make up the cross that came from Mexico to Spain" for the decoration of the chapel, which he had ordered to be built in the Carmelite convent church of Talavera la Real. The Philippine Christ made a long journey from the Philippine Islands to reach the Talavera convent. In the first stage it followed the Spanish navigation trading route known as the Manila Galleon (also known as Acapulco Galleon, since it was its final destination in The Spanish Americas, or the China Ship). It has been among all the shipping companies, the one that has had the longest life .

Without the slightest doubt, it has been an interesting and enriching research process. Finding these objects in small collections has been rewarding. Working with a ready database like the one offered by Mapping Philippine Material Culture from SOAS pushed me to document these discrete objects and hopefully encourage the readers to trace and meet these objects for themselves.

_______
*Alberto Angel Vela Rodrigo, is Associate Professor, at the Department of English and German studies at the University of Zaragoza. He is a Research Fellow for the MPMC Project based in Spain and has contributed numerous inventories to the Project's data.

Hispanic-Philippine Christ in ivory and wood with polychromy in hair and beard, head reclined down, and application of paint that simulates blood. His body follows the curvature of the tusk.
2

Christ of the Carmelite Convent of Talavera La Real

Dying Christ. The general anatomy of the figure breaks with the rigidity of the typical Filipino models, inspired by the Europeans. The general profile of the Crucified is defined by the stylization of the torso and the lower extremities, it adapts…
3

Represented according to the apocalyptic vision this figure has very fine facial features that denote seriousness and simplicity. It features glass eyes and pierced earlobes for placing earrings. Virgin Mary appears in an attitude of prayer and wears…
4

Elongated, hollow cylinder, decorated on the outside with three horizontal stripes in high relief, separated with bands of floral motifs that frame scenes with characters between houses and trees. Base with three feet joined by arches and a…
6

Hispanic-Philippine Calvary of the Convent of San Francisco de Calahorra

Calvary of three figures of the Hispanic-Philippine School. Crucified Christ with polychrome carved hair, gaze to heaven. Virgin and Saint John in a prayerful attitude, gaze at the sky and a carved body following the curvature of the ivory tusk.