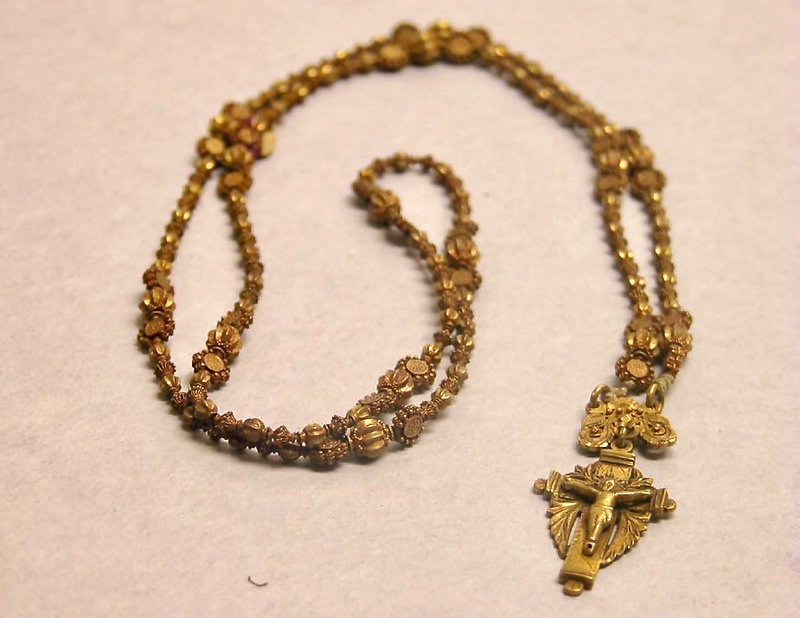 For now, the least rousing thought is the most obvious: that these are the accoutrements of faith and adornment of a mestizo elite in Spanish colonial Philippines. Beyond this stenographic note, however, there is more room to think; notably, about their beauty. What they are — the fine belongings of individuals of substantial means in a society becoming a nation in the 19th and early 20th centuries — contain epochal change and continuity, which occurred simultaneously; and which was expressed as beauty at the scale of the impressively small. 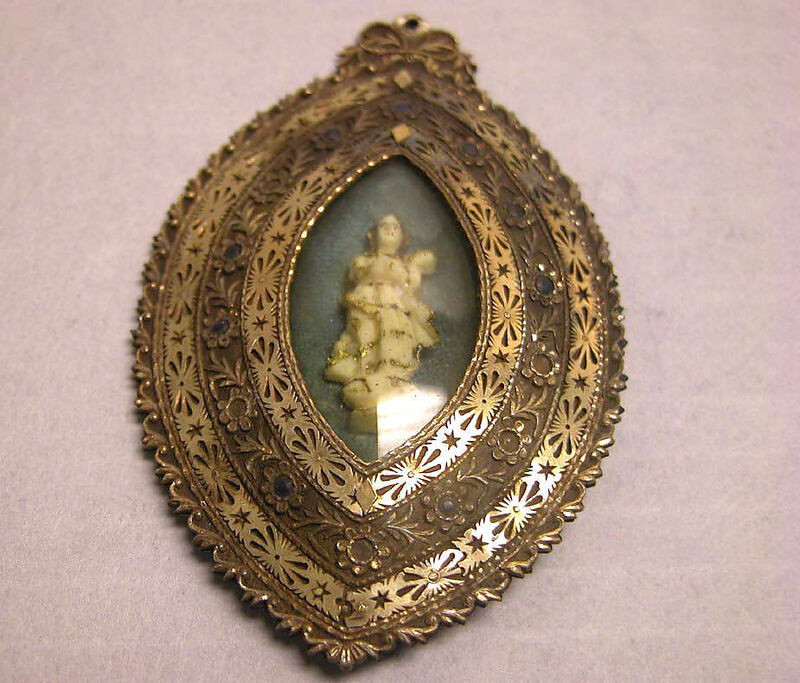 Pendant, 17th–19th century. Gift of J. Pierpont Morgan, 1915. The Metropolitan Museum of Art
Attention to that exquisite smallness can, firstly, move the eye away from the poignant conceits of an emergent bourgeoisie of a century-plus ago. Something else can be detected by the curious: an aesthetic continuity from pre-colonial Philippines. Form-wise, of course, the differences are obvious. European and Euro-American form entered the earlier Austronesian reworkings of Hindu-Buddhist ideas in gold jewelry. Archaeological sites dated to the 9th to the 16th centuries showed up technical and aesthetic commonalities across island Southeast Asia — which were all to change with the encounter with Europe. Yet the obvious divide that the pivotal Encounter imposed does not conceal the equally obvious continuities from archaeological to historical time. 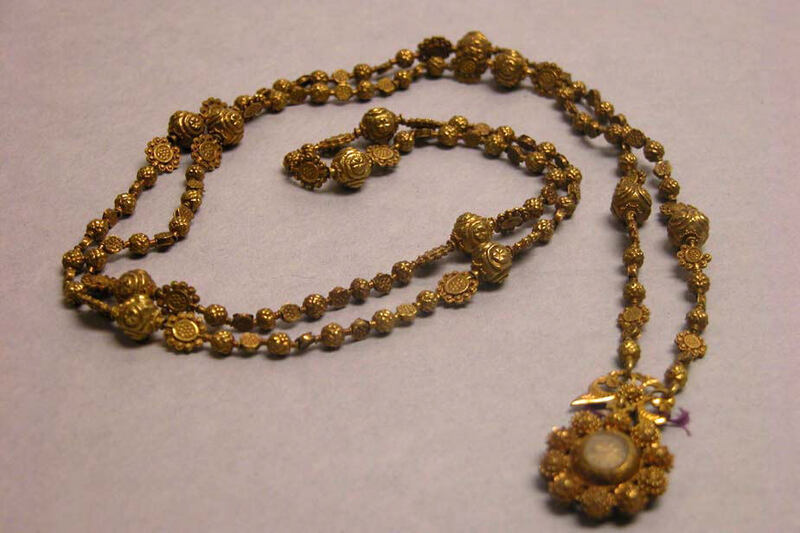 Rosary (Jewelry), 17th–19th century. Gift of J. Pierpont Morgan, 1912. The Metropolitan Museum of Art
The Met rosaries and necklaces are similar to Filipino clan heirlooms — although much fewer are to be seen today. The extant samples, including those at the Met, show disciplined goldsmithing that is most expressive at the tiniest scale. It is the same scale and technical flourish that define the archaeological material. Both sets of examples, separated by half a millennium and more, use the same techniques: prominently, filigree, granulation, and repoussé.

These two period groups similarly exhibit an inward-oriented look and feel, rather than outward projection. They appear to speak to the intimate and personal; don’t seem intended for public shock and awe, as would have been the case in kingdoms that did not materialize in the Philippines. Despite the thoroughgoing change in shape and purpose with the assimilation of Spanish Catholicism into local object making, these articles preserve a precolonial aesthetic. They contain and channel spiritual power rather than perform a show of it. These are reminders that, across the millenia, there was never a hard border between jewelry and spiritual expression. 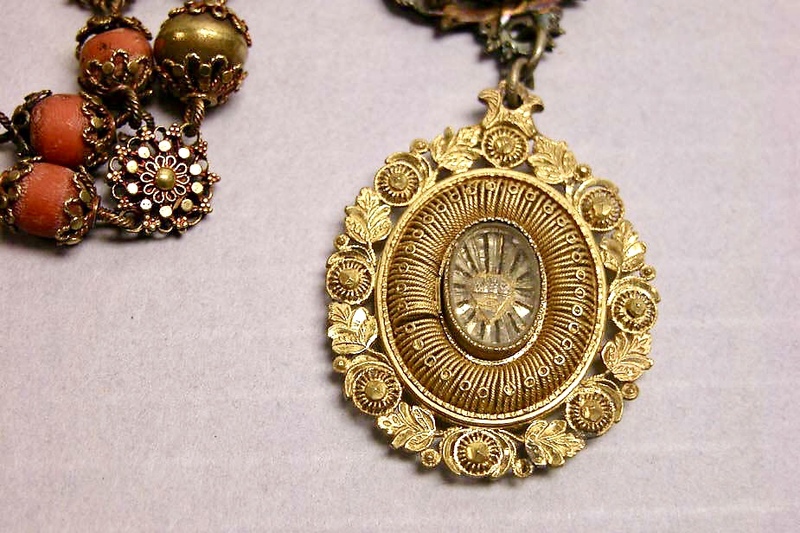 Necklace (Jewelry), 18th–19th century. Gift of J. Pierpont Morgan, 1912. The Metropolitan Museum of Art
Goldsmithing, in particular, constellated motifs from Philippine epics with virtuoso makings of tiny spheres, twists, beaten symbolic figuration, and, in fact, gold strip plaiting (which is to say, woven gold) — all of which provoke questions about the still under-examined concepts of power in datu-led communities. A similar interconnection between divine-cum-social order and remarkable workmanship is obvious in the Spanish colonial material. Which stuff could well be seen as “archaeological” material, even if young, at only about a century-some old. These, too, are exceptional fossils of a defunct life form.

Like the precolonial jewelry found in archeological sites, these Catholic articles belong to a specific time: when spirituality in an exotic, European worldview was also expressed in exceptional goldsmithing; in fact, in the island Southeast Asian repertoire of ancient techniques to transform gold and silver. These precolonial techniques and refinement on a tiny scale endured, even while adapted to different forms and meanings, as this artistry was to be deployed in the name of Catholic piety and capital accumulation through links with global commerce. Medieval Christianity was annealed to 19th century capitalism— in turn annealing change to robust aesthetic continuity, generating a knotty contra-tiempo. 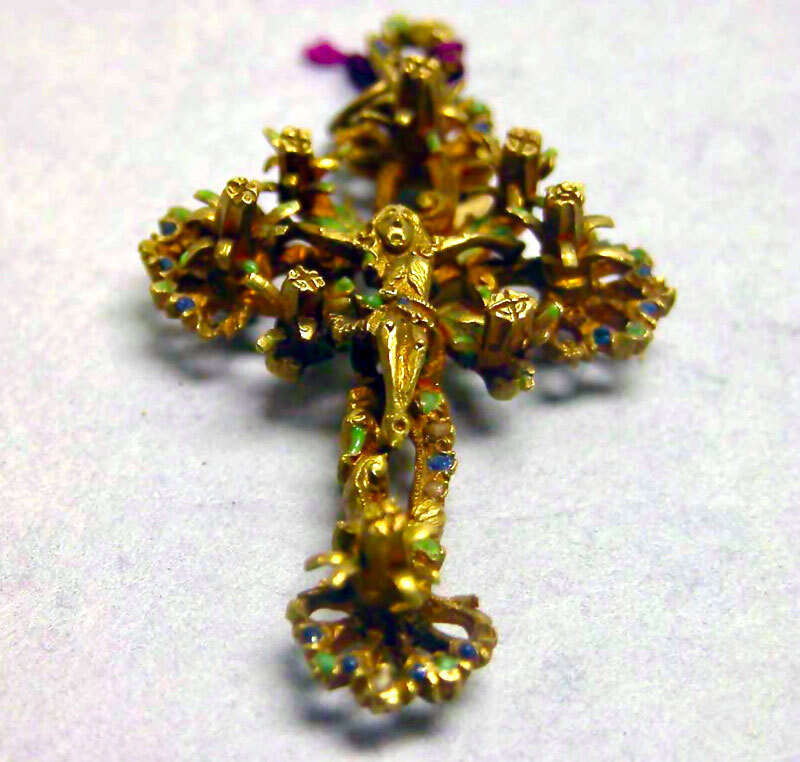 Crucifix Pendant, 17th–18th century. The Friedsam Collection, Bequest of Michael Friedsam, 1931. The Metropolitan Museum of Art
That change seems at surface to have been radical. The precolonial underlay —technique, worldview, and the aesthetics of the tiny —seems to have disappeared even if still in plain sight, at least until the early 20th century. In the examples at New York’s Met, the piety of the unknown makers and owners shows in the devotion to challenging levels of craftsmanship: worked gold that are as though lace or embroidery. This delicacy and everything else about the physicality of these objects are an essay on the complicated dynamic of change and continuity. But it is not at the level of the physical where radical shift is located.

The irreversible slide from one to another zeitgeist may be pinned down — historically and again “archaeologically” — via their milieux. Many of the Met pieces were donated by J. Pierpont Morgan, dominant American financier of the Gilded Age so-called, and epitome of the conflation of capitalism and the high modern period for the United States. The pieces were therefore literally touched by the hand of Capital. In this sense, religious or spiritual value would already have been drained from the pieces in their transition to becoming a legendary magnate’s family (or corporate) baubles. And while precolonial artistry was preserved in the pieces, this, too, would start falling into decline from this early 20th century forward.

Capitalism would supplant spirituality (precolonial and colonial) as driver for stunning goldsmithing for jewelry and religious accoutrements. But it was not to last too long. The emphasis in this discussion on technical-aesthetic continuity from precolonial times that was to survive the take-over by capital of piety: gold and silver religious paraphernalia festooned Catholic ritual up to the Second World War. And during that “American Period” of Philippine life, these religious trappings became excessive — and loud and unrestrained —where the plantation and cash economy boomed.

Past that war, when capital had to be reconsolidated, the Filipino goldsmithing declined precipitously. The artistry no longer linked to prehistory, nor to the adopted religion; and Capital was not going to sustain it.

It has been about more than half a century since the Catholic Church in the Philippines and elsewhere, seems to have stopped aspiring to the sublime in the artistic glorification of the divine. Except for the rare architectural marvel of recent decades, this Roman Church refocused its remaining cultural force into Humanist projects (social justice, human rights, poverty alleviation) that managed to sustain a pre-Humanist, Medieval Theocracy into the 21st century. Plastic rosaries would suffice. From the 1970’s, plaster sainted figures, faux flowers at altars, and pictures drawn from popular visual culture would mark church affairs to music drawing its sensibility from folk music of the American anti-war moment. No nostalgia for the lost goldworking is appropriate to developments that humanized this Church; and allowed it to cushion the harshness of the Modern.

Rosaries and Pendants from The Metropolitan Museum of Art 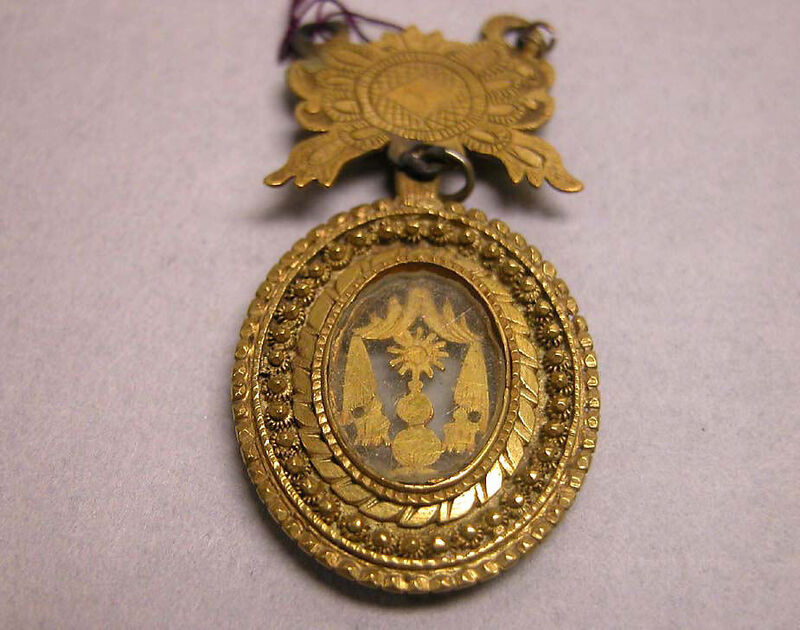 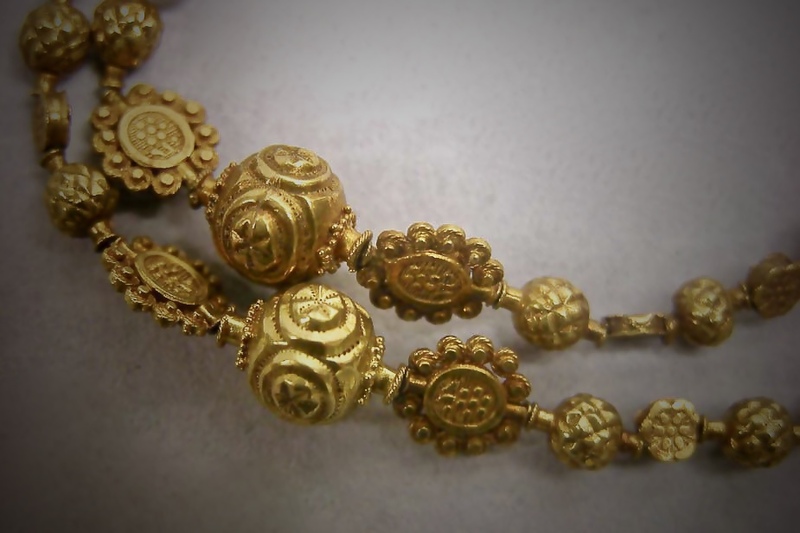 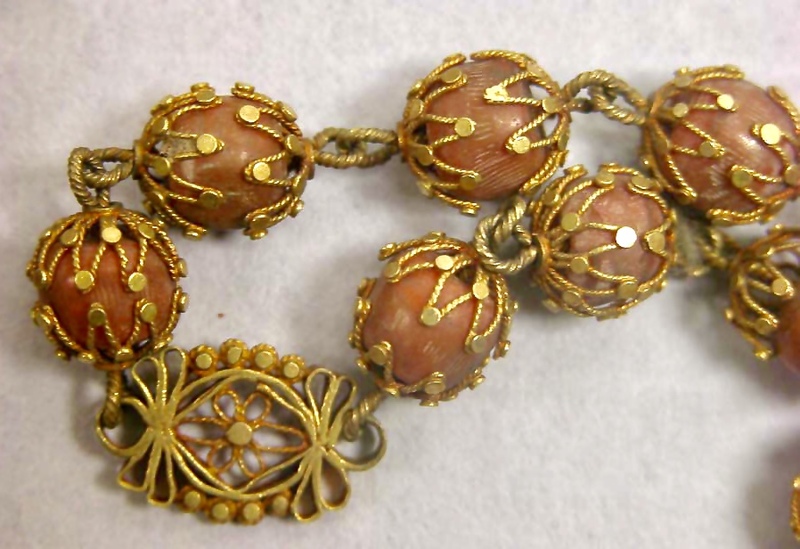 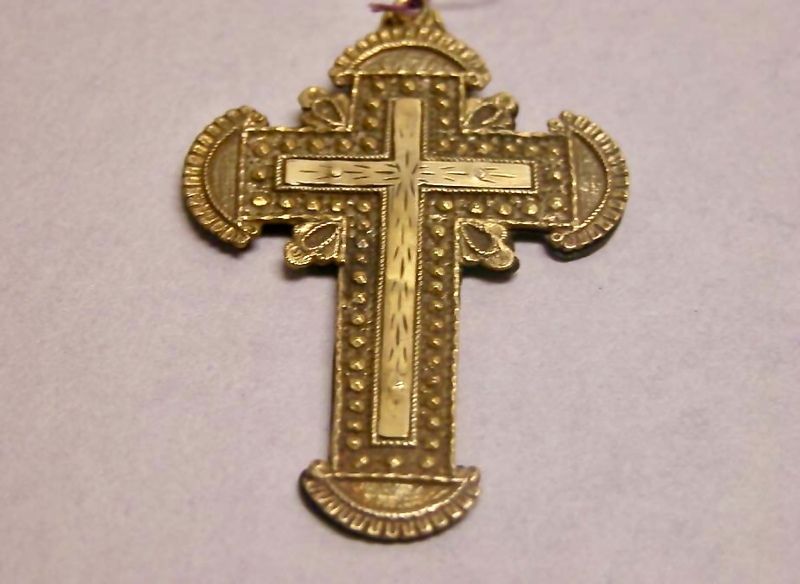 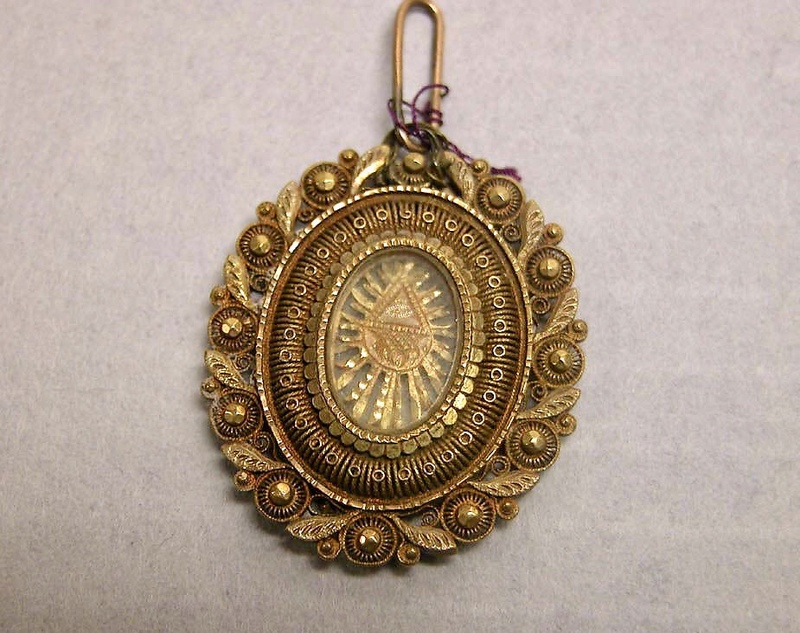