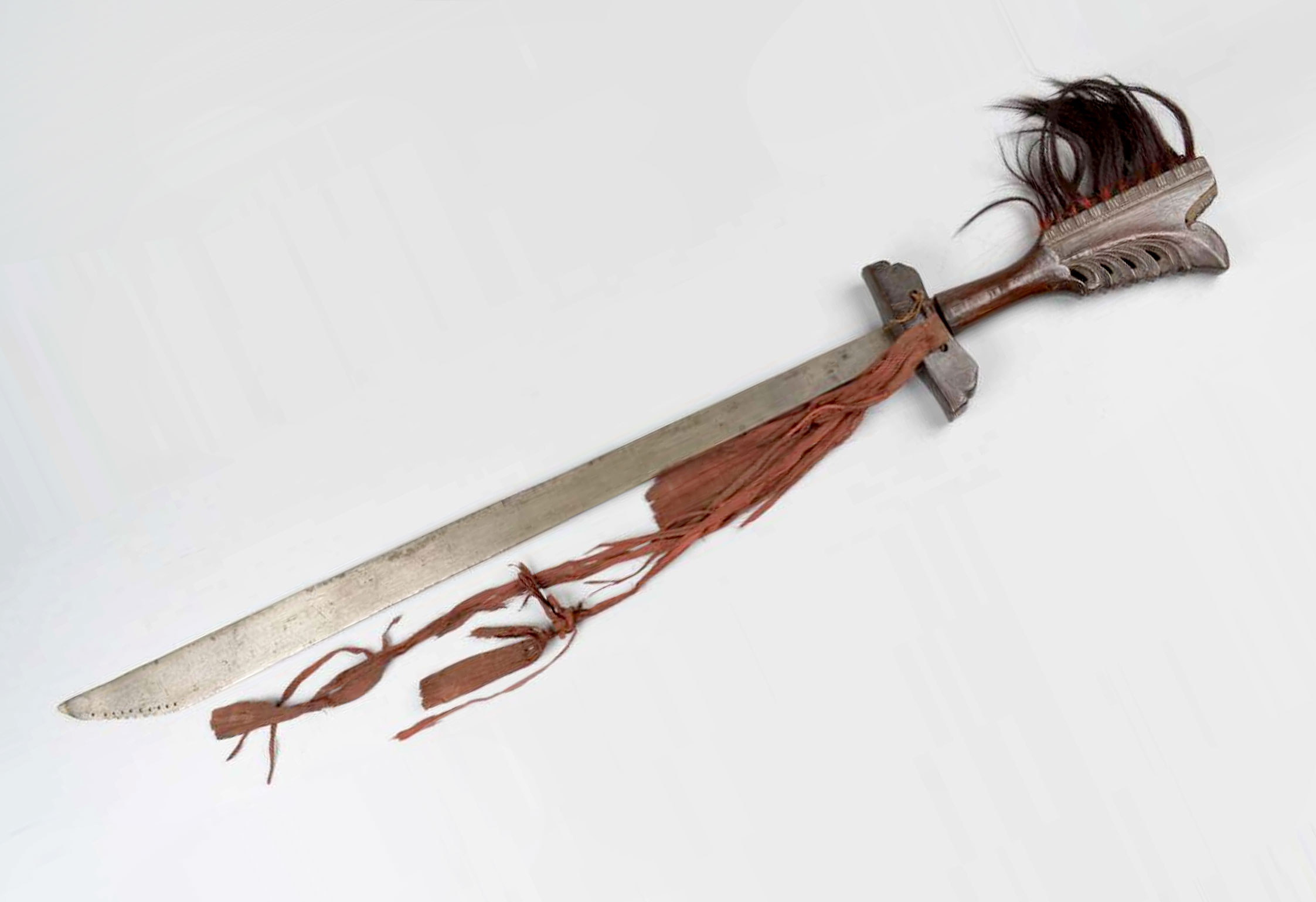 The chronicler Antonio de Pigafetta may or may not have witnessed the actual death of Fernão de Magalhães on Mactan Island, Central Philippines, 500 years ago this following month of April 2021. The Italian writer did however see how the Portuguese navigator was disabled by spears to the arms and face, and a strike to a left leg by a “large cutlass, which resembles a scimitar, only being larger.”


“Then, trying to lay hand on sword, [Magalhães] could draw it out but halfway, because he had been wounded in the arm with a bamboo spear. When the natives saw that, they all hurled themselves upon him. One of them wounded him on the left leg with a large cutlass, which resembles a scimitar, only being larger. That caused the captain to fall face downward, when immediately they rushed upon him with iron and bamboo spears and with their cutlasses, until they killed our mirror, our light, our comfort, and our true guide.”


Noting the irony that this early 19th century Ambrosanian version in Italian is not the original Italian of the writer himself —the very first printed version of the Pigafetta account was in in French, the 1524 Le voyage et navigation, which was then translated into Italian in Il Viaggio fatto dagli Spagnivoli (1536, probably Venice)1 — slippages here and there amongst the many translated texts are unsurprising. The presumably either Italian or French original manuscript has not surfaced; and, for example, that 1524 Relazione del primo viaggio intorno al mondo writes:

“When they saw this, they all came upon him: one with a large terciado (which is like a scimitar, but bigger), gave them a wound in the left leg, which which he fell with his face forward.” 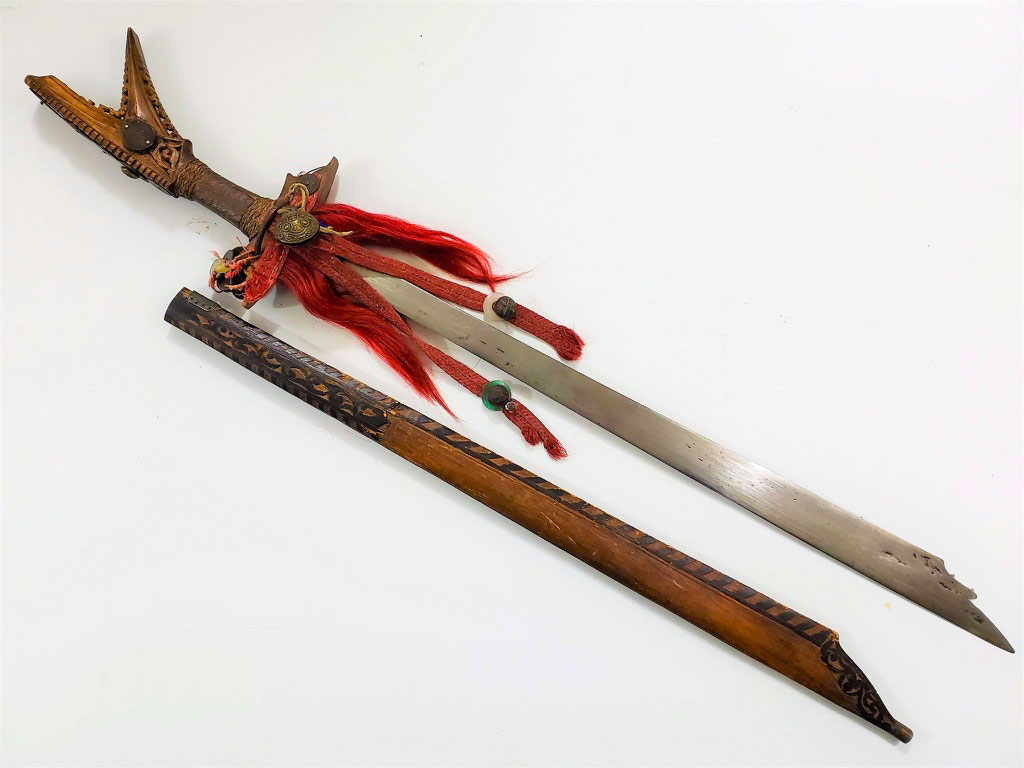 This kampilan is regarded by its owner, the Filipino-American Philippine weapons collector par excellence Ron Zambarrano, as extraordinarily valuable. The original Tausug owner provided it, first of all, with a rare scabbard with painted and light relief ukkil on both sides, nearly the exact shape of the blade... 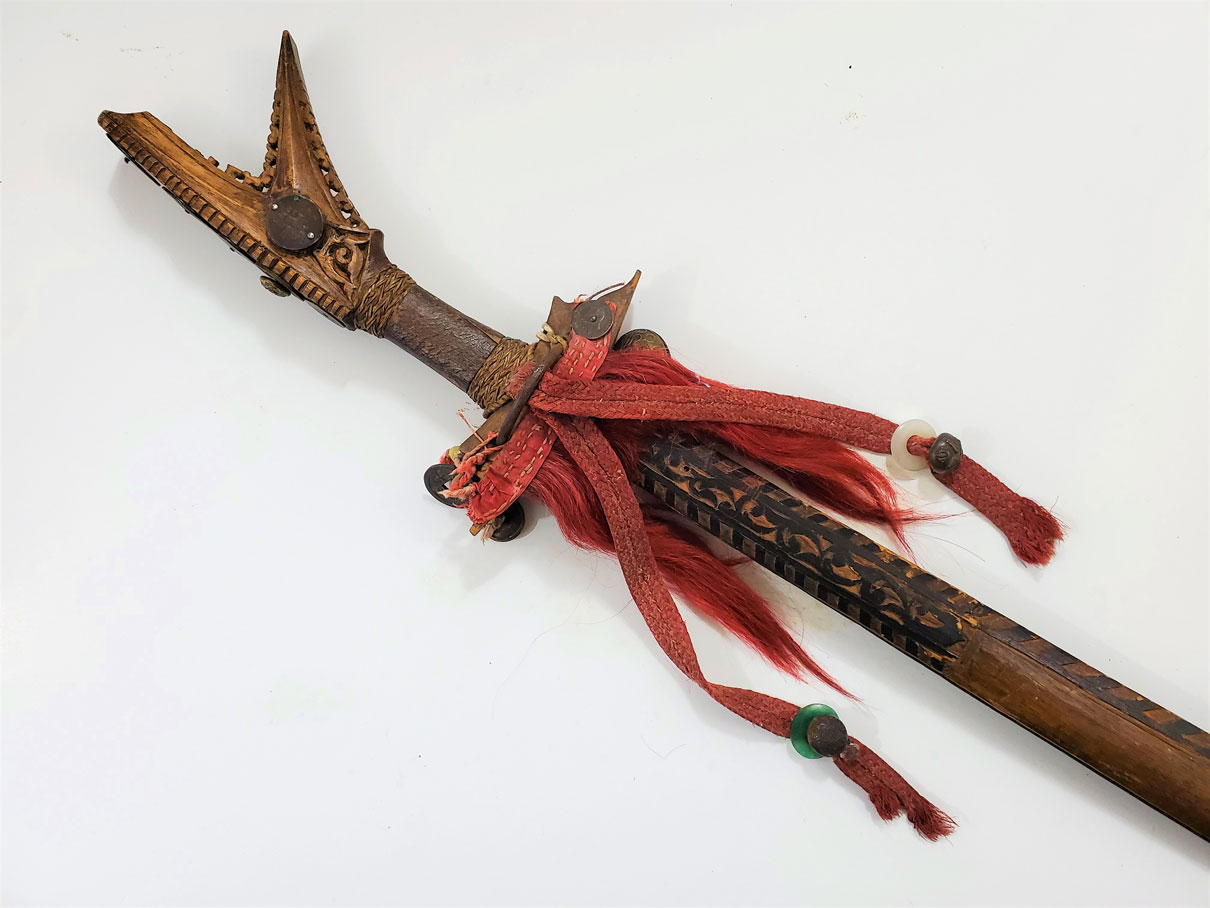 The details are a carefully arranged accumulation of coins of various realms and periods. The hair was, as Zambarrano points out, “was sewed on a piece of cloth and tacked on the front of the handle, giving it a beard as oppose to the ‘mohawk’ that we normally see”... 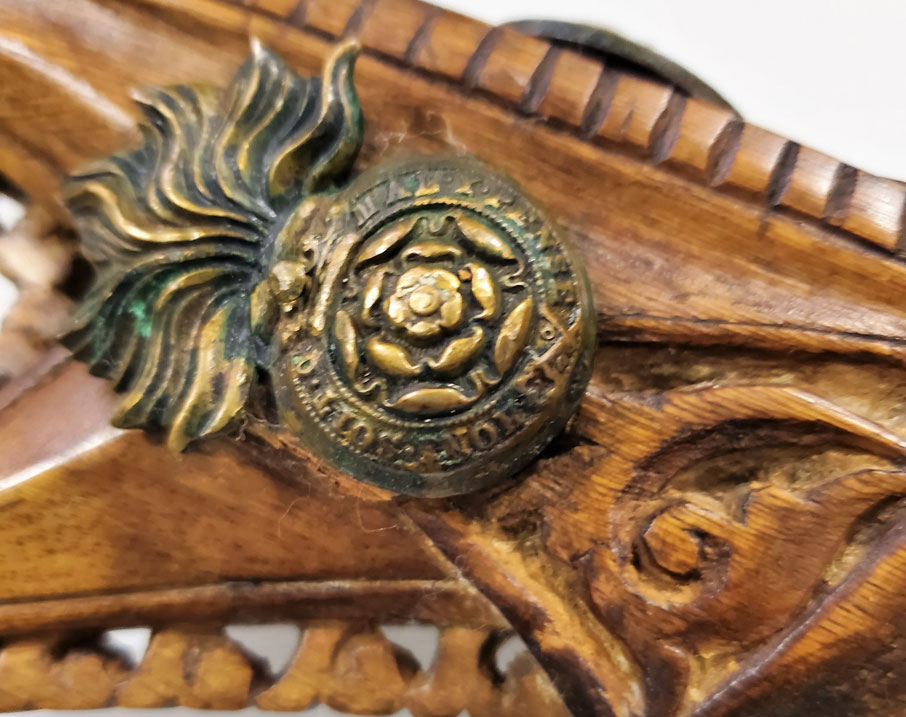 Among the other items that may not be called decoration: tiger bell (original to the kampilan, not added later), Spanish infantry uniform button, Spanish artillery uniform button, a British token or coin, a French medallion or insignia, a coin collection, an aluminium Catholic medallion... 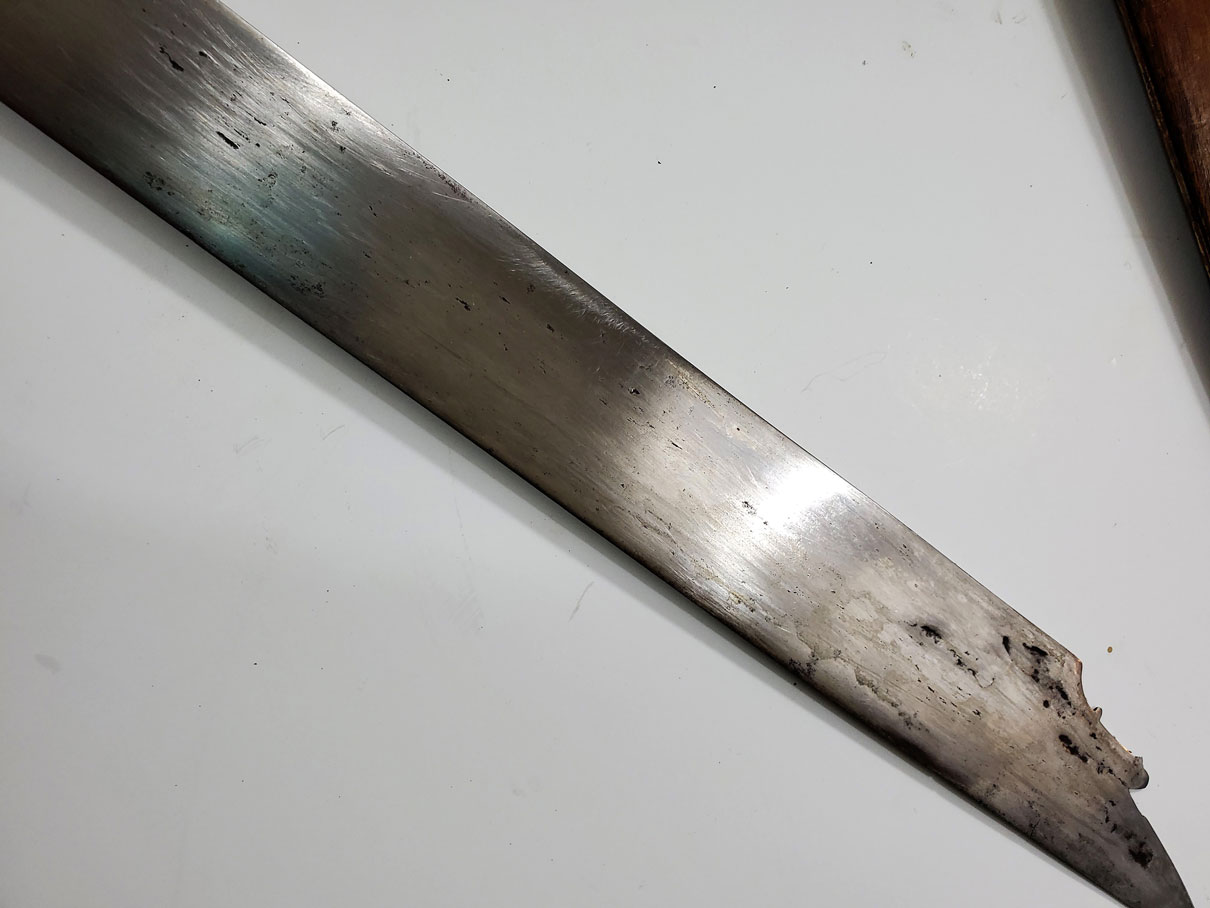 Zambarrano continues: “…the medallion, the front says "St Alphonsus Maria of Ligouri, Pray For Us" and it has his image... 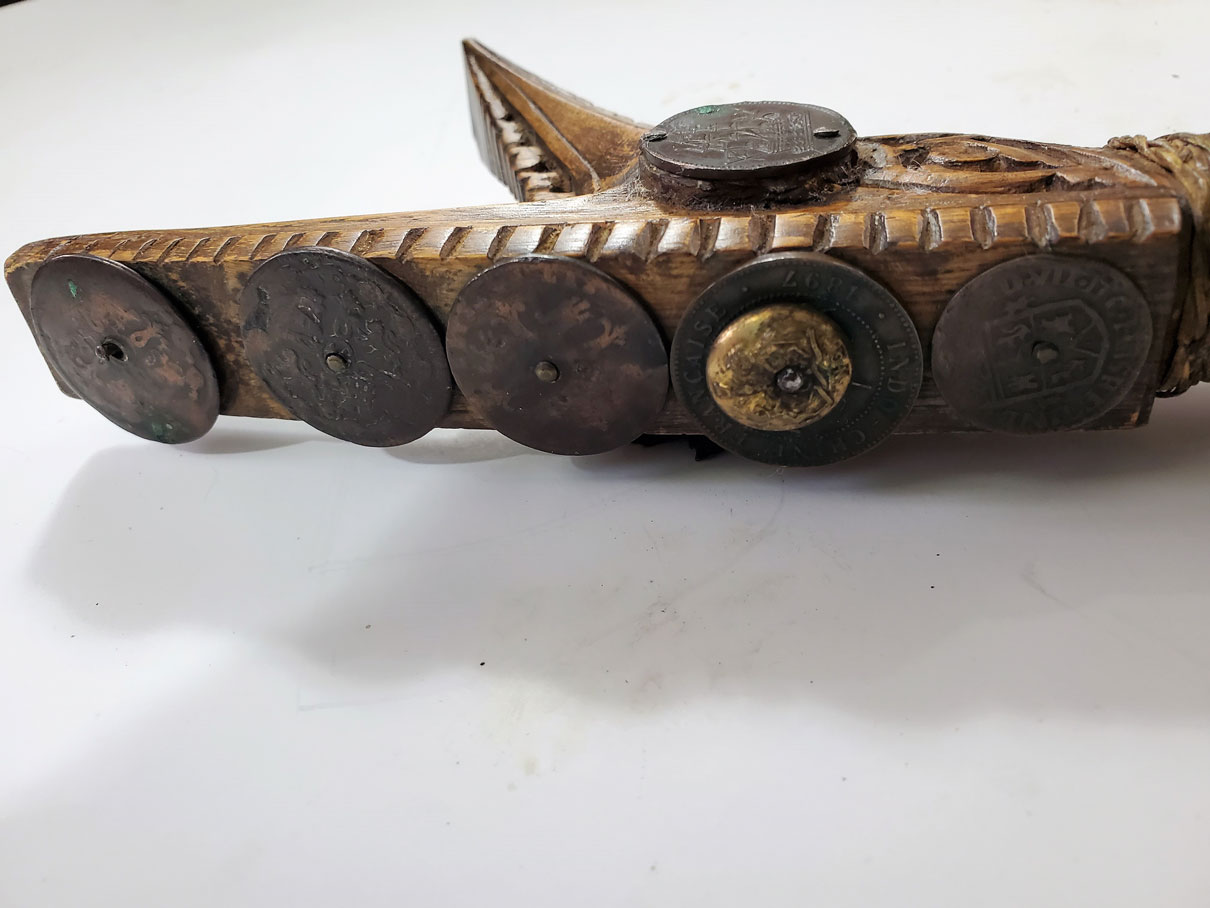 The back says "Our Lady Of Perpetual Help, Pray For Us" with the image of Madonna and Child. (Note that this is a Christian medallion on a Muslim sword)... 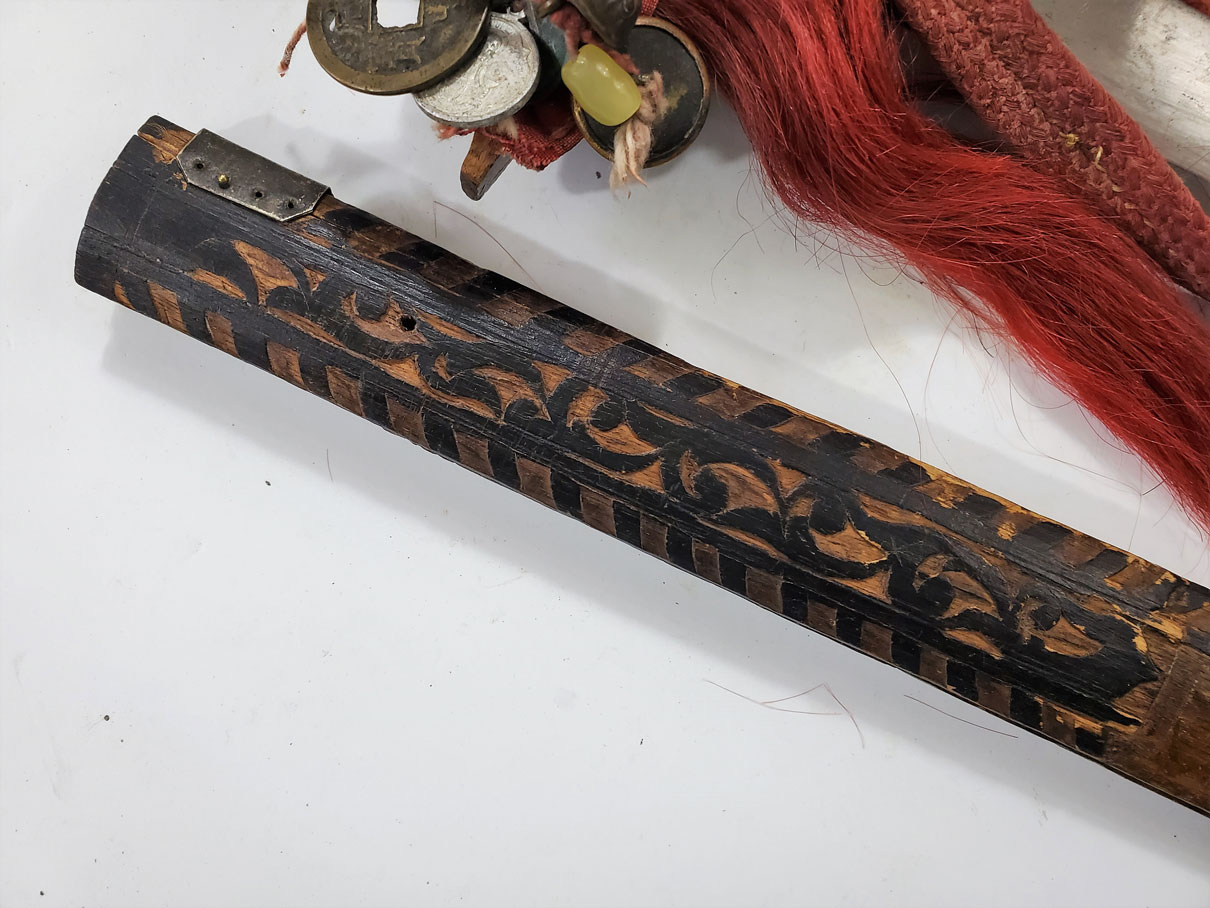 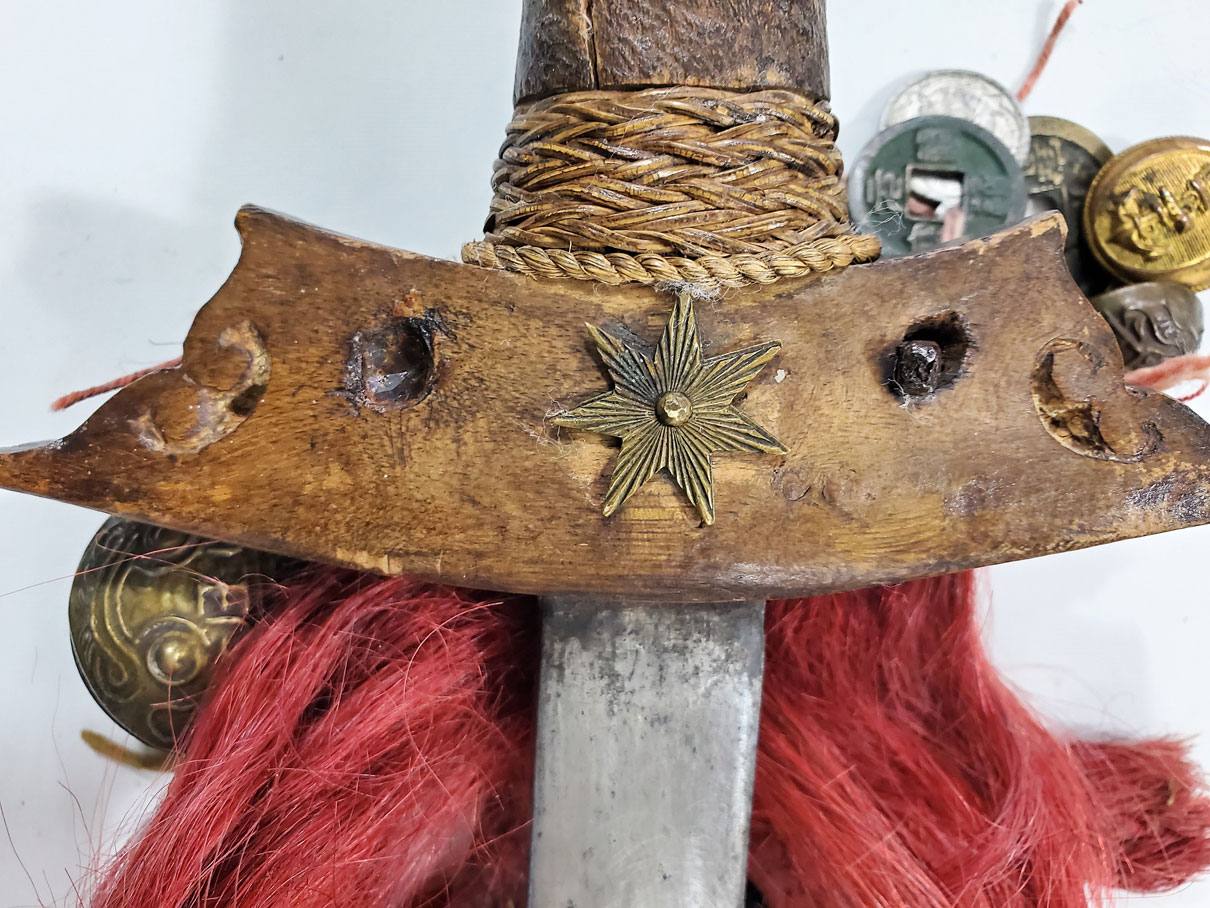 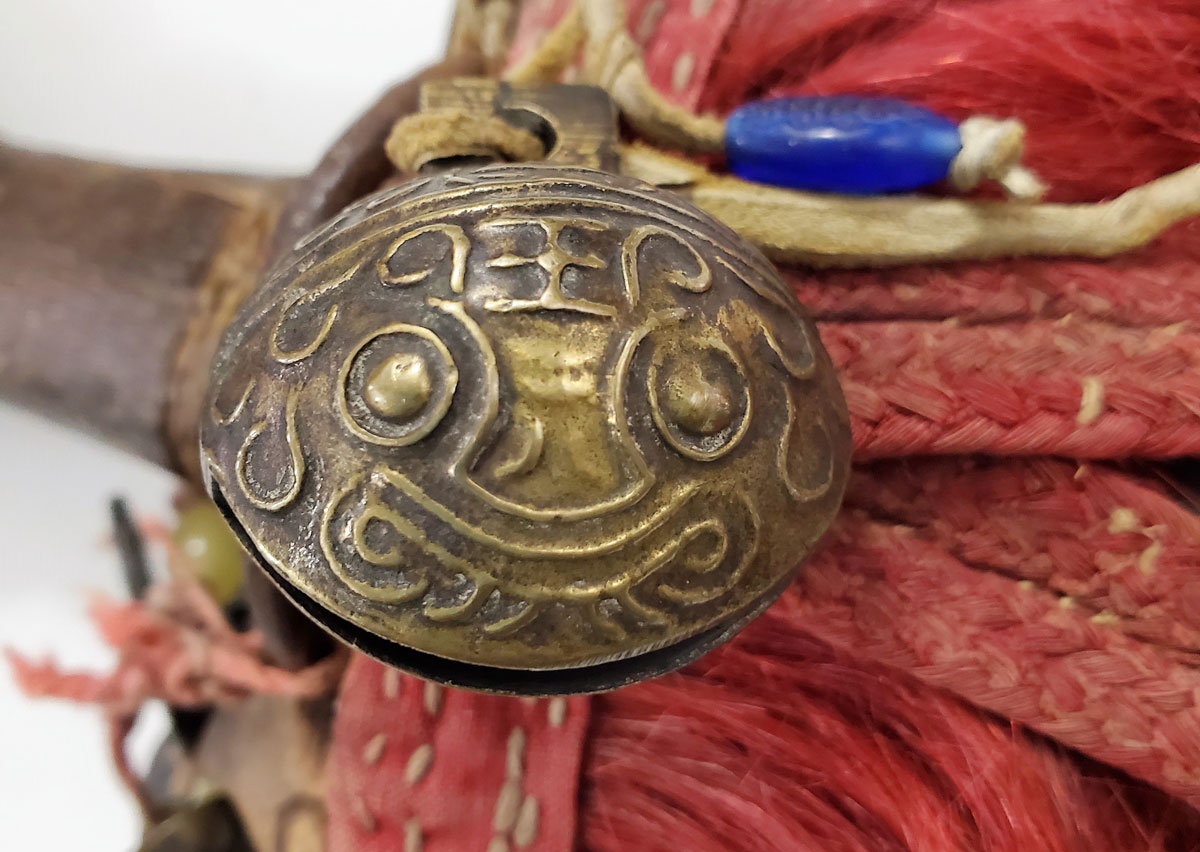 Both were made from copper coin. [Another is] the crowned royal shield with two lions rampant in the upper right and lower left quadrant that first appeared on the coins of Carlos III (reigned 1759-1788)... 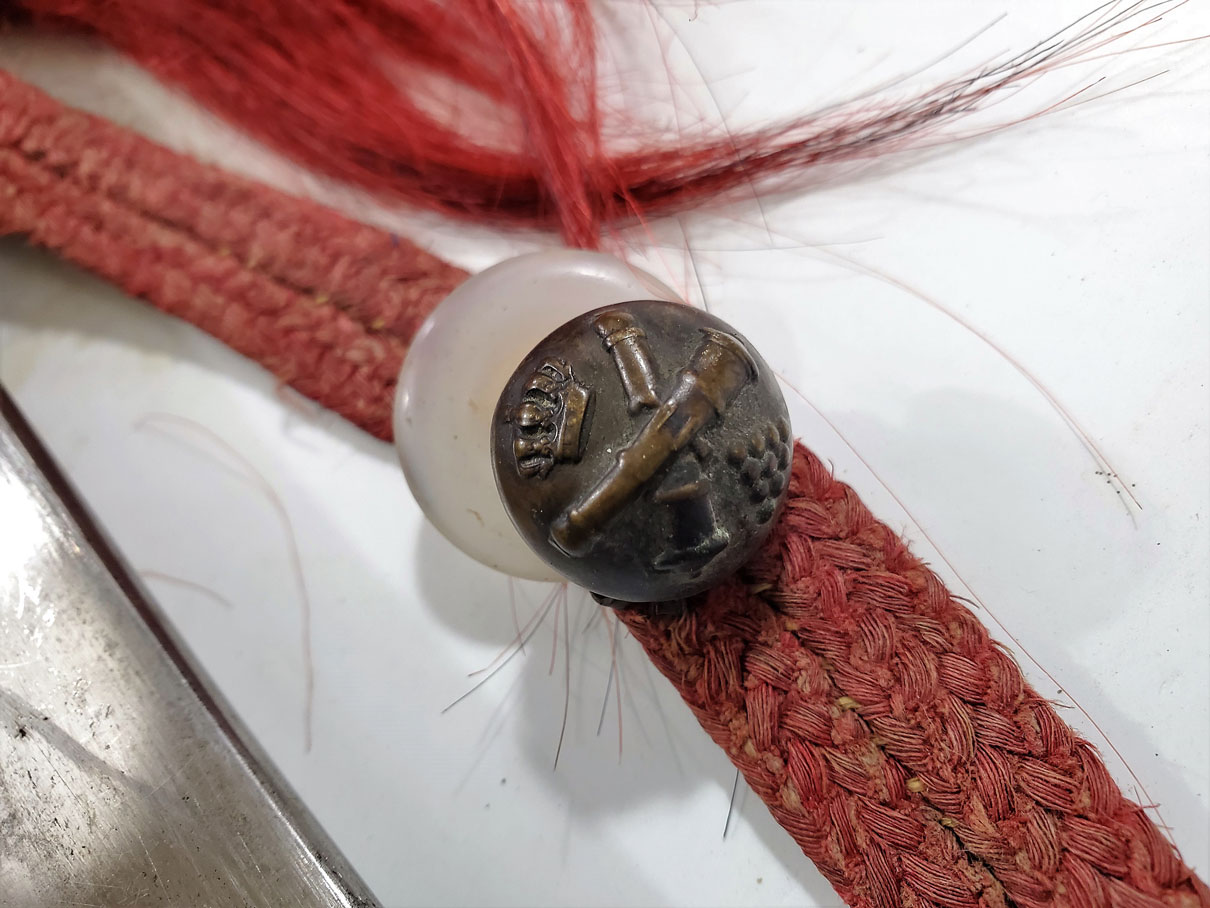 This one could be an 18th C coin. The dates are concentrated around the end of 19th C... 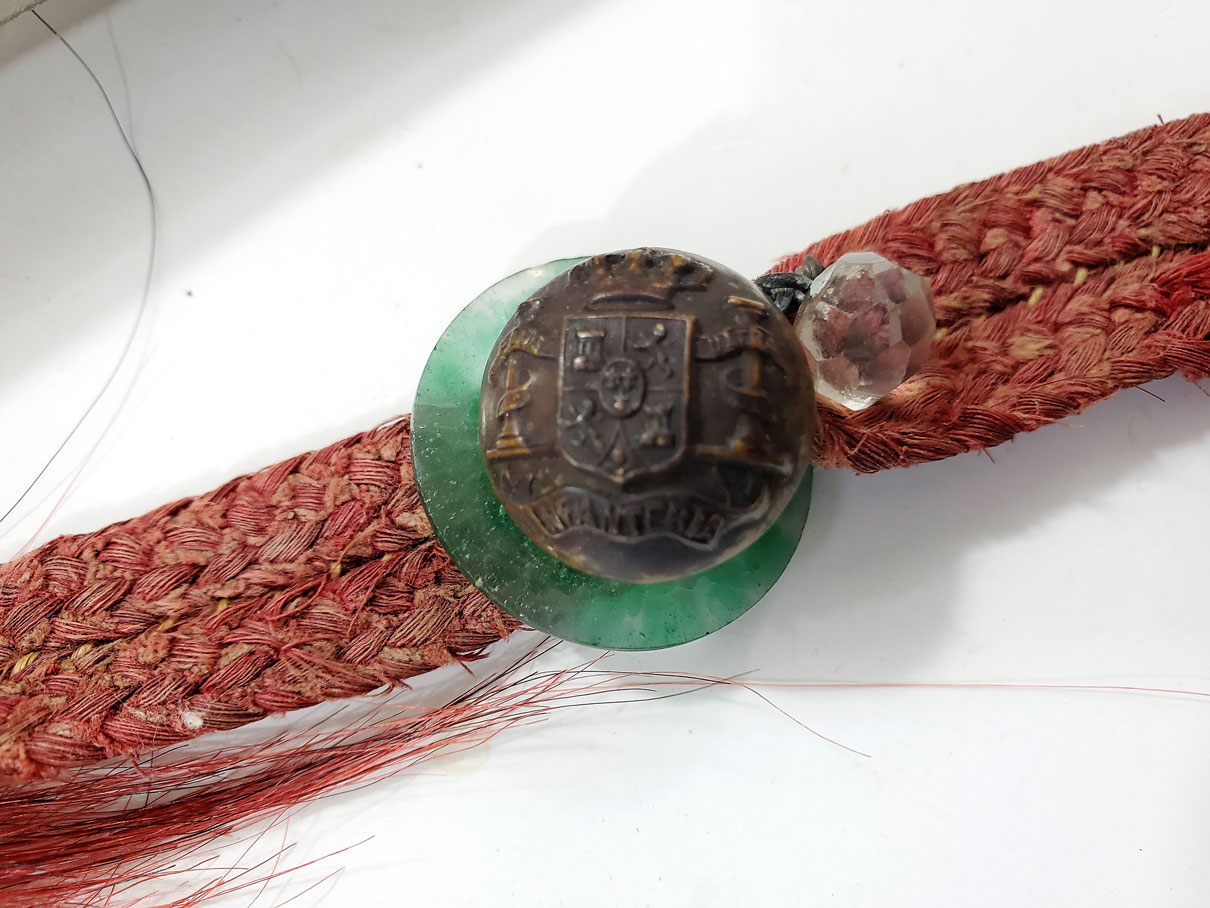 There is no American coin, and it may mean that is a pre 1898 piece…”There is much more to study about this weapon that seems to bring together accumulated wealth and accumulated mystic power. 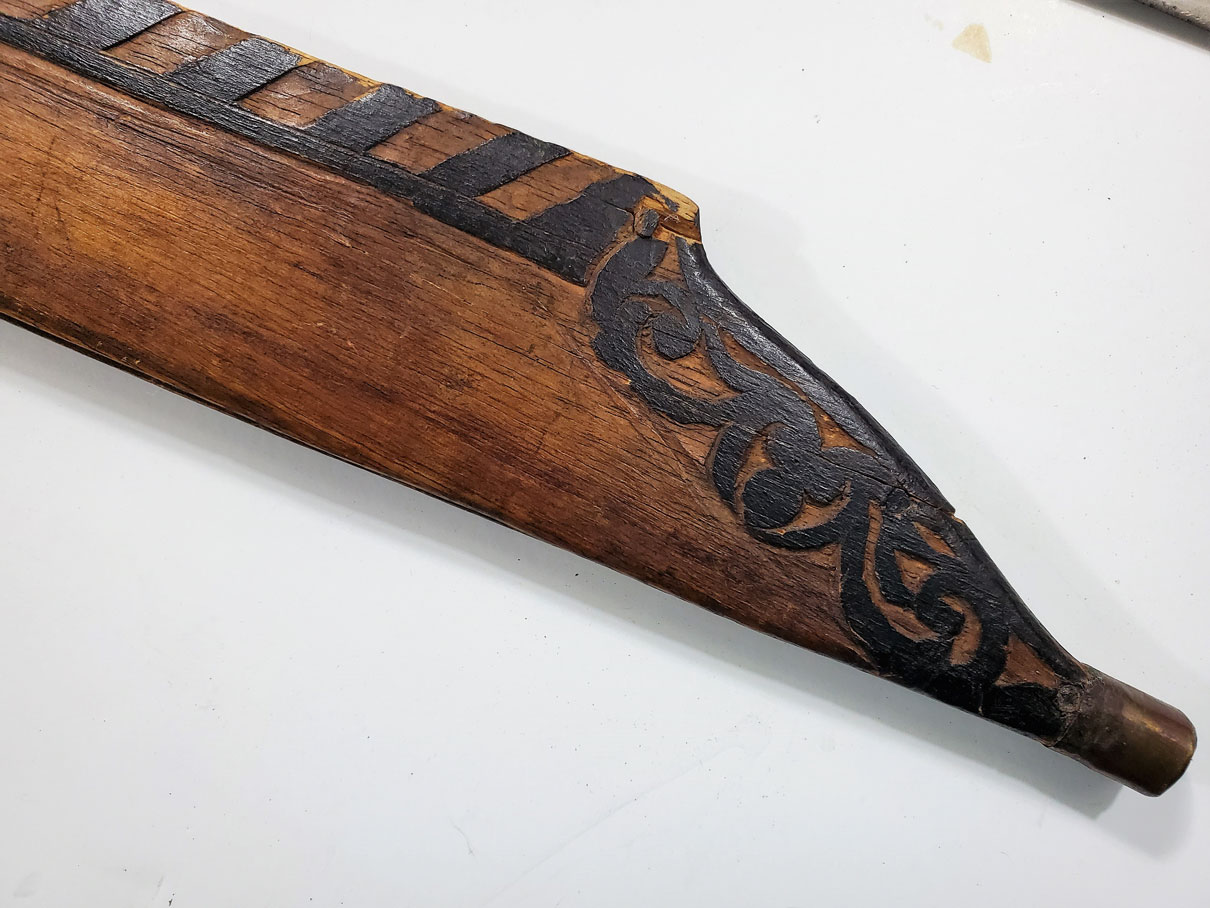 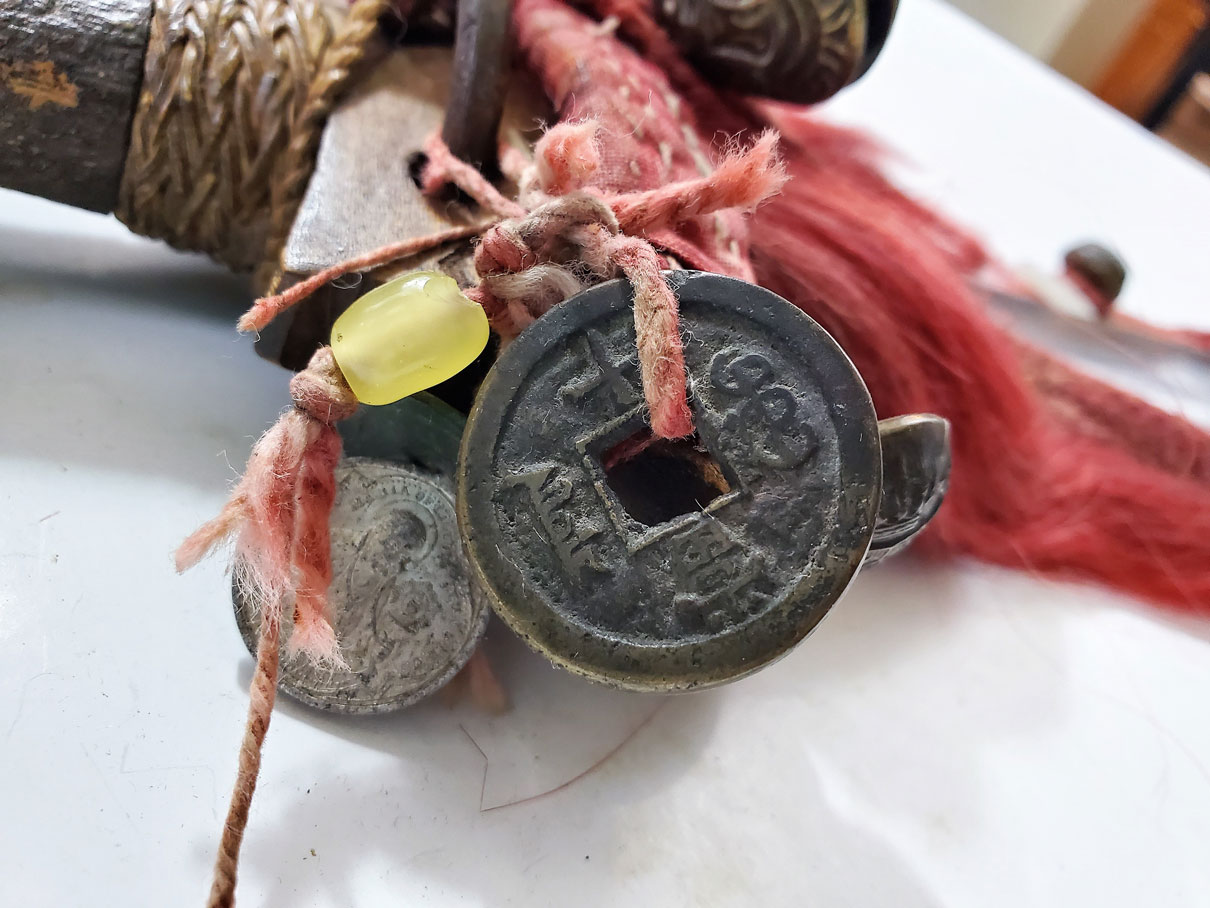 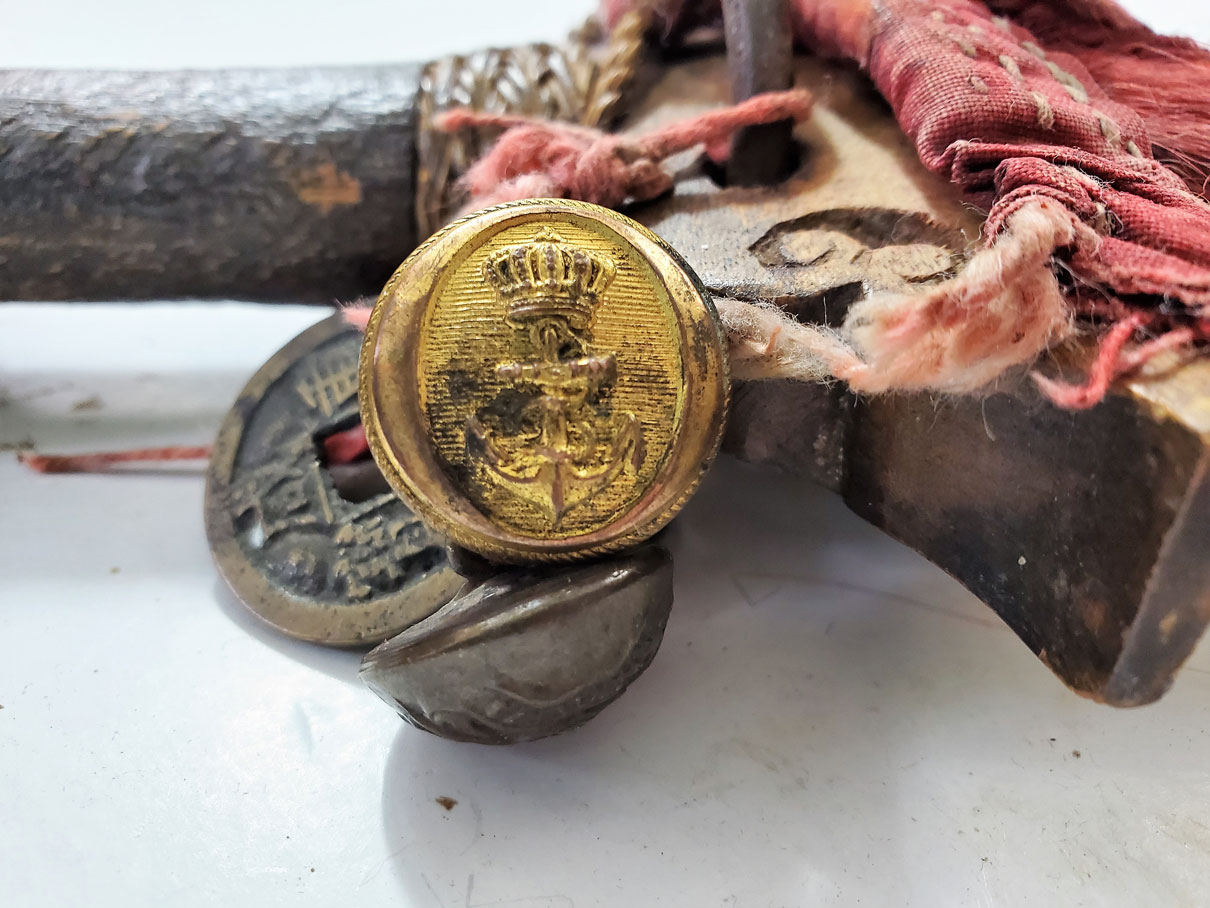 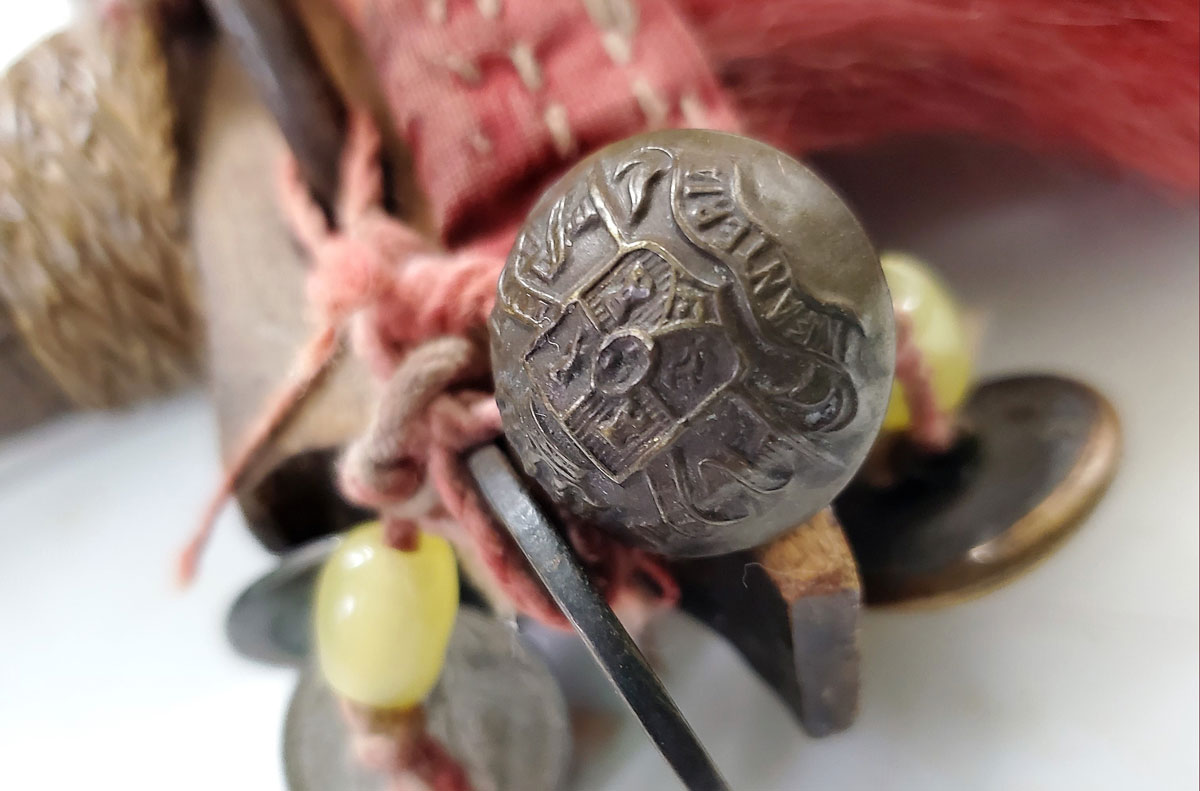 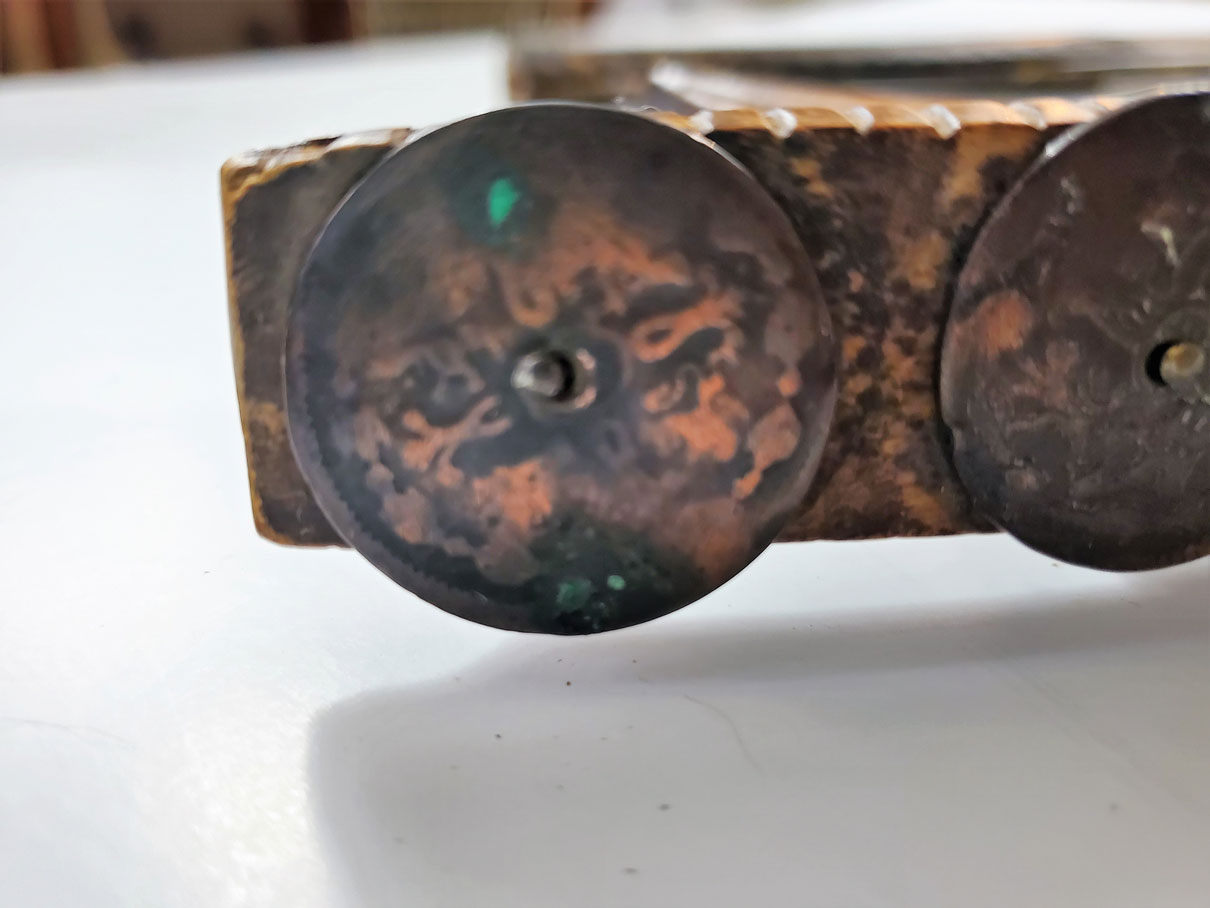 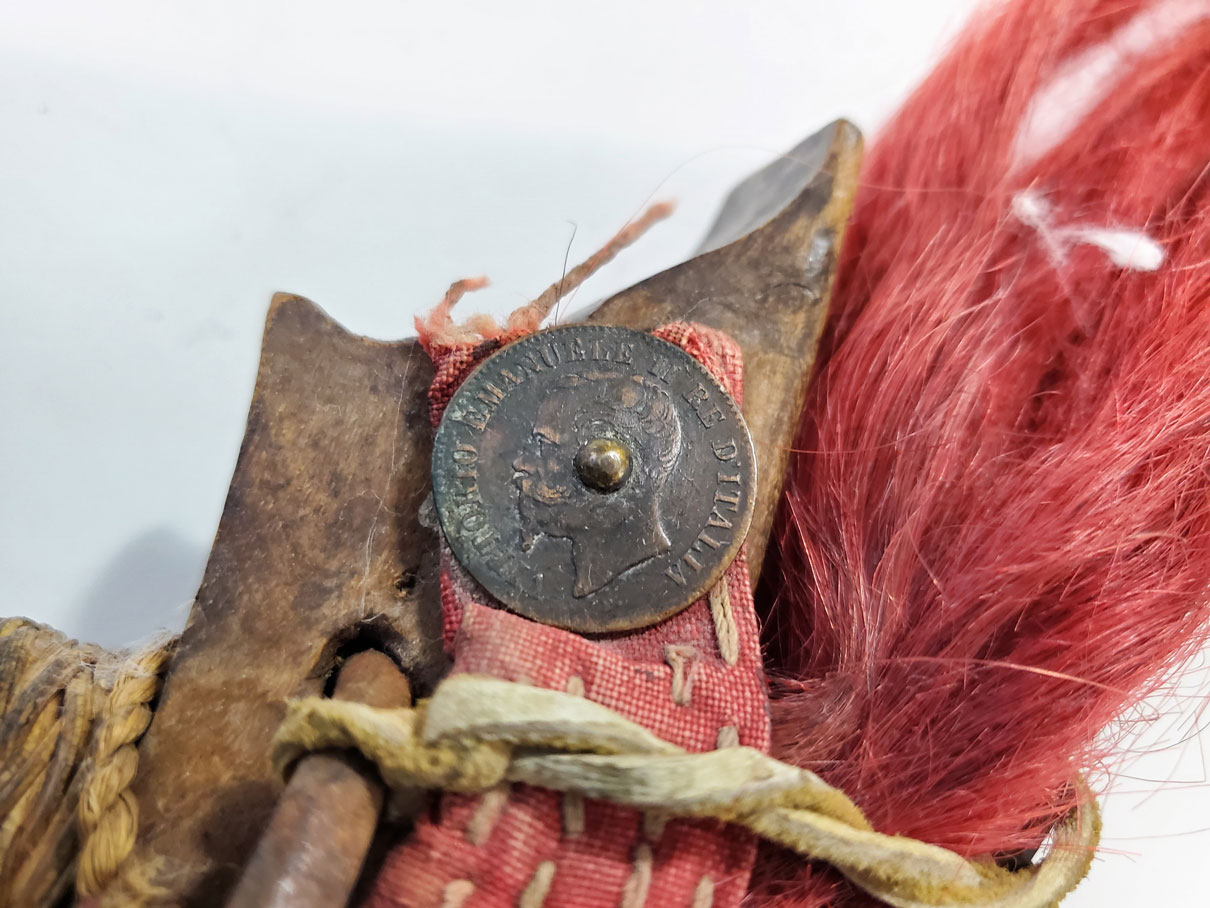 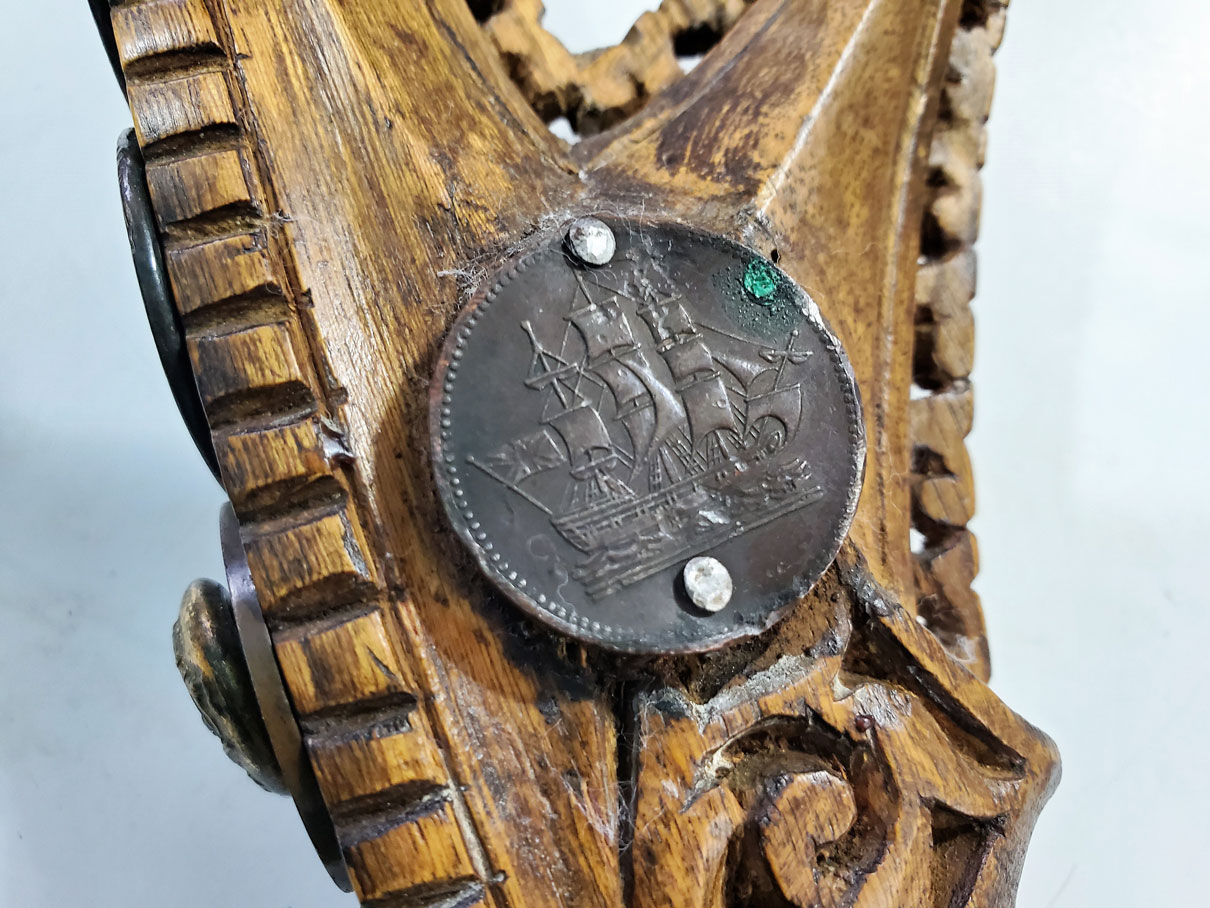 Robertson’s use of the word cutlass in his 1906 translation, and the terciado of the earliest known Italian publication do not exactly refer to the same thing, even if the weapon’s description as scimitar-like carries across 382 years. The lanzas, spears, and arrows everywhere in any edition of Pigafetta’s chronicle have clear reference to weapons still used in combat in the Philippines until the 20th century. But the large blades have passed entirely into the private quarters of aficionados and storages of museums, and it is difficult to pin down exactly what weapon was introduced into the navigator’s gamba sinistra.

And in some translations, the sword is amiss, for instance:

“[The Mactan warriors] threw so many iron pointed spears at us, and shot so many arrows even at the captain himself that we could defend ourselves with difficulty. Finally, having been driven by them quite down to the shore, and while our captain was fighting bravely although wounded in the leg with an arrow, one of those Indians hurled a poisoned bamboo lance into his face which laid him stiff and dead. Then they pressed upon us so closely that we were forced to retire to our boats and to leave the dead body of the captain-general, with our other killed.”

In the Philippines, the missing weapon in the above nevertheless went down in history and popular imagination as the kampilan.

The sword figures in the symbolic world of the Filipino, placed in the hands of LapuLapu, one of the small island Mactan’s two antagonistic chieftains, eventually accorded the status as the first anti-colonial leader during the first day, so to speak, of the Age of Encounter with Europe.

To be precise, the weapon was not in Lapu Lapu’s hand. It was wielded by one of some 1,500 men with him, who charged 49 freshly-minted Spanish allies of Lapu Lapu’s antagonist, the chief Zulu. Having rushed the interlopers’ captain, and felled him, a terciado was used to add damage.

The Spanish word terciado is the most specific of the weapons ID’s in Pigafetta. It appears in that earliest 1524 Italian translation. Here is the definition, in two languages, from a listing of old European weapons.

“Terciado is a sword, saber or machete, late medieval or Renaissance -according to the etymological source that we take-, which was characterized by being, either shorter than a branded sword, -therefore, tertiary: it lacks the last third-, or either a saber or broad cutlass -curved in its last third-.”

A long sword of the Iranun people originally from Mindanao. The horse shaped hilt of this sword is a rare an old variation.. Acquired: 1867. Museum of Ethnography Stockholm

The reference to “third” is to a concept of measure. The sword met in Cebu is shorter by what Pigafetta reckoned was a third of the Spanish late Medieval or Renaissance sword or sable. Or, it was curved in that last third. Relative length was clearly a top-of-mind dimension of worth. However, the dramatic object of the Magalhães demise was like but bigger than a scimitar. Or of the broadsword. The word cutlass appears in the translations into English (which translates into a type in the English weapons typology).

“Terciado” is therefore Pigafetta’s likely shorthand attempt at equivalence with a weapon known to him, which later translators rendered into sable or cutlass, weapons known to the translators — the latter more precisely translated from the Spanish descriptive word, ancho, wide, as a broadsword. Pigafetta also brought in the relative comparison with the scimitar, which is by definition a curved sword, traditionally light and thin, and associated with its Central Asian, hence Eastern, origins. Pigafetta must have seen a curved blade that he thought best to describe in relation to the Western terciado and the Eastern scimitar.

In other words, Pigafetta’s is not exactly a clear description.

A long sword of the Iranun people originally from Mindanao. .Acquired:1921. Museum of Ethnography Stockholm

About the kampilan—the slightly different word and the slightly different forms known in different parts of the Philippines—two things can be said in broad strokes. The kampilan is, collectively, possible to regard as one clear typological form with many variations in different islands of the archipelago, linked to different networks of exchange that modulate an essential concept of a thing. Linguistically, kampilan is also a word that has widespread use for “dedicated fighting blade”, as to Philippine weapons collector and scholar Lorenz Lazco — that may refer to bladed weapons substantially different as to potentially belong to different typologies.

Sword (kampilan). Acquired: 1941. Penn Museum 2
What remains singular about the use of the word kampilan among the Cebuano, Maguindanao, Iranun, Tausug, Tboli, Hiligaynon, Bontoc, Bagobo, Tagalog, Waray, Ivatan, Sama-Bajaw, and so forth, are the presence of a long blade with a single cutting-edge and a flared lateral tip that often ends in a diagonal. The Muslim versions have spikelets at this diagonal tip, opposite the elaborate pommels which, in the Maguindanao case, are massive and triangulate; and in the Iranun and Tausug case, an “open-mouthed” V-shaped. The latter are associated with crocodile symbolic references.

Following Pigafetta, the Cebuano kampilan was curved — the basis of its similarity to the scimitar, the Eastern weapon that would have been familiar to a Venetian man of letters of the early 16th century, who would have known of the material culture of 800 years of Islamic Spain and Maroc during the Medieval. Like the swords called kampilan elsewhere in the archipelago, this Cebuano version would have been longer than other forms of blades such as, for instance, used in agriculture, or in close-in killing.

What the existence of fine bladed weapons in the Philippines for centuries beg is the question of who made them. Excellent smiths, of course, the pandáy who made kampilans and other bladed weapons for individual warriors. That is to say, for individual bodies, because the weapon is prosthesis, an extension of the wearer’s physicality. And in this focus on the smith is the threshold to what really has to be known about the kampilan in all its variety and other Philippine weapons.

Sword (kampilan) made of gold-inlaid steel with ivory hilt; blade engraved on one side with the name of the maker, Isma‘il,. Acquired: 1954. British Museum

The pandáy was an artist who made weapons for persons, not armies. Nothing was standardized in the Philippine archipelago. Examination of extant antique works of the pandáy, in museums and collections all over the world, shows exquisite detailing matching the lethal ergonomics of the make. Both the efficiency embodied in the metallurgy and the personality-oriented detailing—plus deeply shared concepts of mysticism between maker and user—speak of an interpersonal and inter-talismanic bond of overlarge proportions.

And it is this world that the clueless Magalhães stumbled into, when he thought to intervene in internecine village contests, presumably in heavy Iberian body armour, well into Mactan beyond the reach of cannon on ships. The swarm of spear and bow-and-arrow wielding, tattooed warriors, among whom is the kampilan-holding individual who gets to deliver the coup de gras, were most certainly possessed of individualized martial artistry and, in their Hindu-flavored Austronesian view, mystic powers. 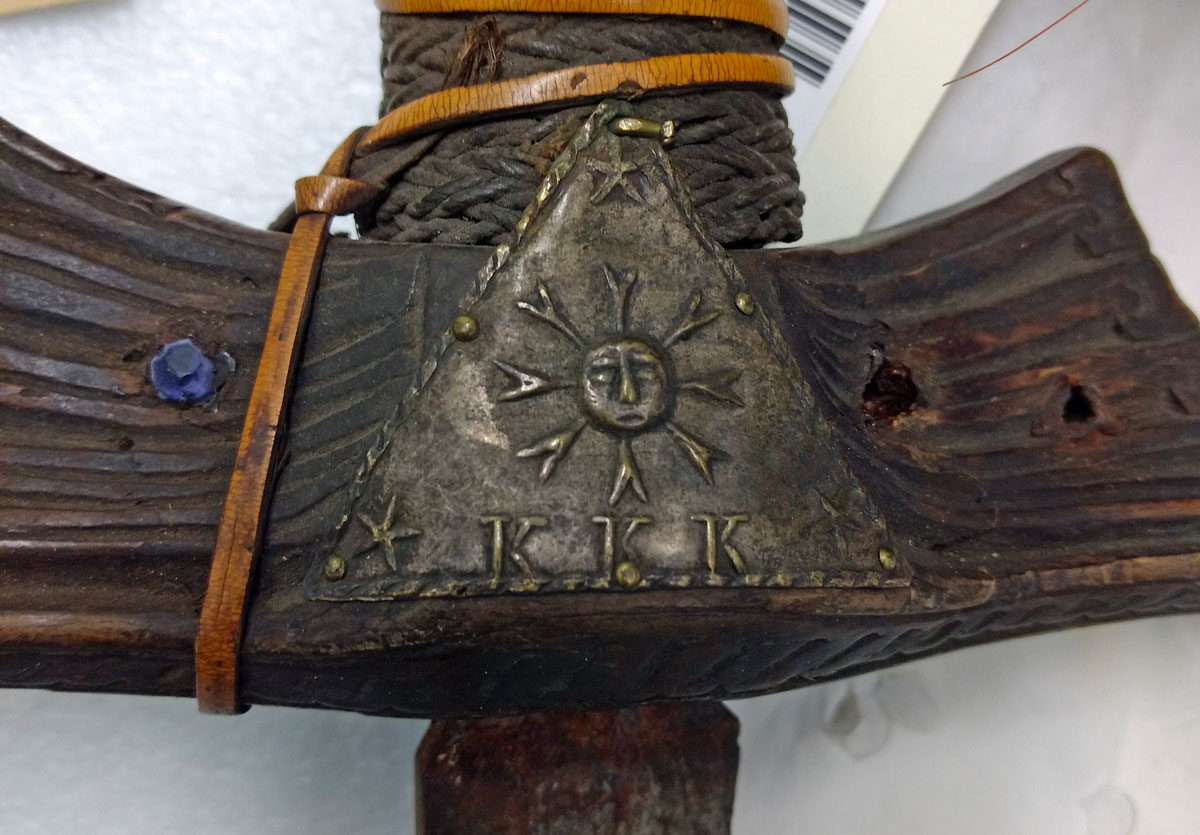 A Kampilan with an emblem of the KKK on the sword handle. Acquired: in 1931. Catalog Number E361653-0. Department of Anthropology, Smithsonian Institution
Unlike soldiers in an army in the services of kings and potentates, who have to follow a battle plan, the peoples of what became las islas filipinas lived and died on the basis of individual prowess, both physical and spiritual. The kampilan to be explored are among their most mystical weapons.

Only 50 years after the skirmish in Mactan, denizens of the archipelago were to submit quickly to the weapons and mind-bending skills of the men of the Spanish realm who came around to take profits in lucre and souls. But it is becoming clear to scholars and Philippine martial arts enthusiasts, that while weapons like the kampilan became obscure except in Islamic Philippines, martial arts techniques and lore survive.

Sword made of metal, wood, hair.
2

From card: "Scabbard ferruled with brass and silver; pommel tufted with horsehair. According to Mr. Ricardo B. Marasigan, Philippine Embassy, Wash., D.C., the sword, # 361,653, is a particularly important specimen because of the emblem in brass…
3

Sword made of iron, wood, hair. (Annotation March 2021. Identified as a Kampilan by Lorenz Lasco and Corazon Alvina)