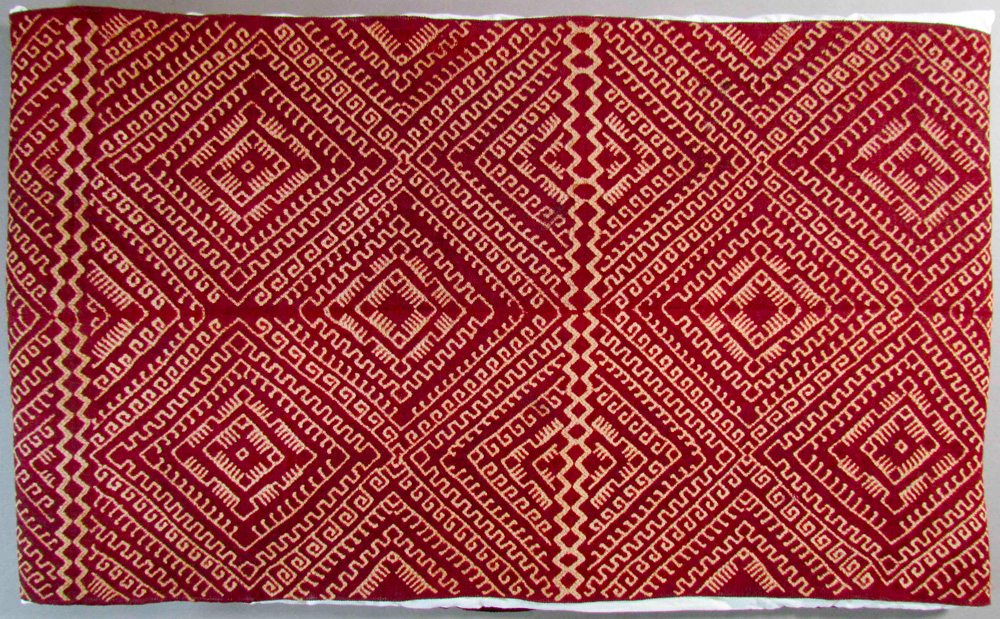 The Javanese 'batík' — the word and cloth that travel well globally, for textiles whose intensely-wrought patterning is executed by either block-stamping with hot wax or drawing with a hot wax-dispensing, pen-like instrument — is verily an Indonesian flag.

Still, the word 'batík’ belongs to greater island Southeast Asia. It is the same word, batëk, or batók, everywhere in the Philippines for tattoo. Batík is speck. Batík -batík is spotted, spotty, marked with dots. 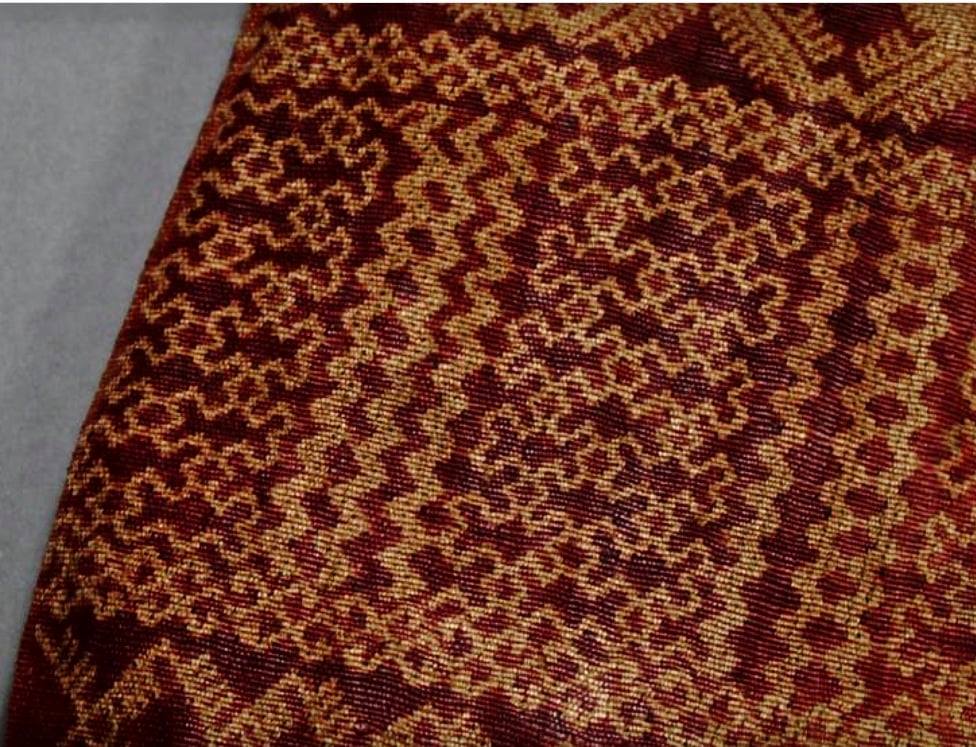 Detail of tritik dyed fabric. Note the needle marks where the embroidery was, prior to dyeing. Penn Museum. Materials: Abaca and Glass [beads]. Native Name: Saruar. Origin: Bagobo, Davao, Mindanao. Acquisition Date: 1914. Acquisition Type: Purchase from Misses Elizabeth H. Metcalf and Sarah S. Metcalf
In Bahasa Indonesia and Pilipino, titik is spot or dot. In Pilipino, titik is the written character; the letter of a syllabary. Titik exists in both these invented national languages, because it is a widely shared word across the two archipelagos, conveying similar meanings.

-tik or, indeed, -tëk brings up an onomatopoeic idea of pagtitiktík, to tap lightly. Exactly how a tattoo would be done, particularly with thorns. Or how a bird’s beak raps against a tree.

‘Batikán’ (in Tagalog), or batíkan (in Cebuano) which today says ‘veteran’ or ‘famous person’— earlier it signified a heroic character — would have been a tattooed person. Indeed an impressively tattooed person.

Batik, batok, batëk belong to a tight cluster of meanings around the notion of marking, both verb and noun. ‘Markado’, the Hispanicized colloquialism for tattooed person, brings the idea to today, however losing the sound reference of -tik, or tiktik (which for some reason is also the modern word for ‘spy’.

Tritik-dyed upper garment and trousers for male use. Fowler Museum of Art. Date: 19th to early 20th century. Origin: Bagobo; Mindanao.
Tritik, another Javanese word, has been taken up by the global community of textile scholars and aficionados, to refer to two procedures which, like batik, produces the effect of reserving the original color of thread while the rest of the cloth is dyed. Tritik is either the process of making small running stitches to tightly gather a woven cloth, or of embroidering cloth —both involving waxed thread — to reserve or resist dye in sections as pre-planned by the artist.

Tritik obliges the dyer/embroiderer to cut or otherwise destroy perfectly well-executed embroidery after dyeing, to reveal the un-dyed sections beneath. 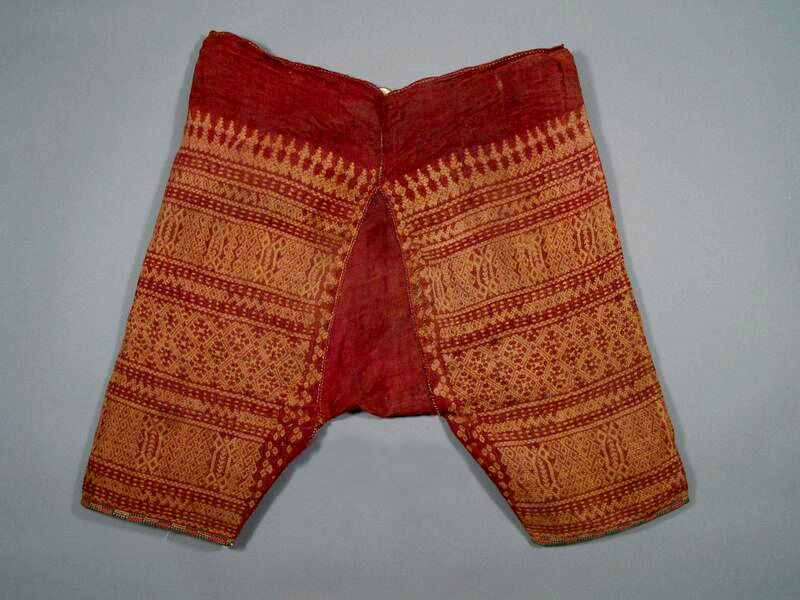 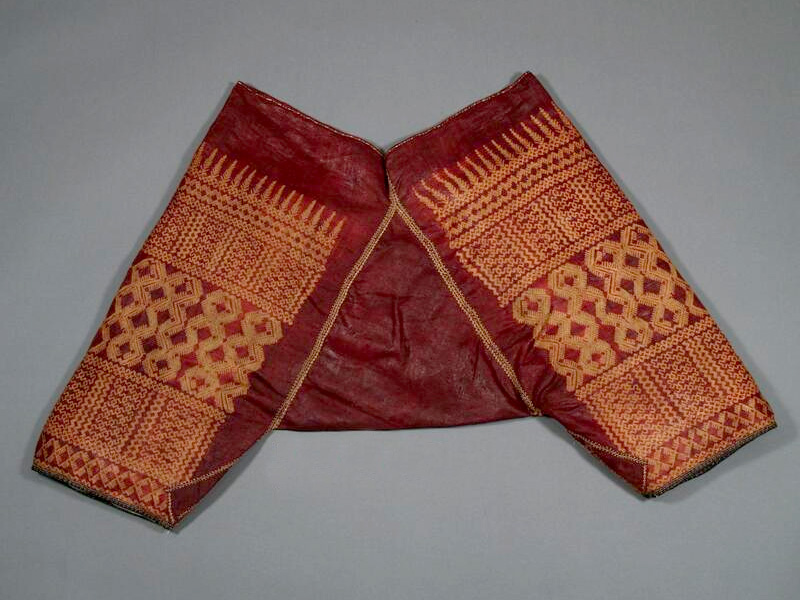 Tritik-dyed men's trousers.Penn Museum. Materials: Abaca and Glass [beads]. Native Name: Saruar. Origin: Bagobo; Mindanao. Acquisition Date: 1914. Acquisition Type: Purchase from Misses Elizabeth H. Metcalf and Sarah S. Metcalf
In the Philippines, tritik was only executed via embroidery using waxed abaka threads on abaka cloth. It is uncertain how many and precisely which southern and eastern Mindanao ethnolinguistic groups practiced the art, because most of the extant examples from about a century ago, in museums in Europe and the United States, credit the practice to the Bagobo.

Such categories of art were never widely known; nor who made what, necessarily clear. José Rizal only bracketed as Mindanao, a number of articles he collected and which were subsequently acquired 1880 by the Ethnologisches Museum (Museum für Volkenkünde), Staatliche Museen zu Berlin, Germany. 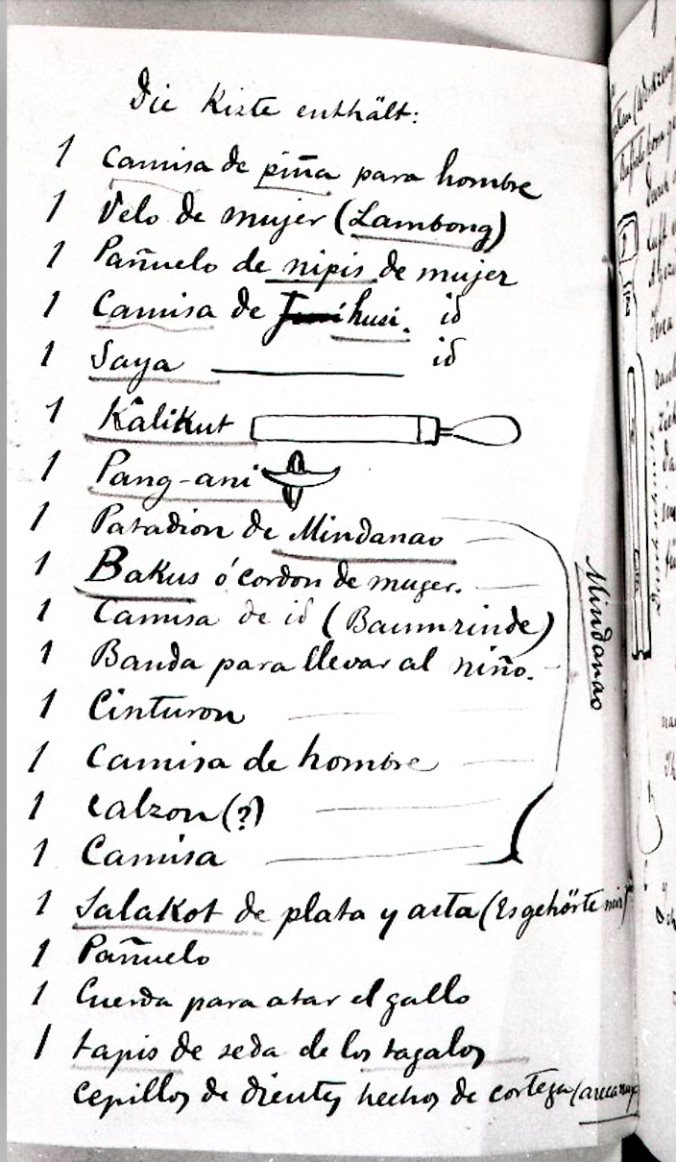 Photograph of Jose Rizal's list of items donated in 1888 to the Ethnologisches Museum, Staatliche Museen zu Berlin, Germany. Among the items bracketed as Mindanao in origin is the piece "banda para llevar al nino" -- with no further indication of originating culture. Photo Credit: Ambeth Ocampo
Of these pieces, one is completely tritik-dyed (and another is a combination of tritik and plangi). Rizal wrote that this piece was a “Banda para llevar al niño”, cloth for carrying an infant. It is the only existing such piece—a cloth with specific patterning for carrying infants, and tritik-dyed — known to scholars.

Tritik pieces credited to the Bagobo reside in the collections storages of the Museum of Anthropology and Archaeology of University of Pennsylvania; the Fowler Museum of the University of California in Los Angeles; the American Museum of Natural History, New York City, among other American museums. The Museum für Volkenkünde of Leiden University, the Netherlands, aside of that in Berlin, Germany, are among the European museums that own Mindanao tritik pieces. A few pieces are owned by a handful of private collectors in the Philippines.

Rizal was accepted into the Royal Anthropological Society of Berlin in the 1880’s, when this piece was acquisitioned into the city’s ethnographic museum. The 19th century intellectual as scientific collector was inaugurated as Filipino in this passage of these materials to the museum.

Rizal is the ancestral figure to a long line of Filipino aesthetes-scientists-humanists who imagine nation, among other modern imperatives, as people available to study—the less studied, the better. Indeed Rizal himself mused about offering his brain for study to the Royal Society. 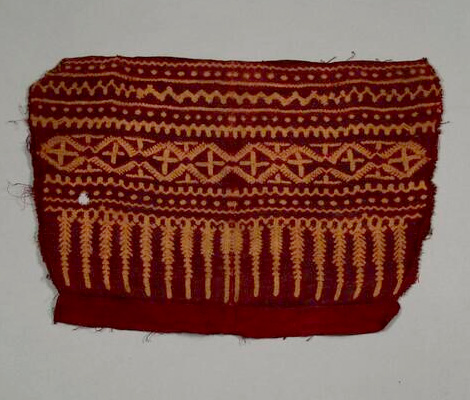 One sleeve of an upper garment. Penn Museum. Origin: Bagobo; Mindanao. Acquisition Date: 1914. Acquisition Type: Purchase from Misses Elizabeth H. Metcalf and Sarah S. Metcalf
Collecting is of course the sine qua non of scientific inquiry that flourished in the 19th century. Ethical positions are infinitely more difficult to figure at the start of the 21st century, towards collecting and in fact towards the motivations of scientific inquiry. The case of the utterly rare tritik piece that Rizal’s sharp eye spotted, encourages some thought about the balance of dismembering and re-membering. Science seeks details to construct macro frameworks. Re-membering does that, too, in the wake of scientific collecting that has unfortunately, through time, facilitated the avarice of markets in exotica.

The Filipino, a creature born at the end of the 19th century as modern, is only now beginning to palpate archaic notions of marking (-tik) on bodies (batek) and clothing (tritik). Such inquiries are complicated by the widespread use of the word budbud or bëbëd for all reserve dyeing processes. Nevertheless it should be safe to indulge a happy conjecture: that, sans writing, Philippine peoples construed these body and cloth marks as a system of meaning.

"Banda para llevar al niño" (cloth for carrying an infant). Label copied from the packing list that Jose Rizal sent with the box of items he was donating to according to the notes of José Rizal, who collected the piece and donated it in…
2

Tritik-dyed upper garment and pants for male use
4