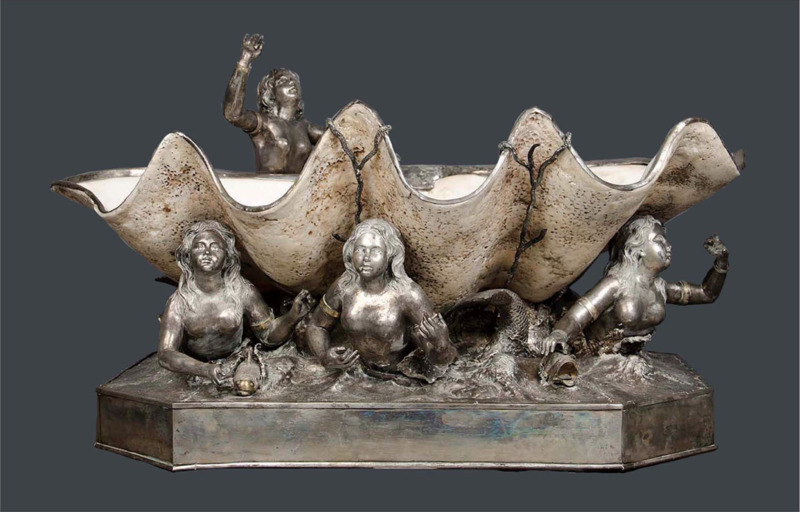 Punchbowl made with a Taclobo clam, silver mounted base. Owner and Photo credit: Department of Invertebrate Zoology at the Smithsonian Institution's National Museum of Natural History Acc # USNM 1454928

When a 33-piece silver-plated serving set was recently discovered in the storage rooms of the Smithsonian Institution Museum, a less considered angle to the cultural construction of the Philippines by the Americans at the Louisiana Purchase Exposition of 1904 came to light. At this event, also known as the St. Louis Fair, the Philippine Islands was introduced as one of the newest possessions of the United States. The Philippine Reservation was the largest exhibit at the fair (Newel, 5128).

In St. Louis, the living displays of “the savage tribes” in reconstructed villages understandably gained more attention than the artwork produced by colonized Filipinos. Many of the more academically-trained artists were made to represent a civilizational index that was included in the exhibits. In contrast to the artefacts from the non-christianized ethno-linguistic "tribes," the objects that exhibited mastery of western technique would show "guild-like" manufacturing potential. At the same time, the motifs prevalent in the decorative arts that were displayed would promote a colony that was rich in natural resources and a ready source of labour. In a real sense, the Philippine exposition served both its civilizational mission as well as the economic and political goals of colonization. 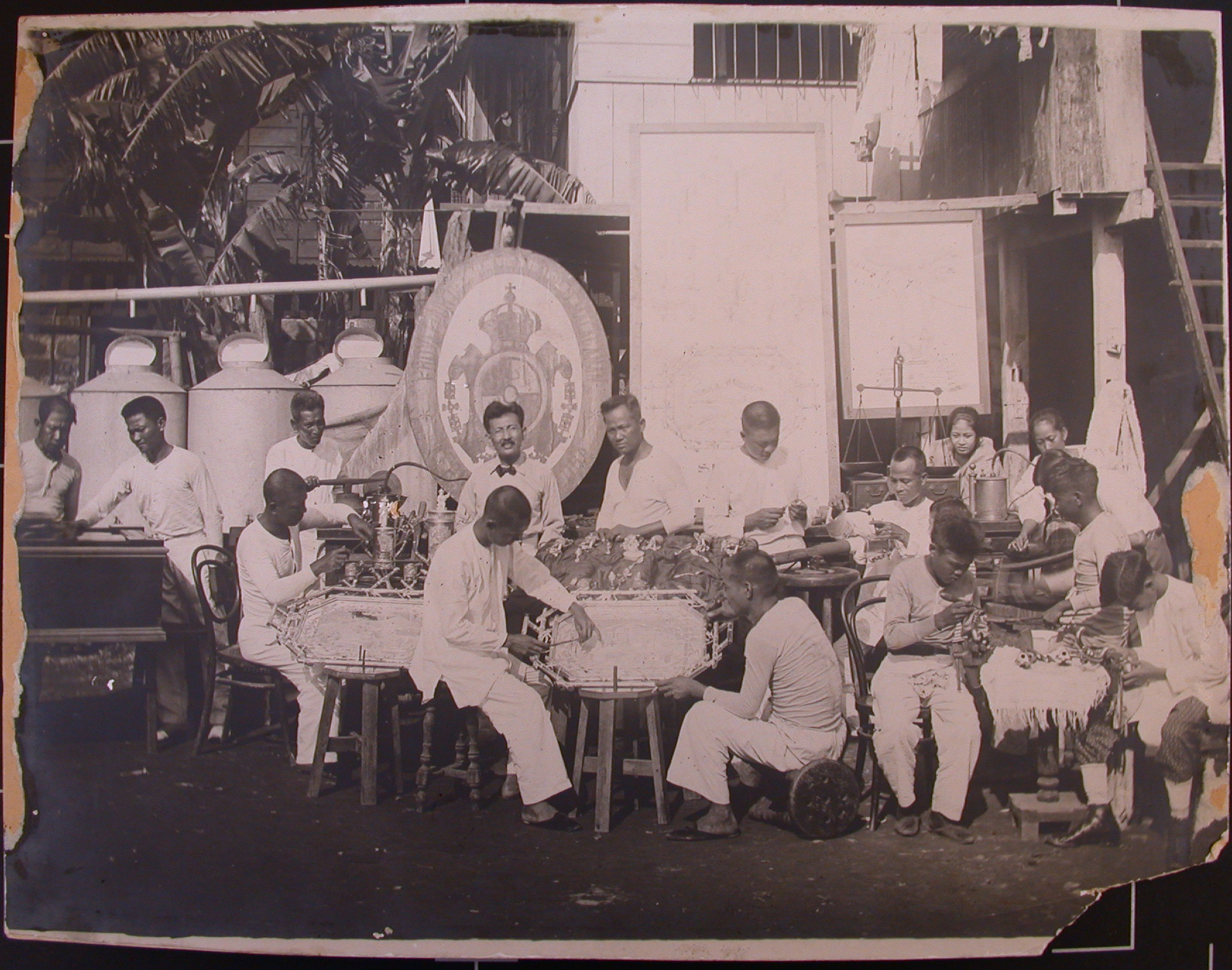 The Zamora atelier. Owner and Photo credit: Department of Invertebrate Zoology at the Smithsonian Institution's National Museum of Natural History
One of the displays in St. Louis that received media attention was the 33-piece silver-plated serving set produced by Tomas and Fernando Zamora of Manila. Both men probably received training from their father, Mauricio Zamora, who owned a workshop for sculpture, silverwork, and engraving.

Around 1888, Mauricio was commissioned by a religious organization in Manila to create a pen designed for Pope Leo XIII (Carta de los padres, 479-81). In the 1890s his son, Tomas, carried the name of the Zamora studio advertised as the silversmith and engraver of the Royal Palace of Malacañang, the Spanish governor’s palace (Guia Oficial, 6). At the 1895 Exposición Regional de Filipinas held in Manila, the Zamoras—the father and his sons—displayed their capabilities in furniture, woodwork, silverwork, and jewelry (Catalogo, 471, 476, 477, 537).

Only eight years later, the Zamora serving set used the same decorative style developed in the late Spanish colonial period to acquaint the Americans with the Philippine Islands – its natural environment, industries, and inhabitants. 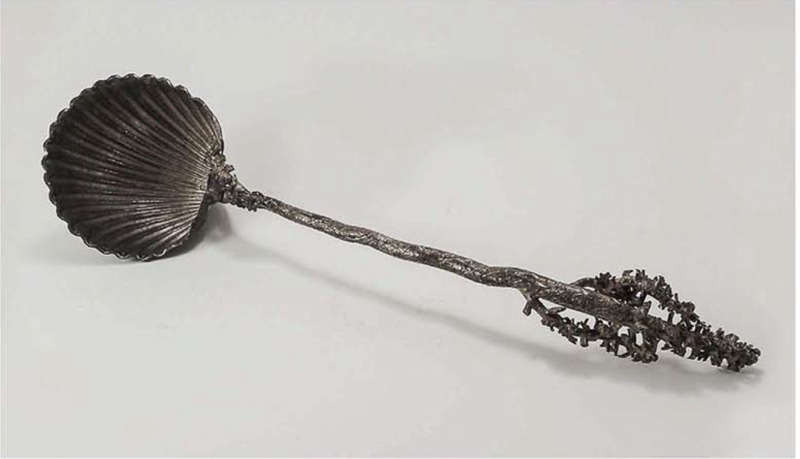 The largest object in the set was a Taclobo shell, which served as a punchbowl. (See Fig.1) It is mounted on a silver base with mermaids playing musical instruments and fish swimming underneath the shell. One of the world’s largest bivalve species, the Taclobo shell was often used as a holy water font in Philippine colonial churches. With the punchbowl was a server with a shell-shaped bowl and coral-like handle. (Fig.2) 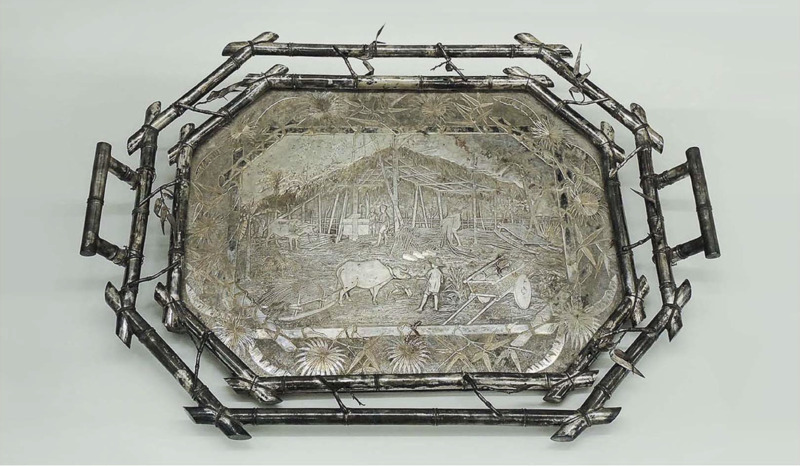 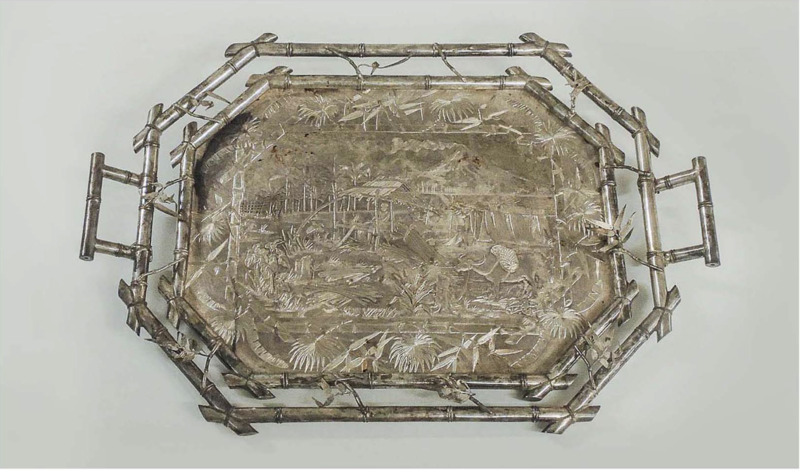 Silver-plated trays engraved with a scene on abaca-fibre processing. Photo: Marisa Ventura Diaz-Etchevehere.
While the clamshell represented the marine resources of the country, it appeared to be separate from the rest of the set, which was ornamented with plant forms from the Philippine landscape. A pair of serving trays, engraved with illustrations of the sugar and abaca industries, had a bamboo-stem border pattern repeated on a three-dimensional frame. Leaves of bamboo, the banana plant and the anahaw (fan palm) wound around the frame. 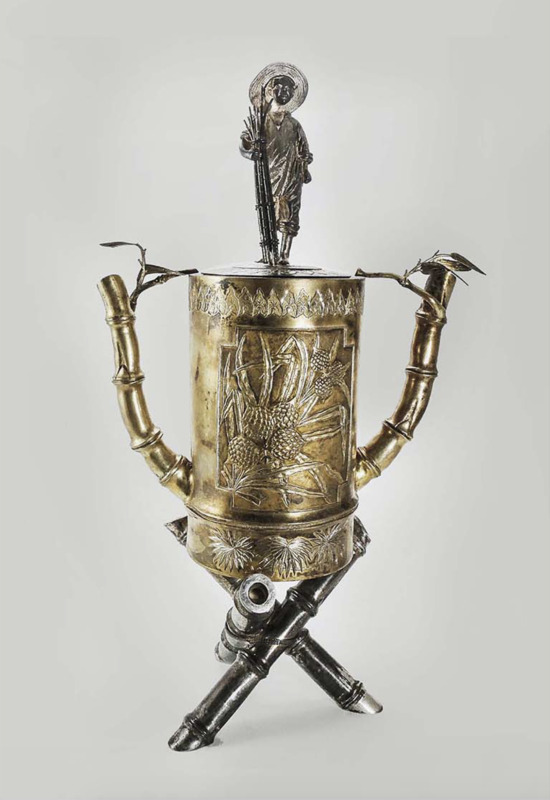 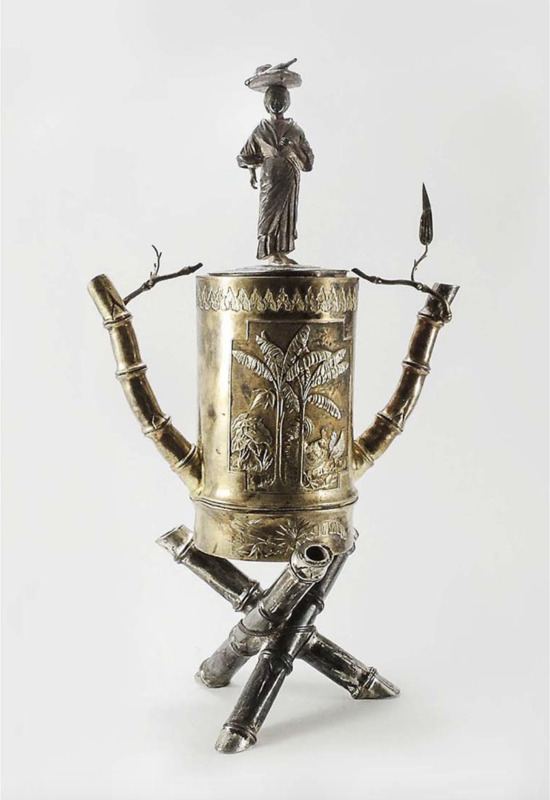 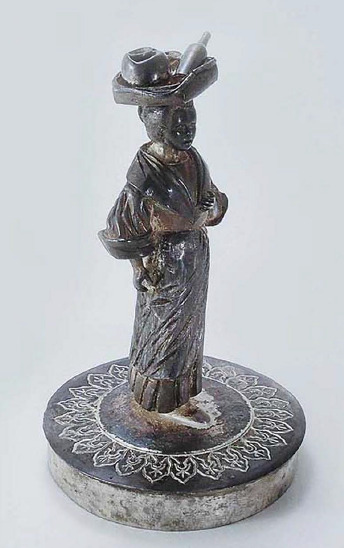 Lid for the creamer. Part of a table service representing Philippine work at the Louisiana Purchase Exposition (St. Louis, Missouri), 1904 (237767) National Museum of Natural History, Smithsonian Institution, United States. Photo: Marisa Ventura Diaz-Etchevehere
On the coffee-and-tea set, three-dimensional figures are mounted on the lids of vessels. For instance, the sugar server’s lid has a figure of a boy with sugarcane stalks resting on his arm. For the creamer, a woman in a mestiza dress balances a basket (with milk bottles) on her head.

These three-dimensional figures were fashioned as tipos del pais; that is, visual representations of inhabitants of a geographical area with reference to race, gender, costume, or occupation. As in many Spanish colonial centres during the late nineteenth century, tipos del pais were part of the costumbrismo genre, which, in the Hispanic world, was “a movement in late eighteenth- and early nineteenth-century visual and literary arts that sought to capture the customs, costumes, and traditions of everyday people and everyday life” (Moriuchi). These images of the local working class were compatible with the scenes from the Philippine countryside engraved in the coffee-and-tea set - thatched bamboo huts, water vessels, the carabao, and a volcano.

While the organizers of the Exposition may have had their own imperial agenda, the Zamora serving set also speaks of the colonized Filipino artists’ openness to the material cultures of Western countries and China, tempered by a desire for a "national" identity. This was expressed in the preference for illustrating local plant forms and tipos del pais. While this was fashionable among artists then, it may be argued that this was also encouraged by the Philippine Reform Movement (1872-92). The latter was formed by Filipino students in Spain who desired equal rights among Spaniards and who, later, developed a national consciousness. Historian John Schumacher wrote that “these men thought of themselves first as Filipinos, and insisted on a distinct Filipino character, culture and national identity” (Schumacher, 18). This consciousness became more prominent in the visual arts of the 1890s and continued towards the following decade, as a second colonization process began under the United States. 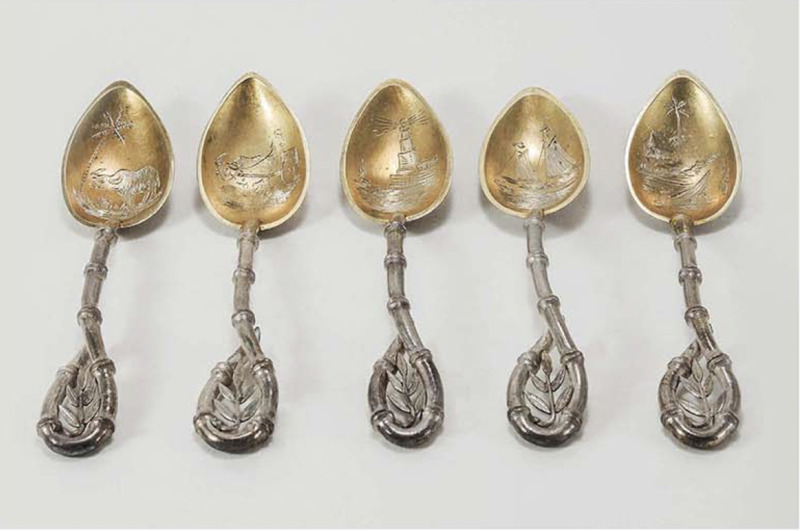 Made from a Tridacna (giant clam) shell—which could weigh up to 500 pounds and live 100 years—and mounted in a sea of silver mermaids, the punch bowl is part of a 32-piece set crafted by Filipino silversmiths, Fernando and Tomás Zamora around 1903.…
2

Coffee pot with a street scene on a decorative panel which includes huts with thatched roofs, coconuts trees and a male figure with a bamboo sled. The lid's handle is a seated figure of a boy wearing a salakot on his head. Sprigs of coffee…
4

Tea pot with a Chinese view on a decorative panel. The lid's knop handle is a Chinese male figure holding up a tea brick. Part of a table service set (237767), National Museum of Natural History, Smithsonian Institution, United States. …
5

Sugar server with screw pine motif on the body, fan palm around the base and stamped taro leaf pattern around the rim, height. The lid's handle is a figure of a boy carrying sugar cane. Part of a table service set (237767), National Museum of…
8

Creamer with banana and taro plants on a decorative panel. The lid for creamer has a knop handle and consists of a female figure wearing the late 19th century traje de mestiza (mestiza dress). Part of a table service set (237767), National Museum of…
9

Cups with carabao motif on decorative panels. The cup's body is in the shape of a bamboo stem with its node forming an uneven line. Part of a table service set (237767), National Museum of Natural History, Smithsonian Institution, United States.…
10

Cups depicting a bridge, a volcano and a rooster on decorative panels. Part of a table service set (237767), National Museum of Natural History, Smithsonian Institution, United States. There are nine other cups in this series, for a total of twelve.…
11

Cups with rustic scenes depicting a boat and some nipa huts on decorative panels. The cup's body is in the shape of a bamboo stem with its node forming an uneven line. Part of a table service set (237767), National Museum of Natural History,…
12

Spoons with incised images of a carabao, a lighthouse, a sailboat, and a rustic scene with bamboo hut. Part of a table service set (237767), National Museum of Natural History, Smithsonian Institution, United States. (Sandra Castro, 2021)
14