Ivory Christ with three nails, dead, with the head inclined towards his right shoulder and the peritoneum knot located on the right hip. He has a strong orientalizing influence when it comes to his clear forehead, his slanted eyes and his softened cheeks. The formal constitution is naive and simplified, although realistic in character. This Hispanic-Philippine Ivory Christ reflects a greater incidence in the anatomy in the thorax and knees. The inlaid work of pompano leaves on the ebony trunk of the cross stands out too. The Hispanic-Philippine sculptures in Santillana are usually subject to western canons, but influenced by the eastern aesthetic education of the artist. That is, they follow models imported from Spanish authors, particularly Andalusians, such as Núñez Delgado (16th century) or Martínez Montañés, (17th century). 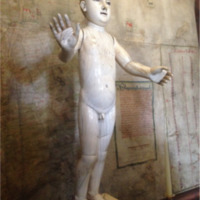 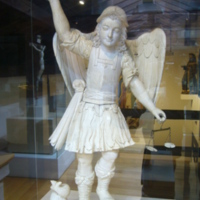 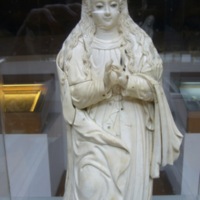