A kris sword of the Maranao-people from the South of Philippines. It has a diminutive ivory pommel for its blade size that might be a later mounting. The fitting of the blade to the handle indicates that it is a later local repair, probably because it has been damaged in use. The red painting on the back and top of the sheath is an unusual feature and the black colour at the toe might be intended to look like buffalo horn.


Livrustkammaren is a museum located at Slottsbacken in the basement under the Royal Palace in Stockholm. The museum is part of the authority Livrustkammaren and Skokloster's castle with the Hallwyl Museum Foundation.

The Armory was originally the Swedish royal family's store of costumes, armor and weapons. The oldest existing inventory in which still preserved objects are housed is from 1548.

The foundation for what today consists of the museum was laid when King Gustav II Adolf in 1628 ordered that his clothes from the campaigns in Poland should be preserved "uthi Rust-Cammaren to an eternal memory".

This meant that the Armory was given more character as a historical collection. In the 1660s, parts of the collections were moved to Queen Kristina's gazebo and in the 1690s, these objects and remaining objects were moved from the castle to the palace Makalös, which was thereby named "The Arsenal". The collections were then moved around between different places, including Fredrikshov's castle and Arvfursten's palace. During the 19th century, the armor chamber was united with the royal cloakroom, and the collections were returned to the castle in 1884, where they were exhibited until 1906, when they were moved and exhibited at the Nordic Museum.

In 1978, the collections moved back to the castle.

(Charles XV's collection no. 124. Testamentary gift to LRK 1872, kept in the Persian room at Stockholm Castle. Deposit to the Ethnographic Museum 1905.)

Dagger of the Kris type, alternative spelling keris. This type of dagger originates from Indonesia and has a distinctive appearance. In addition to a weapon, the crisis is also to be regarded as an important cult object. The Kris symbolizes power, authority and heroism. They are used by guards and dancers in the Javanese courts of Yogyakarta and Surakarta. But even practitioners of pencak silat use the kris.

This kris has a blade of damask steel, at the bracket a recess and two short grooves. Steel blade, straight with wavy edge. Bracket of brass with button of yellowish horn. This kris has an associated sheath with no. 1889.04.4053 in the museum.

A kris consists of three parts: the blade "wilah", the mount "hulu" and the ski "warangka". The different expressions and aesthetics of the kris are summarized as "dhapur", the blade's pattern "pamor" and its age and provenance "tangguh". All these parts are of great importance for the status and characteristics of the kris.

It is considered important that the bearer of a kris has created a close and personal relationship to their kris, as the kris is seen to carry great power. This means that the manufacturing process is symbolically and religiously charged and requires great knowledge. The blacksmith forges the daggers with great care during intense prayers, they mix in various carefully selected materials in the steel and fold the steel over itself countless times. The result is damasked patterns in the blade, so-called "pamor". Each kris therefore becomes unique and is considered to possess different characteristics. A legend is that kris are so powerful that people you point to with them have an imminent death to be expected. It is also common for the owner of a kris to dedicate rituals and offerings in temples to the kris to bring happiness.

The art and craft of forging the kris has been recognised in 2005 as the Masterpieces of the Oral and Intangible Heritage of Humanity by UNESCO.

Sheath related to this Kris

Translated from Swedish by Google Translate
Record accessed Dec. 2020
Edited for grammar by the Mapping team 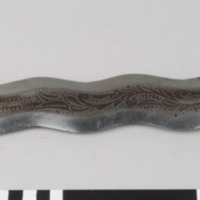 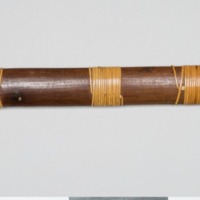 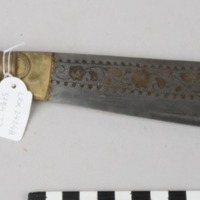 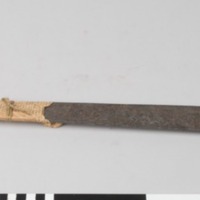