From information provided by Dr Andres Reyes, 25 July 2018: "The barong tagalog, of which these are two examples, is proper attire for men during formal occasions in the Philippines. It is traditionally long-sleeved, worn untucked, and made of embroidered piña cloth. The style of the embroidery changed with fashion. In the 1960s and early 1970s, when I was growing up in Manila, there was a taste for elaborate embroidery on the barong, but there is a preference now for simpler patterning. Studs and cufflinks may be used for particular styles, or else buttons are attached to the cuffs and shirtfront. A plain white T-shirt is worn underneath the translucent attire. Dark trousers, dark socks, and black shoes complete the ensemble. The equivalent formal attire for women in the Philippines is called the Maria Clara dress or terno, also traditionally made of piña. "Cousin to the barong tagalog is the polo barong, usually made of embroidered cotton, and with short sleeves. The polo barong is intended for less formal occasions. "These two examples of the barong tagalog belonged to my father, Jose M. Reyes (25 February 1931 - 18 September 1998). He was born in Manila and went to the United States in 1950 after winning a scholarship to the US Merchant Marine Academy in Kingspoint, New York. After graduation from Kingspoint in 1954, he completed a second bachelor's degree in Naval Architecture at MIT in Cambridge, Massachusetts, in 1956. Shortly afterwards, he returned to Manila to run a ship-brokerage, Reyes and Lim Company (Lim had won the other scholarship from the Philippines to Kingspoint in 1950). "With the political troubles brought on by the declaration of Martial Law in the Philippines in 1972, he and the family moved to Québec, to a town just outside Montreal, in 1977, returning to the Philippines in 1986, after the so-called "People Power Revolution". He maintained the house in Canada, however, and eventually, in the last two or so years of his life, became the head of the Philippines consulate in Québec. "When the family sold the house in Canada in 2011, a dozen or so years after my father had died, I cleared out the contents and came upon these two barong tagalog outfits in his closet. I imagine that they would have been tailored in the 1980s or early 1990s and used as formal wear for some of his consular duties. I have kept them among my own possessions since 2011, but feel that they may be more useful now if they are preserved at an anthropological museum as examples of a style of formal wear typical of the late twentieth-century Philippines." 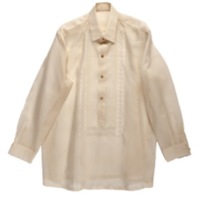 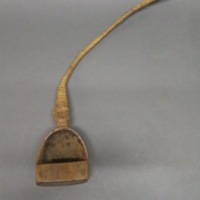 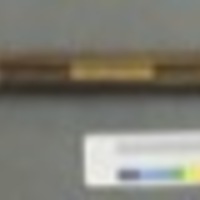 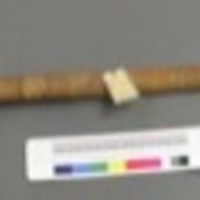