Object description: Keris [.1] with wavy blade and silver bound grip. With a wooden sheath in two pieces [.2 and .3] The blade has two deep grooves at the base and two lighter grooves that follow the contours of the blade on both surfaces. A wavy pattern produced when the blade was forged [?damascening] is visible on both sides of the blade. It also has a spur and comb at its base. The pommel is made of wood and is rounded on one side with an upwards projection. The grip is bound with a sheet of silver, decorated with stamped or incised scrolling and diamond shaped patterns. The sheath has a T shaped mouth [.3] that is now detached. The body of the sheath [.2] is straight and tapers. It is bound at five points with silver bands and has a decorated silver chape. The sheath has been varnished. [SM 03/01/2008]

Research notes: The large number of keris forms reflects the wide distribution of this weapon across Malaysia and Indonesia. There are seven major recognised areas of keris manufacturing: Java, Bali, Madura, Sumatra, the Malay Peninsula, Moro (Mindanao, Philippines) and Sajen. As far as can be deduced from bas relief depictions of warriors on the friezes of Buddhist temples, the keris had its origin on Java some time around the 14th century, spreading westwards and eastwards in following centuries (Egerton, 1896; Maisey 1998). The keris is a distinctive weapon, with an asymmetrical rapier-like blade adapted for stabbing, and a quite unique ‘pistol-grip’ hilt – significantly more ergonomic for the actual act of stabbing than almost all other rapier forms. We see such asymmetrical hilts in later European cavalry sabres, although this was a late development, and never popular. Keris were also used for rapid execution in certain Malay states, being thrust down diagonally behind the collarbone, through the lung and into the heart. Death was instantaneous. Perhaps the most distinctive characteristic of keris after the unique blade shape is that of pamor or pattern-welding. This is often mistakenly described as a form of damascening, although the two processes are completely different. Whereas damascening in the true Indo-Persian tradition is achieved through the slow cooling of the forged steel over days, encouraging the natural formation of crystalline structures of Martensite steel and Cementite iron, pamor is achieved through the artificial layering of wires or plates of pig iron and meteoric nickel steel, which are then folded and rippled into specific patterns. This technique is only known outside of the range of the keris in Japan, although the Japanese technique is considerably more limited than the Malay-Indonesian. Several different forms of pamor patterning are achievable, which can give the blade a wood-like grain, spots like leopardskin, and so on. The pamor was historically believed by Javanese people to impart certain mystical powers to the blade (Maryon, 1960; Frankel, 1963). Keris were traditionally understood to have great mystical power among the Malay people, and each was believed to be inhabited by a spirit. The nature of the keris’ spirit is reflected by its pamor, and by the blade shape or dapur. It was considered important for a prospective owner to acquire a keris whose spiritual persona was compatible with his own. Some keris were transmitted through family lineages as heirlooms. Keris Parts Terms: Blade (Wilah); Asymmetrical Blade Base (an additional welded fillet) (Ganja); Pistol-Gripped Hilt (Ukiran); Scabbard (Sampir or Warangka); Wide Scabbard-Mouth Piece (Batang). Research Conducted for DCF Cutting Edge 2006/2007 [AM]. 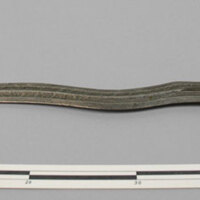