Missionaries and Christian emigrants in the Spanish colonies needed devotional images for church and private use. This lead figure was cast from a mould, from which further copies would have been made. Christ’s skin has been painted a pale colour, which probably imitates the carved ivory prototypes that inspired the figure. It also highlights his vividly painted wounds, which glisten realistically with applied glass droplets. This small crucifix is a devotional object, one perhaps used by Spanish missionaries in South America, or possibly in the Philippines, during the time the Spanish were in power there. It could alternatively have been made in Spain itself, although the form of the loincloth is reminiscent of those seen in carved ivores made in the Philippines when it was under Spanish rule. The facial features and form of the body suggest it dates from the mid-17th century. The fact that the figure is of lead means that it was cast from a mould, so that several copies could be made. The paint and inserted glass droplets would be applied subsequently. The glass droplets representing blood recall the moulded glass tears sometimes seen on the cheeks of baroque wood busts of the Sorrowing Virgin made in Spain.

Painted lead, with inset glass globules, imitating drops of blood; Possibly made in the Parian. 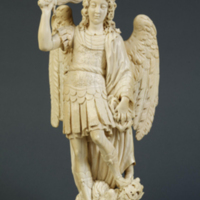 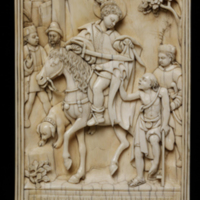 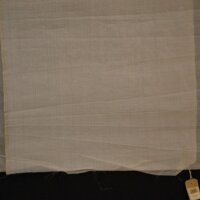 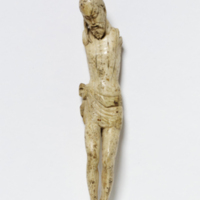