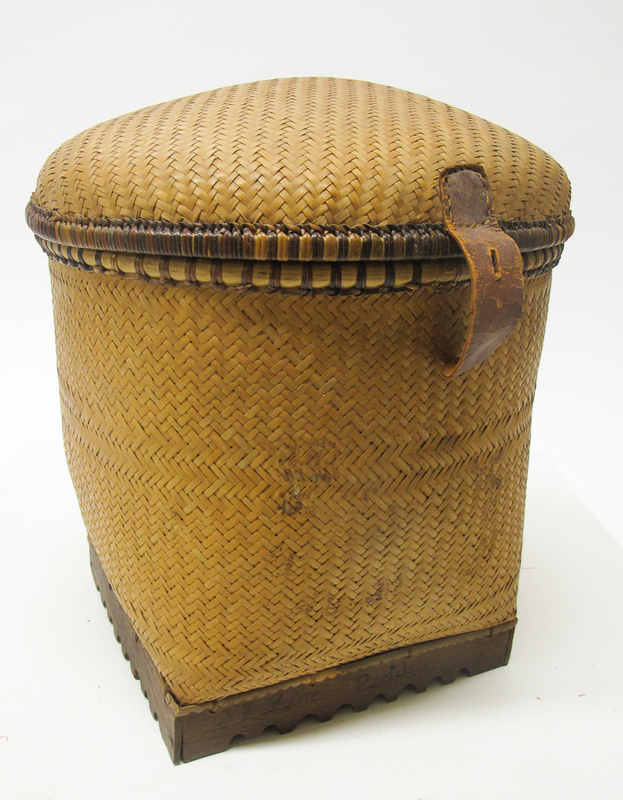 43597: Philippine Basket, undated. Identifier number 09.1029, courtesy of the Rhode Island School of Design Museum, Providence, RI, and a gift of the American Museum of Natural History

The Philippine Collection at RISD
by Cristina Juan*

There is a small but interesting collection of material from the Philippines, assembled over more than a century from a variety of sources. At the Museum of Art at the Rhode Island School of Design (RISD) in Providence, Rhode Island, there is a total of 144 items in the Philippine collection. (Only 102 items were added to Mapping site because some were made beyond 1959).

About 60 percent of the material came from the St Louis Fair of 1904, and was donated to the RISD Museum by Dr. Hermon Carey Bumpus (1862-1943) the first director of the American Museum of Natural History (AMNH) in New York. When the Fair ended in December of 1904, the vast amounts of material culture collected from all over the Philippines were sent to the AMNH, the National Museum of Natural History and the Philadelphia Commercial Museum. The AMNH received the bulk of the St Louis materials (about 4027 items) and soon became the major source of donations and exchanges with other museums all over the world (including the Peabody Museum in Harvard, the Liverpool Museum in the UK and several museums in Germany including Stuttgart and Dresden).

In a letter dated 30th of December, 1908, Bumpus replies to Mrs Radeke (Eliza Greene Metcalf Radeke, the founder of Rhode Island School of Design) by first apologizing for the 7 day delay in his reply to her request to “give something of use to the School of Design." He invites her or someone from RISD to visit the AMNH and “I will then show you certain textiles, basketry, etc., that I think might be of use to you.”

A second letter from Bumpus, dated 22 July 1909, sends “a list of specimens of Philippine material” with another apology for sending the materials late. It is clear from the letter that E G Radeke herself went to the AMNH to pick out what she thought would be most “adaptable to the needs of the School.”

The original list Bumpus enclosed with the letter has 82 artefacts, a majority of them are baskets, with several bamboo trays, fish nets, some textiles and a few clay containers and pots. Each item has some granular provenience – e.g. ornament of dyed buri palm leaf from Argao, Cebu, a cooking pot from Ormoc Leyte or a table stand of palm leaf fibre from Juban, Tayabas. (the Mapping Project is in the process of collating the old accession numbers of the AMNH with the current RISD catalog numbers so we can add the geograhical provenience of the materials).

It seemed that additional artefacts were donated after this first tranche, perhaps resulting from Bumpus’ invitation to write him again “ If we have not in all cases given the kind of material that you most desire…”
An additional note from the AMNH inventory list  show that a few other samples of hemp and cotton cloth and some drinking vessels were added to the collection.

A letter of acknowledgment and thanks from EG Radeke on behalf of the Board of Trustees of RISD is sent to Bumpus on 16 September 1909. She thanks him for “this valuable material” adding that “ It will be of special interest to the students in the manual arts.” It would be inetresting  to see how the materials were consequently used in the RISD curriculum --whether the objects were treated as anthropological specimens or used as work models. The lack of provenience data and research notes in the RISD records seem to point to the latter.

An interesting memento from the St Louis World Fair is what is most likely a throw pillow cover souvenir made for the event. It features a collage of photos of the people “shown” during the fair, including men from the Philippine Cordillera and  some Visayan women ascending the steps of a nipa hut. The cloth is photo printed in a plain weave cotton and dated after 1904. The item was donated by Mrs. Constance Wharton Smith, the widow of Henry St John Smith, a well-known banker and world traveller. 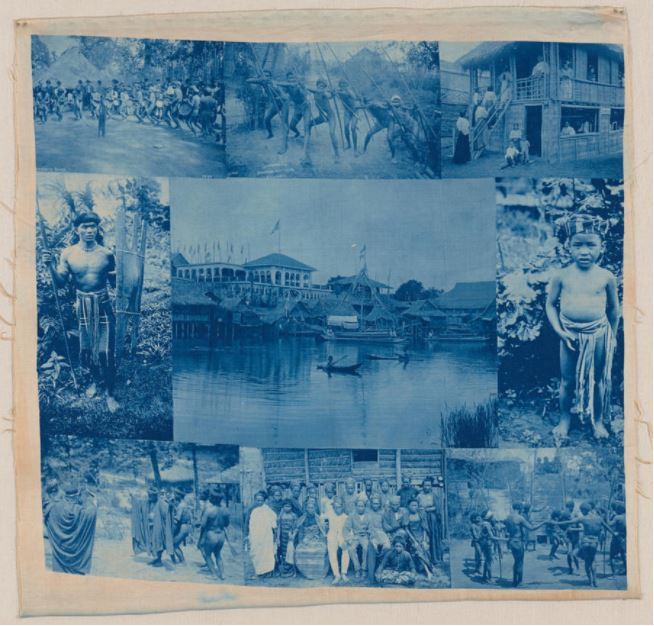 The Louisiana Purchase Exposition Souvenir Textile, after 1904.  Acc. No. 58.165.15 Copyright with permission from the Rhode Island School of Design Museum
The textile was exhibited along with other depictions of the US Flag of former colonies (the centremost panel of this souvenir displays US flags flying over the Philippine Fair site) From the exhibit catalog, mention is made of several "Igorot" personalities who became well known, including Chief Antonio (middle left panel) and Antero Cabrera (known as Balonglong to his people), an orphan who acted as the group’s interpreter. Cabrera and many others went back to Bontoc after being shown at Coney Island and other expositions. In 2000, Cabrera’s granddaughter, Mia Antero Apolinar Abeya, returned to St. Louis to speak at Wydown Middle School, which now sits where the St. Louis World’s Fair was once held. Her message commemorated her grandfather and the people whose culture had been exploited.

Aside from the major donation from the AMNH in 1908, other pieces came into the RISD through individual collectors. Three of the earliest pieces in the collection were donated by the widow of James Comly McCoy (1862-1934) , author of Jesuit Relations of Canada, 1632-1673: A Bibliography and a well-known collector. The three Philippine pieces, dating from the mid 1800’s have been chosen for display at various exhibits at the RISD.

Figure 3. Blouse (Baro-Camisa) ca. 1800s, made of Piña fiber and embellished with Sombrado appliqué. Acc. No. 14.414.Courtesy of the Rhode Island School of Design Museum
The Baro-Camisa was featured in an exhibition called "Drawn From The Collection Drawn from the Collection: Part of the Fabric (October 7, 1998–January 17, 1999), where ten artists were asked to respond to their individually selected works from The RISD Museum’s Asian textile collection.

“I transcend the human experience when I view something truly lovely. I selected this Philippine embroidered blouse because of its ephemeral qualities. The experience of looking at an object and seeing through it at the same time appeals to what I understand about life and eternity. I was impressed with how little it needed to physically sustain itself: a delicate line defining its pattern and a transparent fabric to shape its purpose.”

This baro-camisa is accompanied by a pañuelo ( Spanish) or Alampay (Filipino) or fichu (French), a starched square neckerchief made of the same sheer material and worn over the camisa. The pañuelo is square-shaped and would have been folded in half into a triangle when worn. The pañuelo is an integral and distinctive part of the 18th and 19th centuries baro't saya and traje de mestiza ensembles of Filipino women as they brought modesty to the relatively sheer or sometimes low neckline of the camisa. 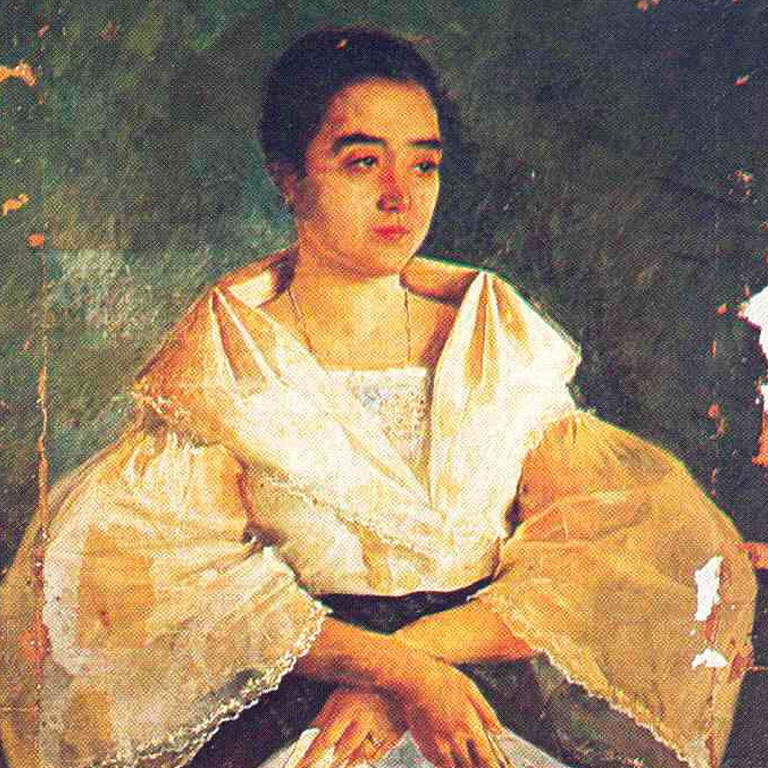 Detail from La Bulaquena by Juan Luna. (c.1895) Creative Commons copyright from the National Museum of the Arts, Philippines. 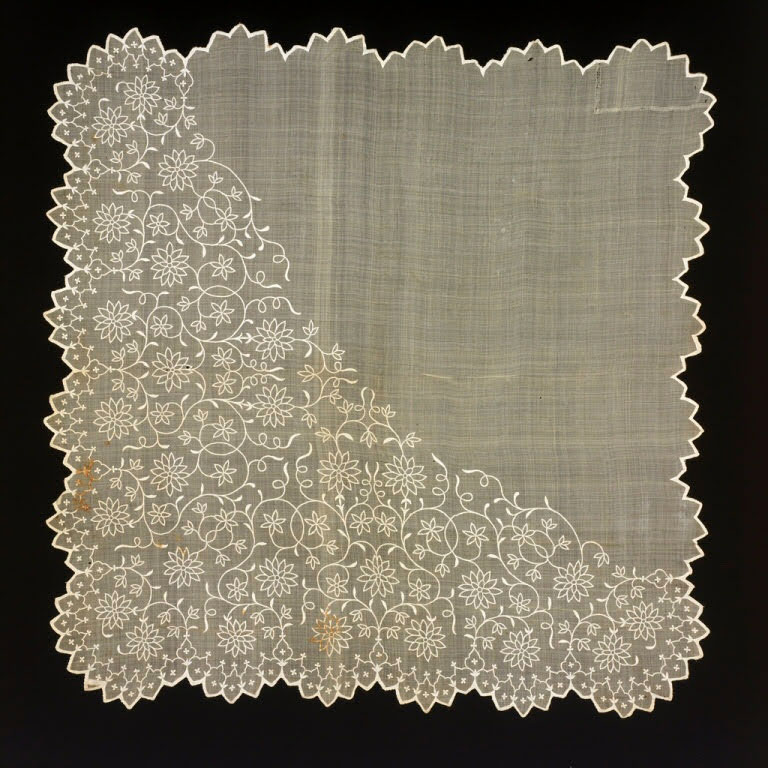 Figure 4. Pañuelo(Fichu) ca. 1800s, made of Piña fiber and embellished with "Sombrado" appliqué. Acc. No.  14.413. Courtesy of the Rhode Island School of Design Museum

Other notable pieces in the Philippine collection are six works by Alfonso Ossorio. All six works were gifted to RISD Museum by the Alfonso Ossorio Foundation, but only the pre-1959 pieces are included in the Mapping site (from 1946-1959) 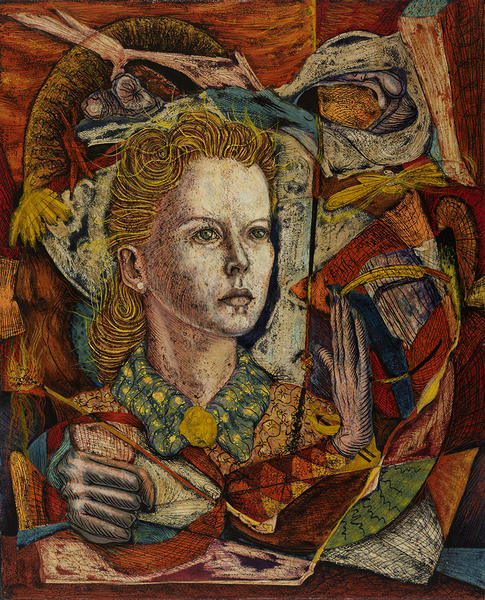 Figure 5. Ida Lupino, 1946 by Alfonso Ossorio. Acc no. 2007.115.3 Donated to the RISD by the Alfonso Ossorio Foundation; copyright use with permission from the Rhode Island School of Design Museum 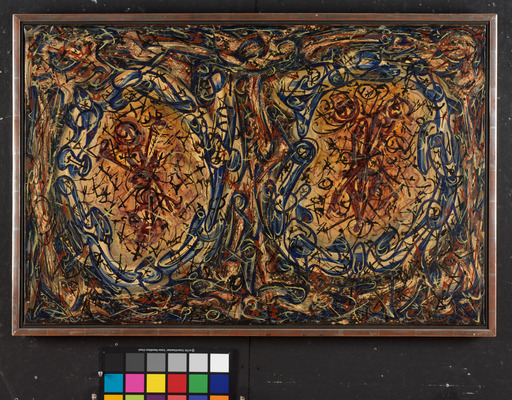 Figure 6. Dividing Cells Alfonso Ossorio (Filipino-American, 1916-1990), oil on canvas. Acc no. 2007:115.1. Donated to the RISD by the Alfonso Ossorio Foundation; copyright use with permission from the Rhode Island School of Design Museum.

Alfonso Angel Yangco Ossorio (1916–1990) was a Filipino American abstract expressionist artist who was born in Manila in 1916 to wealthy Filipino parents from the province of Negros Occidental. His heritage was Hispanic, Filipino, and Chinese. Between the ages of eight and thirteen, he attended school in England. At age fourteen, he moved to the United States. Ossorio attended Portsmouth Priory (now Portsmouth Abbey School) in Rhode Island, graduating in 1934. From 1934 to 1938, he studied fine art at Harvard University and then continued his studies at the Rhode Island School of Design. He became an American citizen in 1933 and served as a medical illustrator in the United States Army during World War II.

The RISD collection has a good range of Ossorio’s ouvre. The early Ossorios, inspired by both the detailed paintings of the Northern Renaissance and the anxious, dream-like imagery of the European Surrealists is shown in his portrait of actress Ida Lupino (American, 1918–1995). 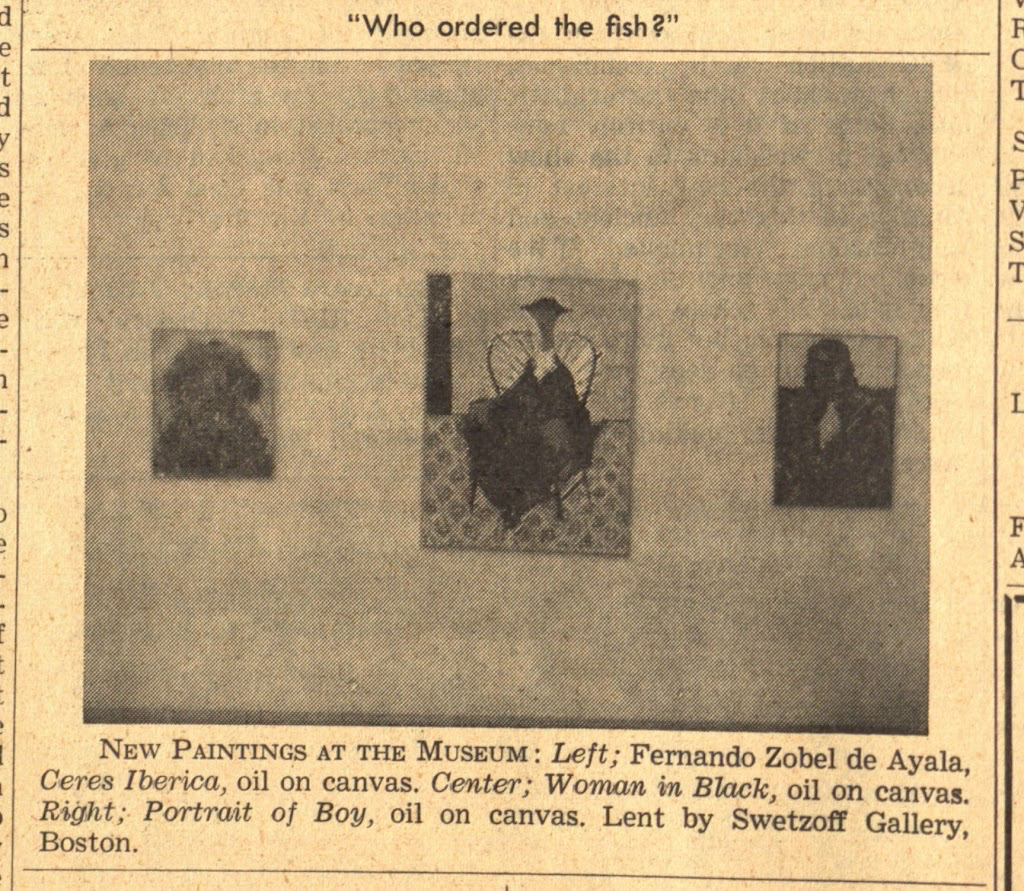 A page from BlockPrint, a student art folio, featuring the three paintings by Fernando Zobel de Ayala Y Montojo. From the museum digital archives, courtesy of Rhode Island School of Design Museum, Providence, RI.
From 1951 and onward, Ossorio became an admirer and early collector of the paintings of Jackson Pollock who counted him as a good friend, and whose works influenced and were influenced by Ossorio. The more abstracted forms of his later style is shown in Dividing Cells, ca.1951.

Aside from Ossorio, Fernando Zobel De Ayala Y Montojo (1924–1984) who was spending time between Madrid and the Philippines was a visiting student at RISD. He took art classes in the mid 1950s and was part of a small exhibition held at the Museum of Art. The exhibition was featured in a catalogue published by the RISD Museum in 1955. Three of his paintings were also featured in BlockPrint, the official art folio of RISD students.

* With the invaluable help of Noel Jordan Racca who did initial research and added all the items into the mapping site and the  RISD Staff - Douglas Doe (RISD Archives), Kate Irvin (Department of Costumes and Textiles RISD Museum of Art) Nicole Amaral and Sionan Guenther (RISD Museum Image Request) and Denise Bastien( Documentation and Digital Resources) REFERENCES :

30 March 2022 Dallow, Jessica and Colleen Thomas, From the Molecular to the Galactic, The Art of Max Ernst and Alfonso Ossorio, Chapel Hill, North Carolina, Ackland Art Museum, the University of North Carolina at Chapel Hill, 2000.

Browse 102 Items in this collection.